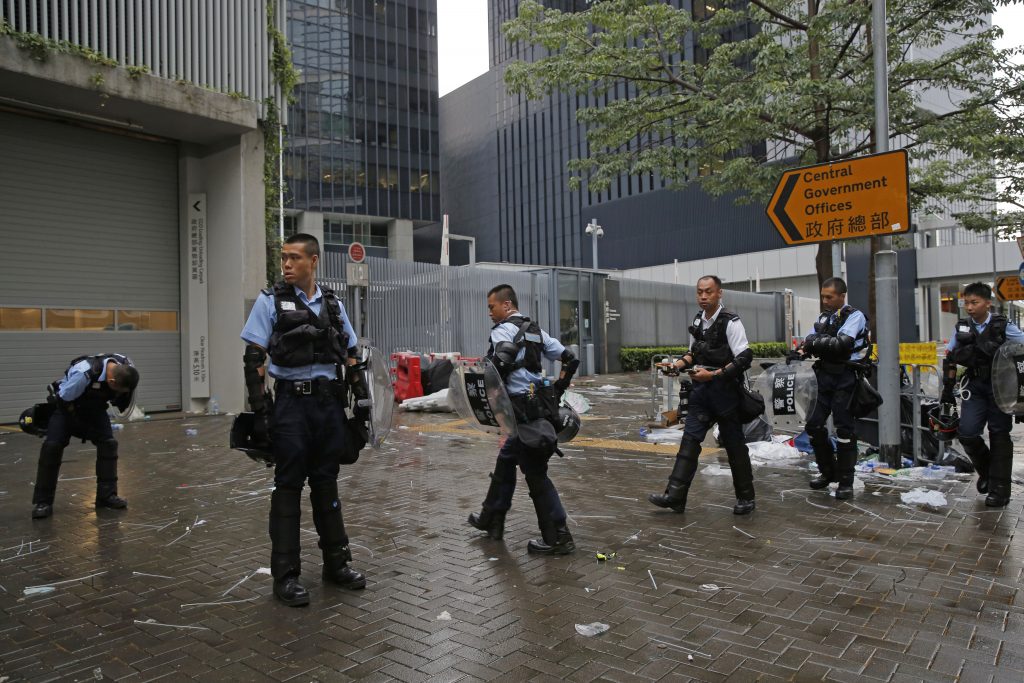 Scuffles broke out between demonstrators and police in Hong Kong on Thursday as hundreds of people persevered with a protest against an extradition law with mainland China, a day after police fired tear gas and rubber bullets to break up big crowds.

Protests around the city’s legislature on Wednesday forced the postponement of debate on the extradition bill, which many people in Hong Kong fear will undermine freedoms and confidence in the commercial hub.

Hong Kong‘s China-backed Chief Executive Carrie Lam condemned the violence and urged a swift restoration of order but has vowed to press ahead with the legislation despite the reservations about it, including within the business community.

The number of protesters milling about outside the legislature in the financial district fell overnight but rose again through the day on Thursday to about 1,000 at one stage.

They expect the legislature, which has a majority of pro-Beijing members, will try to hold the debate at some stage, though it issued a notice saying there would be no session on Thursday.

Earlier, some protesters tried to stop police from removing supplies of face masks and food, and scuffles broke out.

A clean-up got underway to clear debris like broken umbrellas, helmets, plastic water bottles and barricades from the streets after the previous day’s clashes, when police fired rubber bullets, tear gas and pepper spray in a series of skirmishes to clear demonstrators from the legislature.

Officials said 72 people were admitted to a hospital.

Hong Kong Police Commissioner Stephen Lo He said what began as a peaceful gathering on Wednesday had degenerated into a riot with protesters “acting violently in an organized manner.”

Police arrested 11 people while 22 officers were injured and police had fired about 150 tear gas canisters, he said.

In Beijing Foreign Ministry spokesman Geng Shuang said the Chinese government “strongly condemns the violent behavior and we support the [Hong Kong] government in dealing with it according to law.”