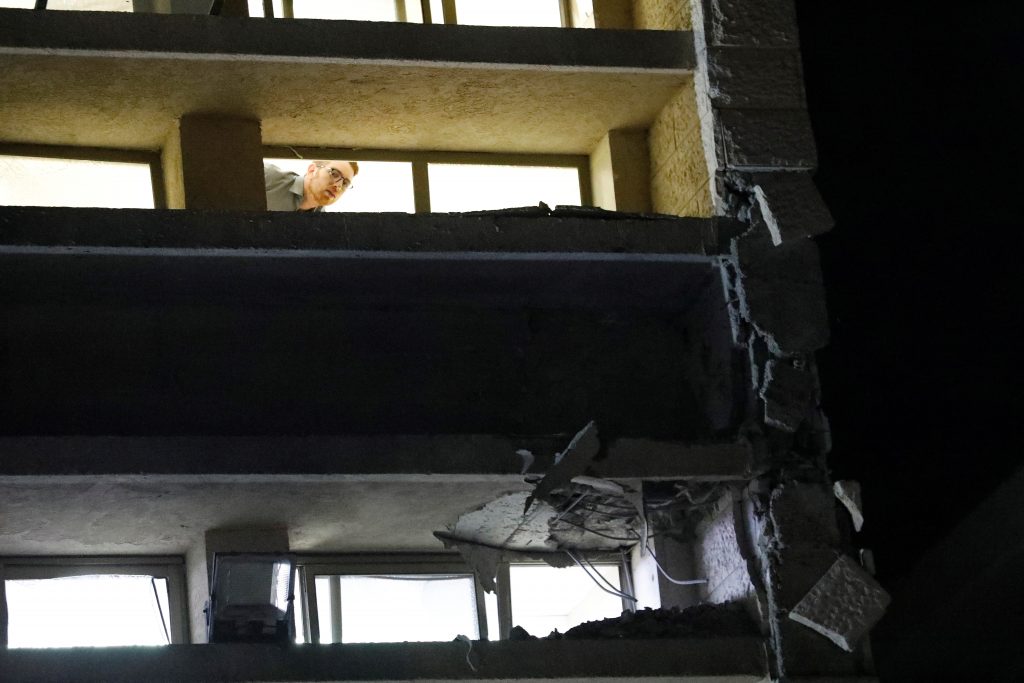 A rocket fired at southern Israel from the Gaza Strip struck a Hesder yeshiva in the center of Sderot on Thursday night, according to initial reports.

B’chasdei shamayim, no injuries were reported. Most of the talmidim had already left the yeshiva to spend Shabbos with their families, according to Ynet.

Police were surveying damage to the building and collecting fragments from the rocket. Its point of impact—where a large chunk had been taken out of an upper story—was visible in photos taken at the scene. Rubble was strewn on the ground in front of the building, and there were broken windows, as well.

Asher Pizam, an eyewitness, told Channel 13: “We were in a weekly shiur when we heard the Red Alert and then a huge explosion. We went out and saw a lot of damage was done to the place. It’s incredibly scary. Things cannot go on like this.”

Yisrael Beyteinu chairman and former Defense Minister Avigdor Liberman issued a statement in response to the attack: “Dear residents of the south, allow me to express my deep sorrow for the untimely passing of your sense of security. This is precisely why I resigned as Defense Minister. We must bury the policy of ‘managing the conflict’ and revive Israel’s deterrence.”

United Right chairman Rabbi Rafi Peretz said that “tonight, the leaders of Hamas must be held accountable. This is our ethical obligation to all the residents of the area and to all citizens of Israel.”

Just a short while before the attack on Sderot, Khalil al-Haya, a senior Hamas official appealed to Egypt, Qatar and the United Nations to step in to salvage the truce with Israel. He blamed the uptick of violence on Israel due to its failure to live up to agreements.

Egyptian security officials were said to be on their way to Gaza for further mediation efforts between Hamas and Israel.

On Thursday morning, Benny Gantz had criticized Israeli Prime Minister Binyamin Netanyahu for not taking a tougher line with the Gaza terrorists, following a rocket launch at southern Israel and a wave of balloon incendiaries, and as a Hamas official threatened further escalation.

“Netanyahu is only strong with words,” Gantz, head of the Blue and White party, said in a statement. “The continued rocket fire by Hamas is evidence that we have lost our deterrence.

“Only exacting an immediate heavy price from Hamas will clarify that Israel doesn’t only talk, but also uses force.”