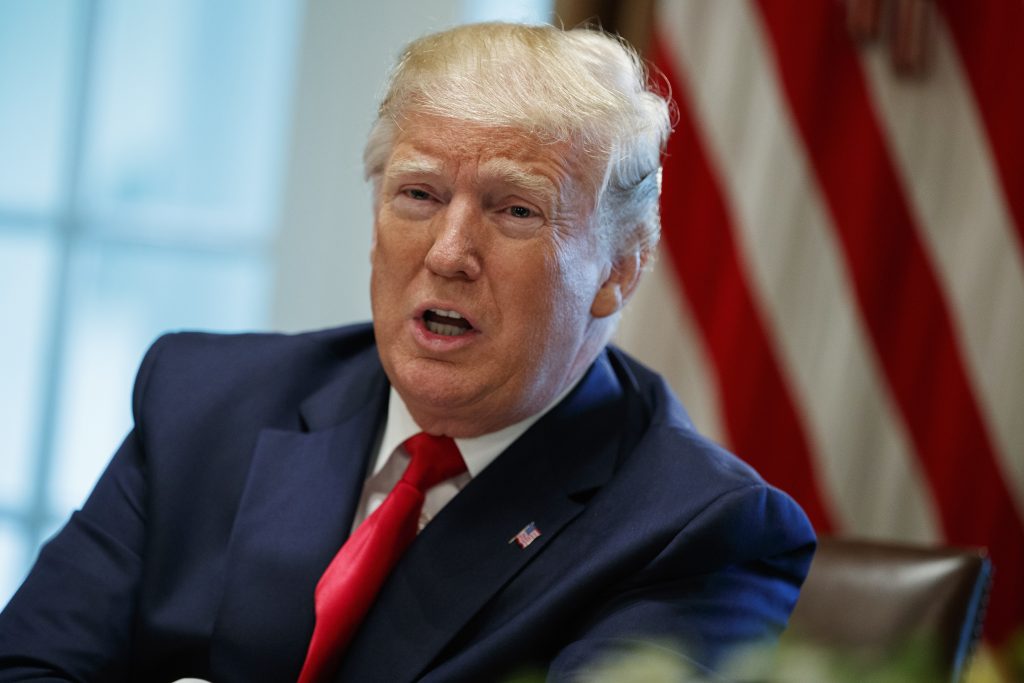 President Donald Trump’s assertion that he would be open to accepting a foreign power’s help in his 2020 campaign ricocheted through Washington on Thursday, with Democrats condemning it as a call for further election interference and Republicans struggling to defend his comments.

Trump seemed to dismiss the threat posed by Russia’s interference in the 2016 election, one that led to sweeping indictments by special counsel Robert Mueller, and his incendiary remarks come as congressional investigations into the meddling have quickened.

Asked by ABC News what he would do if Russia or another country offered him dirt on his election opponent, Trump said: “I think I’d want to hear it.” He added that he’d have no obligation to call the FBI. “There’s nothing wrong with listening.”

The Democratic denunciations were swift and overwhelming.

“It’s a very sad thing that he doesn’t know his right from wrong,” said House Speaker Nancy Pelosi on Thursday. “It’s an invasion of our democracy. Everybody in the country should be totally appalled by what the president said.”

Special counsel Robert Mueller painstakingly documented Russian efforts to boost Trump’s campaign and undermine that of his Democratic rival. But while Mueller’s investigation didn’t establish a criminal conspiracy between Russia and Trump’s campaign, Trump repeatedly praised WikiLeaks in 2016 and at one point implored hackers to dig up dirt on Hillary Clinton — “Russia, if you’re listening,” he said.

Democrats said Trump, in his interview, was essentially asking if Russia is still listening.

“This man has so little moral compass that he doesn’t understand that taking help from any foreign government during a political campaign is an assault on our democracy,” said Sen. Mark Warner of Virginia, top Democrat on the Senate’s intelligence committee.

Democratic presidential contender Joe Biden tweeted: “President Trump is once again welcoming foreign interference in our elections. This isn’t about politics. It is a threat to our national security. An American President should not seek their aid and abet those who seek to undermine democracy.”

The role of Trump’s eldest son, Donald Trump Jr., in organizing a 2016 meeting with a Russian lawyer offering negative information on Clinton, was a focus of Mueller’s probe of Russian meddling in the last presidential campaign.

Congressional Republicans, usually loath to criticize Trump, struggled to strike a balance between condemning foreign interference and avoiding harsh words about the president:

Sen. Lindsey Graham of South Carolina, a staunch Trump ally, said “I think it’s a mistake of law. I don’t want to send a signal to encourage this.”

But he likened Trump’s stance to Democratic support for a research firm run by British ex-spy Christopher Steele that explored Trump’s ties to Russia in the last campaign.

The Republicans’ 2012 presidential nominee, Mitt Romney, now senator from Utah, said his campaign would have immediately notified the authorities if offered foreign help.

And Idaho Sen. Jim Risch was at a loss for words in the matter: “I do not want to do any interviews on that subject.”

Just last month, Trump pledged not to use information stolen by foreign adversaries in his 2020 re-election campaign, even as he wrongly insisted he hadn’t used such information to his benefit in 2016.

FBI Director Christopher Wray told lawmakers that Donald Trump Jr., as an organizer of the meeting with the Russian who offered the dirt on Clinton, should have called his agency to report the episode.

But Trump, who picked Wray to lead the FBI in 2017, told ABC News that he disagrees.

“The FBI director is wrong,” Trump said. “Life doesn’t work like that.”

Asked whether his advisers should accept information about an opponent if offered by Russia, China or another nation, or call the FBI this time, Trump said, “I think maybe you do both,” expressing openness to reviewing the information.

“I think you might want to listen,” he said. “There’s nothing wrong with listening. If somebody called, from a country — Norway — we have information on your opponent. Oh, I think I’d want to hear it.”

Addressing the controversy Thursday on Twitter, Trump said he talks about “everything” with foreign governments, noting his recent overseas trip and meetings Wednesday with the president of Poland.

“Should I immediately call the FBI about these calls and meetings,” Trump tweeted. “How ridiculous! I would never be trusted again.”