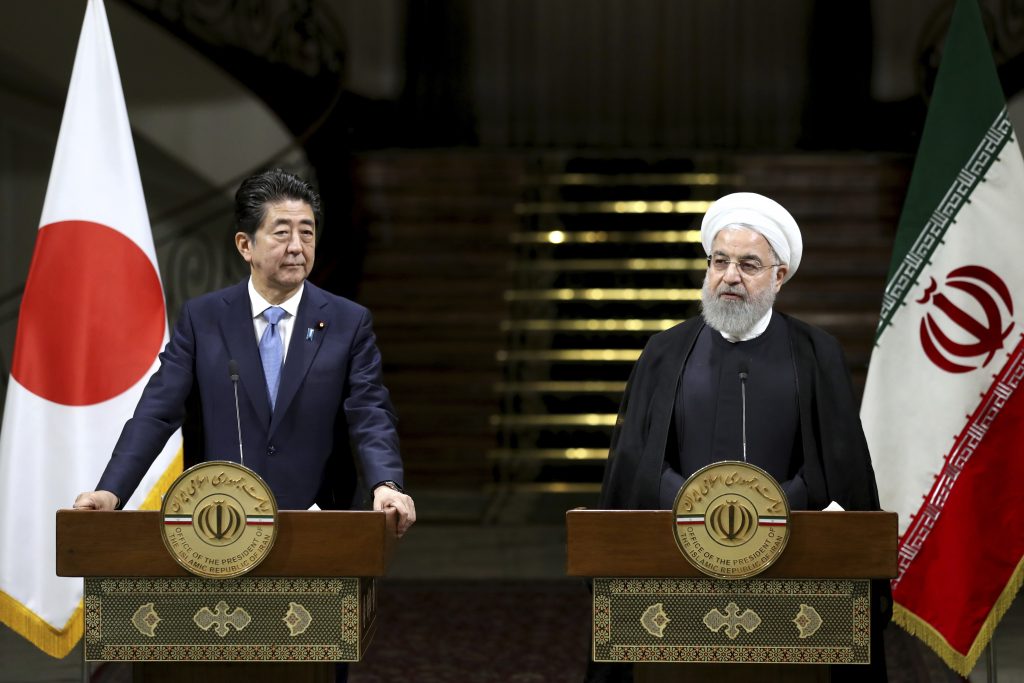 Japanese Prime Minister Shinzo Abe traveled to Tehran on Wednesday to warn that an “accidental conflict” could be sparked amid heightened tensions between Iran and the U.S., a message that came hours after Yemen’s Iranian-backed Houthi rebels attacked a Saudi airport, wounding 26 people.

Abe’s trip is the highest-level effort yet to de-escalate the crisis as Tehran appears poised to break the 2015 nuclear deal it struck with world powers, an accord that the Trump administration pulled out of last year. It’s also the first visit of a sitting Japanese premier in the 40 years since the Islamic Revolution.

But success may prove difficult for Abe, as the Houthi rebel attack on Saudi Arabia’s Abha regional airport underscored. The attack is just the latest in a wave of rebel drone and missile attacks targeting the kingdom, which has been mired in a yearlong war in Yemen that has killed an estimated 60,000 people and pushed the Arab world’s poorest nation to the brink of famine.

Iran is threatening to resume enriching uranium closer to weapons-grade level on July 7 if European allies fail to offer it new terms. While President Donald Trump says he wants to talk to Tehran, the U.S. has piled on sanctions that have seen Iran’s rial currency plummet along with its crucial oil exports.

The U.S. also has sent an aircraft carrier and B-52 bombers to the region, along with hundreds more troops to back up the tens of thousands already deployed across the Middle East. The U.S. blames Iran for the Houthi assaults, as well as a mysterious attack on oil tankers off the coast of the United Arab Emirates.

Abe called for “more patience” on all sides in the crisis, which he warned could spiral out of control.

“At the moment tension is rising. We should do anything we can to prevent an accidental conflict from happening and Iran should play its constructive role,” Abe said in an address to journalists after talks with Iranian President Hassan Rouhani. “There is possibility of an accidental conflict, and a military conflict should be prevented at all costs.”

Rouhani for his part iterated a warning that Iran would offer a “crushing” response if attacked by the U.S. He also claimed that Japan wanted to again buy Iranian crude oil, something it had stopped under threat of U.S. sanctions. Abe did not acknowledge expressing that in their talks.

“Whenever the economic war stops, we will see a very positive development in the region and the world,” Rouhani said.

Neither leader took questions from journalists.

Abe’s plane landed at Tehran’s Mehrabad International Airport on Wednesday afternoon where he was greeted by Iranian Foreign Minister Mohammad Javad Zarif. He immediately met Rouhani at the Sadabad Palace in northern Tehran, where soldiers on horseback bearing the Iranian and Japanese flags accompanied his car.

The Japanese premier was seen as an interlocutor for Trump. Abe had just invited the American president to Japan last month and is in the process of negotiating with him over economic issues as well.

Middle East peace is a must for Japan, which gets most of the oil fueling its economy from there. Recent threats from Iran to close off the Strait of Hormuz, the narrow mouth through which a third of all oil traded by sea passes, have raised concerns.

The looming threats to regional security could be seen just hours earlier in the attack on Abha. The Houthis said they launched a cruise missile at the Saudi airport while the kingdom said 26 people were hurt.

At least one Yemeni and one Indian national were among those injured in the attack, which al-Turki said struck the airport’s arrivals hall between 2 a.m. and 3 a.m. State media later showed pictures of damage to a roof and debris on the airport’s tarmac, though it made a point to also show live footage from the airport of passengers queuing up to catch flights.

Though there were no fatalities, it was the largest number of civilians to be wounded in Saudi Arabia as a result of an attack by the rebels since the start of the Saudi-led war in Yemen more than four years ago.

The Houthis have previously used ballistic missiles to target the Saudi capital, Riyadh, and the airport there. More recently, they have launched bomb-laden drones targeting a key oil pipeline and the southwest city of Khamis Mushait.

A Houthi spokesman, Mohammed Abdel-Salam, said Wednesday’s attack was in response to Saudi Arabia’s “continued aggression and blockade on Yemen.”

Iran’s nuclear deal, reached in 2015 by China, Russia, France, Germany, the United Kingdom and the U.S., saw Tehran agree to limit its enrichment of uranium in exchange for the lifting of crippling sanctions. Western powers feared Iran’s atomic program could allow it to build nuclear weapons, although Iran long has insisted its program was for peaceful purposes.

In withdrawing from the deal last year, Trump pointed to the accord not limiting Iran’s ballistic missile program and not addressing what American officials describe as Tehran’s malign influence across the wider Middle East. Those who struck the deal at the time described it as a building block toward further negotiations with Iran, whose Islamic government has had a tense relationship with America since the 1979 takeover of the U.S. Embassy in Tehran and subsequent hostage crisis.

Already, Iran says it quadrupled its production of low-enriched uranium. Meanwhile, U.S. sanctions have cut off opportunities for Iran to trade its excess uranium and heavy water abroad, putting Tehran on course to violate terms of the nuclear deal regardless.