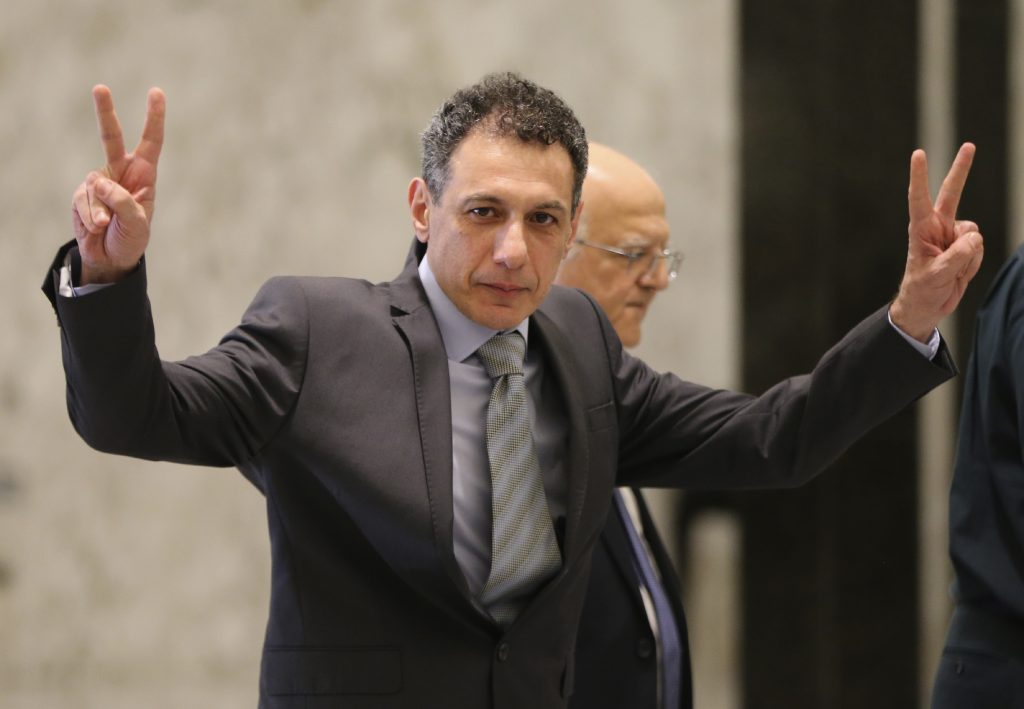 A Lebanese man with permanent U.S. residency who had been imprisoned in Iran for years on charges of espionage said Tuesday that he was subjected to “kidnapping, arbitrary detention and a show trial,” adding that his release served to de-escalate tensions between the U.S. and Iran.

In his first comments after arriving in his native Lebanon, Nizar Zakka denied reports that his release was part of a wider deal but suggested that it had helped avert further escalation in the region.

Zakka’s release comes amid heightened tensions between Iran and the U.S. after President Donald Trump withdrew the U.S. from Tehran’s nuclear deal with world powers. It comes against the backdrop of high-stakes diplomatic activity aimed at easing tensions between the two foes.

“The initiative, from beginning to end, was born in Lebanon. … But I won’t deny that this initiative had positive results on the region and appears to have stopped much of what might have happened,” Zakka told reporters shortly after arriving in Lebanon.

Zakka is one of several prisoners with either dual nationality or links to the West held in Iran. Lebanese officials have for years asked for his release, and it was not clear why Iran decided to act now.

The White House said it was “thankful” for Zakka’s release but wants to see other Americans who are detained there released as well.

“We’re thankful for the release of the individual in Iran,” press secretary Sarah Sanders said. “The big question is: there’s several others and we want to see those people released as well.” Sanders declined to say whether the U.S. government was involved in securing Zakka’s release.

Flanked by his wife and siblings, Zakka spoke at the presidential palace, his first stop after arriving on a private plane at Beirut airport. He was accompanied by the chief of Lebanon’s General Security Directorate, Maj. Gen. Abbas Ibrahim, who had traveled to the Iranian capital to bring him home.

Wearing a dark suit and tie, Zakka flashed reporters the victory sign and hugged his brother Ziad before he went into a meeting with President Michel Aoun, who had personally requested his release.

“Mr. President, my family and I owe you for the rest of my life for what you did in order for me to win my freedom,” Zakka said after the meeting. “I went there (to Iran) upon an official invitation to a country where I was kidnapped.”

Zakka, an information technology expert, was arrested in Iran in September 2015 while trying to fly out of Tehran. He had just attended a conference there at the invitation of one of the country’s vice presidents. The following year, he was sentenced to 10 years in prison after authorities accused him of being an American spy — allegations vigorously rejected by his family and associates.

Earlier on Tuesday, an Iranian judiciary official confirmed that Tehran has agreed to hand over Zakka to Lebanese officials, providing the first official confirmation of his release, which had been anticipated for days.

“A court has accepted the condition of freedom for Nizar Zakka and he will be handed over to Lebanese officials,” judiciary spokesman Gholamhossein Esmaili said, according to the judiciary’s Mizan news agency.

A report Monday on the Iranian state TV’s website mirrored an earlier one carried by the semi-official Fars news agency about Zakka.

State TV, like Fars, quoted an anonymous source saying Zakka’s forthcoming release should only be seen as a “sign of respect” for the Lebanese militant Hezbollah group and its leader, Hassan Nasrallah.

“In this regard, no negotiations have taken place at any level with any person or any government,” state TV said.

Esmaili stressed that Zakka’s release was within “the frame of the law.”

“We reviewed the (Lebanese) president’s request through the Supreme National Security Council,” Esmaili said. “Also, the Lebanese Hezbollah group considered the approval of his freedom as prudent.” The leader of the Iranian-backed Hezbollah has not made public comments about Zakka’s imprisonment, but pro-Hezbollah media have said that Nasrallah had in recent days urged the Iranians to facilitate his release.

Zakka, who lives in Washington and holds resident status in the U.S., leads the Arab ICT Organization, or IJMA3, an industry consortium from 13 countries that advocates for information technology in the region.

In 2016, The Associated Press reported that Zakka’s supporters wrote to then-Secretary of State John Kerry, stating Zakka traveled to Iran “with the knowledge and approval of the U.S. State Department, and his trip was funded by grants” from it.

Zakka’s IJMA3 organization had received at least $730,000 in contracts and grants since 2009 from both the State Department and USAID, the lead American government agency fighting poverty and promoting democracy across the world.

The State Department has yet to respond to a years-old request from the AP for information about those grants.

Shahindokht Molaverdi, an adviser to President Hassan Rouhani who as a vice president invited Zakka to Iran, told the AP in September that Iran’s government had “failed” to help Zakka.

“This is in no way approved by the government,” Molaverdi said. “We did all we could to stop this from happening, but we are seeing that we have failed to make a significant impact.”