World Hungary: Most of the Victims of Tourist Shipwreck Recovered
World 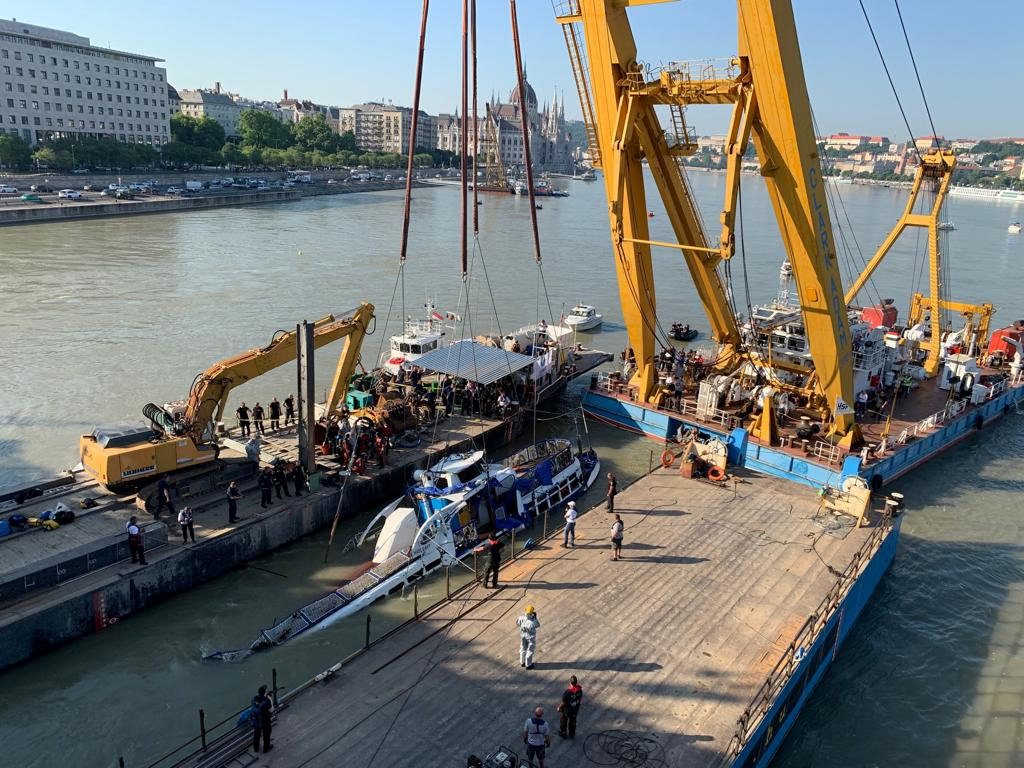 Salvage crews recovered four bodies on Tuesday as they slowly lifted the wreck of a boat two weeks after it capsized on the Danube River in Budapest with a group of South Korean tourists on board, officials said.

The Mermaid sank in seconds on May 29 after a large cruise liner hit it from behind under a bridge in the Hungarian capital during heavy rain.

Twenty-six of the tourists and the two Hungarian crew died in the worst disaster on the river in half a century. The bodies of all but four of the victims have now been recovered.

One of the bodies was spotted as the captain’s cabin came to the surface, said the spokesman for Hungary’s special forces, who are coordinating the recovery operation.

Divers had pulled straps under the sunken wreck to allow a huge floating crane to start lifting it. Each level of the boat would be searched as it surfaced and the vessel would then be hoisted onto a barge, Jasenszky added.

The captain of the cruise liner Viking Sigyn – a 64-year-old man identified by police as C. Yuriy from Odessa, Ukraine – is being held as a suspect. His lawyers said he is devastated but did nothing wrong.

The captain was held under suspicion of misconduct in waterborne traffic leading to mass casualties, police have said.

Swiss-based Viking Cruises Ltd., which owns the Viking Sigyn, has said it is cooperating with Hungarian investigators.

Roiling flood waters in the Danube made it impossible for rescuers to reach the wreck of a river boat on Friday, two days after it sank.

One rescue diver was swept away and had to be saved, divers said. The authorities said it was unsafe to reach the wreck.

Seven South Koreans were confirmed killed and seven rescued when their pleasure boat struck a cruise liner in heavy rain on Wednesday night. Another 21 people are still missing, 19 of them South Korean tourists, and officials say there is little hope any will be found alive.

Hungarian authorities arrested the captain of the cruise liner late on Thursday. His lawyers said on Friday he denied blame and regretted that he could not avert the crash.

Family members of the Koreans missing or killed began arriving in the Hungarian capital, some covering their faces as they made their way through the arrivals terminal. They were met by embassy staff and driven off in black vans.

A crane ship was docked near the wreck in preparation for recovery operations, but divers fought strong currents in the river, “conditions that preclude any approach of the hull,” the Interior Ministry said in a statement.

A diver who works at the scene and requested anonymity told Reuters they would probably have to wait for flooding to subside, at least several more days, before they can attempt to secure the site and enter the wreckage.

The current immediately swept away a diver who had submerged on Friday. A hose bringing him air had to be severed and a rescue operation had to be mounted to bring him back up.

The 440-foot (135-metre) cruise liner hit and sank the Mermaid, a smaller pleasure boat carrying Korean tourists, during a rainstorm on Wednesday evening.

South Korean Foreign Minister Kang Kyung-wha, who flew to Budapest on Friday, said the aim was to recover all the bodies.

“We strive to ensure no corpses are lost from the wreckage or the riverbed,” she said. “I hope this level of effort can be sustained.”

Swiss-based Viking Cruises, which owns the larger vessel, said in a statement on Thursday that it had cooperated fully with the authorities. It did not immediately reply to a Reuters email seeking fresh comment.

The Ukrainian captain of the cruise ship, identified by police as C. Yuriy from Odessa, denied blame, MTI news agency quoted his lawyers as saying.

He was “shaken by the consequences of the accident and regrets that he had no way to avoid the accident, and expresses his condolences to the families of the victims,” they said.

Prime Minister Viktor Orban said he too was “shaken.”

Very Good Tour, the travel agency that brought the Korean group to Budapest, told the Korea Times that it would sue once the causes of the accident were determined.

“We plan to take legal action … because it is related to compensation for our customers,” Korea Times quoted an official of the travel agency.

The search area extended to Serbia, downstream from Hungary,