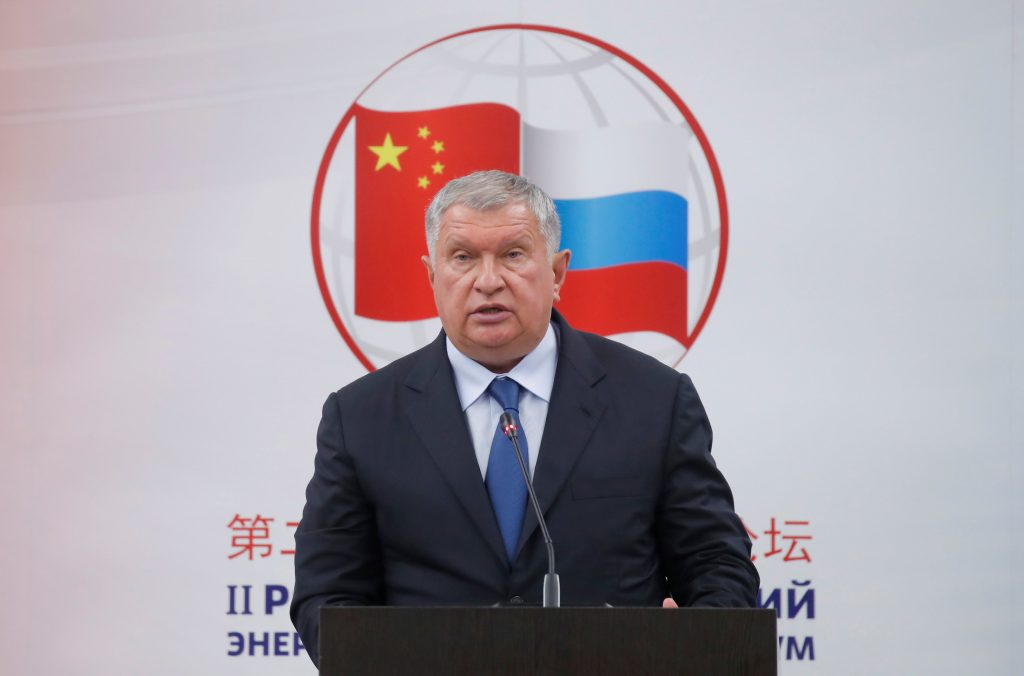 Igor Sechin, CEO of Russian oil giant Rosneft, accused the United States of using energy as a political weapon and said on Thursday that the U.S. golden age of energy had become an “era of energy colonialism” for other countries.

Speaking at an economic forum in St. Petersburg, Sechin said a third of global oil reserves were restricted by U.S. sanctions on Iran and Venezuela and that Washington was losing moral ground as a self-styled leader of open markets.

“A number of commentators like to accuse Russia of using energy as a political tool,” said Sechin, one of President Vladimir Putin’s closest allies. Rosneft produces more than 4 million barrels per day (bpd) of oil, 4% of global output.

“But indisputably the reality today is that the United States uses energy as a political weapon on a mass scale. Sanctions, or even the threat of their imposition, have a destructive effect on the global energy market ecosystem.”

In response to comments by U.S. officials last week that Washington was exporting “molecules of freedom,” Sechin said Russian and U.S. energy molecules were identical but that Russian gas was 30% cheaper than U.S. LNG (liquified natural gas).

Over the last decade the United States has enjoyed an oil and gas boom that transformed the world’s biggest oil user and importer into one of the largest exporters.

Rising energy independence has allowed Washington to impose sanctions on countries such as Venezuela and Iran for geopolitical reasons without affecting global oil prices as much as such action would have done in the past.

The United States has repeatedly accused Russia of using energy as a political weapon, particularly in gas-price disputes with Ukraine. Washington has also urged Europe to reduce purchases of Russian gas and buy from the United States instead.

Sechin said the United States wanted to ban supplies of cheap Russian gas to Europe not only to undermine Russia but to slow Europe’s economy.

“The main troublemaker today is the policies of the U.S. administration. It’s not just the countries which the U.S. describes as pariah states which are coming under fire from sanctions and trade restrictions, but also traditional U.S. partners and allies,” he said.

In Russia, Sechin said, the U.S. administration had effectively obtained control over aluminium producer Rusal via sanctions and a measure of control over platinum and palladium markets and their producer Norilsk Nickel , co-owned by Rusal.

“Oppression of competitors has become the dominant theme of U.S. economic and foreign policy,” said Sechin, predicting that the part of global oil output subject to sanctions would rise this year to 2.5 million bpd from 1.5 million last year.

He said he believed China would not make concessions on major issues in its trade dispute with Washington and predicted a further escalation, including a reduction of Chinese exports of rare earth metals to the United States.

A further increase in U.S. output might require “a new sanctions victim,” said Sechin, adding that U.S. oil exports would triple to 9 million bpd by 2024, overtaking Saudi and Russian supplies.