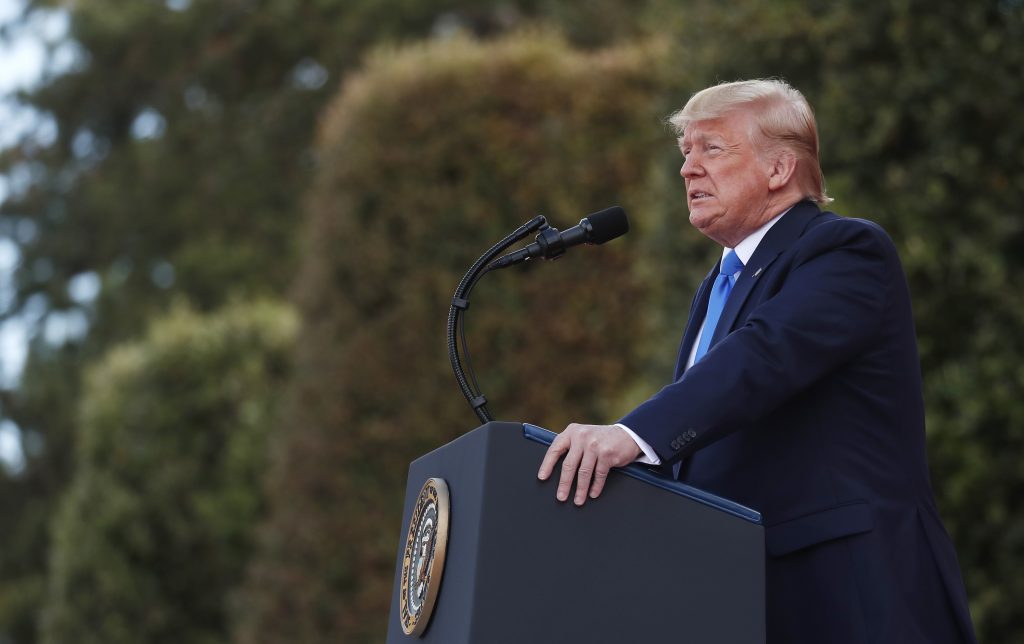 We are gathered here on freedom’s altar, on these shores, on these bluffs, on this day 75 years ago, 10,000 men shed their blood, and thousands sacrificed their lives for their brothers, for their countries, and for the survival of liberty.

Today we remember those who fell and we honor all who fought right here in Normandy. They wouldn’t back this ground for civilization. To more than one 170 Veterans of the Second World War, who join us today, you are among the very greatest Americans who will ever live. You are the pride of our nation. You are the glory of our republic. And we thank you from the bottom of our hearts.

Here with you are over 60 veterans who landed on D-Day. Our debt to you is everlasting. Today we express our undying gratitude. When you were young, these men enlisted their lives in a great crusade – one of the greatest of all times. Their mission is the story of an epic battle and a ferocious eternal struggle between good and evil. On the 6th of June, 1944, they joined a liberation force of awesome power and breathtaking scale.

After months of planning, the Allies had chosen this ancient coastline to mount their campaign to vanquish the wicked tyranny of the Nazi empire from the face of the earth.

The battle began in the skies above us. In those first tense midnight hours, 1,000 aircraft roared overhead, with 17,000 allied airborne troops preparing to leap into the dark just beyond these trees. Then came dawn. The enemy who had occupied these heights saw the largest naval armada in the history of the world.

Just a few miles offshore, were 7,000 vessels bearing 130,000 warriors. They were the citizens of free and independent nations united by their duty to their compatriots, and to millions yet unborn.

There were the British, whose nobility and fortitude saw them through the worst of Dunkirk and the London Blitz. The full violence of Nazi fury was no match for the full grandeur of British pride. Thank you.

There were the Canadians, whose robust sense of honor and loyalty compelled them to take up arms alongside Britain from the very, very beginning.

There were the fighting Poles, the tough Norwegians, and the Intrepid Aussies. There were the gallant French commandos soon to be met by thousands of their brave countrymen ready to write a new chapter in the long history of French valor.

And finally, there were the Americans.

They came from the farms of a vast heartland, the streets of glowing cities in the forges of mighty industrial towns. Before the war, many had never ventured beyond their own community. Now they had come to offer their lives half a world from home.

This beach, codenamed Omaha, was defended by the Nazis with monstrous firepower, thousands and thousands of mines and spikes driven into the sands so deeply. It was here that tens of thousands of the Americans came. The G.I’s who boarded the landing craft that morning knew that they carried on their shoulders not just the pack of a soldier, but the fate of the world.

Colonel George Taylor, whose 16th infantry regiment would join in the first wave, was asked what would happen if the Germans stopped them, right then and there, cold on the beach, just stopped them. What would happen? This great American replied, “Why the 18th Infantry is coming in right behind us, the 26th infantry will come on too. Then there is the 2nd Infantry Division, already afloat, and the 9th Division and the 2nd Armored and the 3rd Armored, and all the rest. Maybe the 16th won’t make it. But someone will”.

One of those men, in Taylor’s 16th regiment, was Army medic Ray Lambert. Ray was only 23 but he had already earned three Purple Hearts and two Silver Stars fighting in North Africa and Sicily.

Where he and his brother Bill, no longer with us, served side by side. In the early morning hours, the two brothers stood together on the deck of the USS Henrico, before boarding two separate Higgins landing craft.

“If I don’t make it,” Bill said, “please, please take care of my family”. Ray asked his brother to do the same.

Of the 31 men on Ray’s landing craft, only Ray and six others made it to the beach. There were only a few of them left. They came to the sector right here below us. Easy Red it was called. Again and again, Ray ran back into the water. He dragged out one man after another. He was shot through the arm, his leg was ripped open by shrapnel, his back was broken, he nearly drowned, he had been on the beach for hours bleeding and saving lives. When he finally lost consciousness, he woke up the next day on a cot, beside another badly wounded soldier. He looked over, and saw his brother Bill. They made it. They made it. They made it. At 98-years-old, Ray is here with us today, with his fourth Purple Heart and his third Silver Star. From Omaha, Ray, the free world salutes you. Thank you Ray.

Nearly two hours in, unrelenting fire from these bluffs kept the Americans pinned down on the sand, now red, with our heroes’ blood.

Then, just a few hundred yards from where I’m standing, a breakthrough came. The battle turned, and with it, history.

Down on the beach. Captain Joe Dawson, the son of a Texas preacher, led Company G through a minefield to a natural fold, in the hillside still here.

Just beyond this path to my right. Captain Dawson snuck beneath an enemy machine gun perch, and tossed his grenades. Soon, American troops were charging up “Dawson’s draw”. What a job he did. What bravery he showed. Lieutenant Spaulding and the men from Company E moved on to crush the enemy strong point on the far side of this cemetery and stop the slaughter on the beach below.

Countless more Americans poured out across this ground all over the countryside. They joined fellow American warriors from Utah Beach, and allies from Juneau, soared in Gold, along with the airborne and the French patriots.

By the fourth week of August, Paris was liberated.

Some who landed here pushed all the way to the center of Germany. Some threw open the gates of Nazi concentration camps to liberate Jews who had suffered the bottomless horrors of the Holocaust.

And some warriors fell on other fields of battle returning to rest on this soil for eternity.

Before this place was consecrated to history, the land was owned by a French farmer, a member of the French Resistance. These were great people. These were strong and tough people. His terrified wife waited out D-Day in a nearby house holding tight to their little baby girl.

The next day a soldier appeared. “I’m an American,” he said. “I’m here to help”. The French woman was overcome with emotion and cried. Days later, she laid flowers on fresh American graves. Today her granddaughter Stephanie serves as a guide at this cemetery. This week. Stephanie led 92-year-old Marion Wynn of California to see the grave of her brother Don for the very first time. Marion and Stephanie are both with us today. And we thank you for keeping alive the memories of our precious heroes. Thank you.

9,388 young Americans rest beneath the white crosses and Stars of David, laid on these beautiful grounds. Each one has been adopted by a French family that thinks of him as their own. They come from all over France to look after our boys. They kneel, they cry, they pray, they place flowers and they never forget. Today, America embraces the French people and thanks you for honoring our beloved dead. Thank you.

To all of our friends and partners, our cherished alliance was forged in the heat of battle, tested in the trials of war, and proven in the blessings of peace. Our bond is unbreakable.

From across the Earth, Americans are drawn to this place as though it were a part of our very soul. We come not only because of what they did here, we come because of who they were. They were young men with their entire lives before them. They were husbands who said goodbye to their young brides and took their duty as their fate. They were fathers who would never meet their infant sons and daughters because they had a job to do, and with G-d as their witness, they were going to get it done.

They battled, not for control and domination, but for liberty, democracy, and self-rule. They pressed on for love and home and country, the main streets, the schoolyards, the churches and neighbors and families and communities that gave us men such as these. They were sustained by the confidence that America can do anything, because we are a noble nation, with a virtuous people, praying to a righteous God. The exceptional might came from a truly exceptional spirit. The abundance of courage came from an abundance of faith.

The great deeds of an army came from the great depths of their love as they confronted their fate, the Americans and the Allies placed themselves into the palm of G-d’s hand. The men behind will tell you that they are just the lucky ones, as one of them recently put it, “all the heroes are buried here”. But we know what these men did, we knew how brave they were, they came here and saved freedom, and then they went home and showed us all what freedom is all about.

The American sons and daughters who saw us to victory were no less extraordinary in peace. They built families, they built industries, they built a national culture that inspired the entire world in the decades that followed, America defeated Communism, secured Civil Rights, revolutionized science, launched a man to the Moon and then kept on pushing to new frontiers – and today America is stronger than ever before.

Seven decades ago, the warriors of D-Day fought a sinister enemy who spoke a 1,000-year empire. In defeating that evil, they left a legacy that will last, not only for 1,000 years, but for all time. For as long as the soul knows for duty and for honor, for as long as freedom keeps its hold on the human heart.

To the men who sit behind me and to the boys who rest in the field before, your example will never, ever grow old. Your legend will never die, your spirit, brave, unyielding and true, will never die. The blood that they spilled, the tears that they shed, the lives that they gave, the sacrifice that they made, did not just win a battle. It did not just win a war. Those who fought here won a future for our nation. They won the survival of our civilization, and they showed us the way to love, cherish and defend our way of life for many centuries to come.