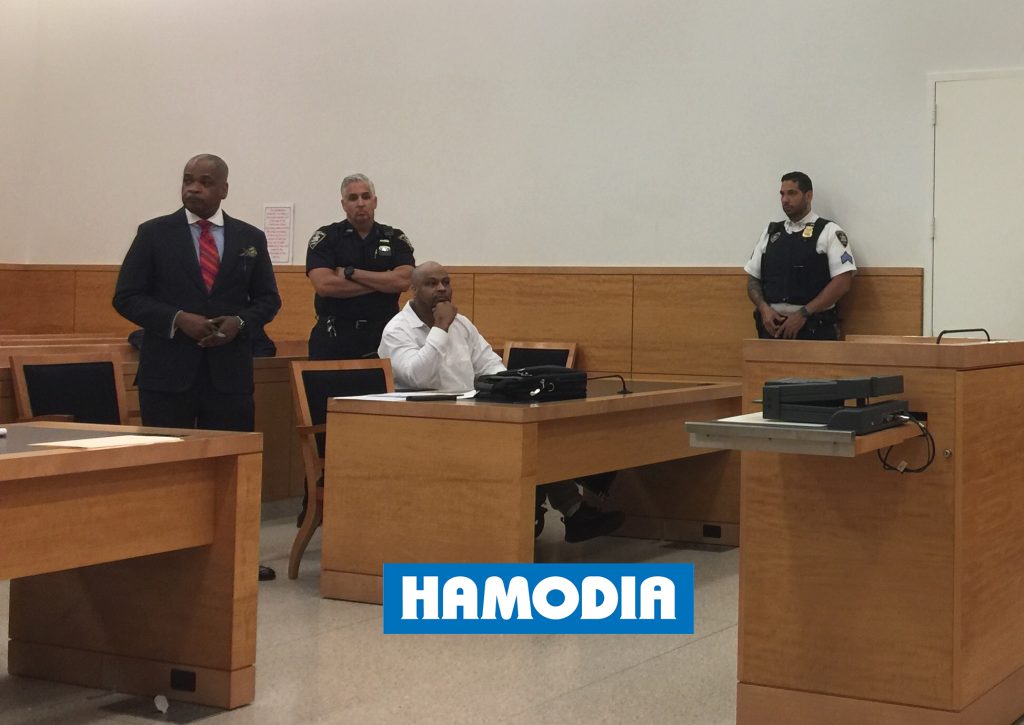 Erskin Felix, convicted of the murder and kidnapping of Menachem Stark, was sentenced Thursday to 24 years to life in prison. Five years and five months after Stark’s death, all four men accused of involvement in the crime have now been convicted or pleaded guilty, and sentenced.

In a victim impact statement prior to the sentencing, Mrs. Bashie Stark described the pain her family has experienced since her husband’s death.

“It was Erskin Felix who planned and executed this cruel attack, and it is he who’s responsible for the trauma that my family is suffering to this day and will suffer for the rest of our lives,” said Mrs. Stark, who remained composed throughout the statement. “With the murder of this sweet and gentle man, my loss is huge and my children, too, are going through life missing that love and security that their devoted father had always provided.”

“Menachem and I always imagined growing old together and watching our children reach adulthood. But in the years that have passed, two of my children got married and Menachem wasn’t there with us. Two grandchildren were born, and Menachem never got to meet them. To hold them. To bounce them on his knee. They will never know his love. My little ones barely remember their father, the man that loved them more than life itself.”

Stark was kidnapped by two men on the night of January 2, 2014, outside his Williamsburg office, and forced into the men’s minivan, in a scene captured on surveillance footage. His body was found in Long Island the next day.

A jury deliberated for less than five hours before convicting Felix, 40, in April, of second-degree murder, first degree kidnapping and tampering with physical evidence. He was acquitted of another first-degree kidnapping charge and a conspiracy charge.

Felix is believed to have masterminded a plan to kidnap Stark and hold him for ransom, claiming Stark owed him money. Felix managed construction sites on properties owned by Stark, a real-estate developer. Stark was friendly with Felix, according to testimony by Mrs. Stark, and had also hired Felix to do contracting work on his home some years earlier.

According to testimony by Erskin’s cousin Kendel Felix, Erskin and Kendel carried out the kidnapping, then drove to the home of Erskin’s brother Kendall Felix and picked him up, and then picked up another cousin, Irvine Henry. The plan went awry when the group suddenly realized that Menachem was no longer breathing; Erskin had unintentionally suffocated Menachem, who was already bound and gagged, when he had kneeled on Menachem’s chest.

The group then returned to the area of Menachem’s office, and Erskin and Irvine left the vehicle and began walking toward the office, likely to retrieve a tracking device Erskin had placed under Menachem’s vehicle weeks earlier. But then, fearing being seen, they decided to go home instead. Meanwhile, Kendall and Kendel drove the minivan with Menachem’s body to Long Island, where they put him in a dumpster and burned him.

Kendel was convicted in September 2016 of felony murder and kidnapping. The other three were arrested shortly thereafter, and Kendel then reached a deal to cooperate with prosecutors and provide testimony for a reduced sentence.

Kendall accepted an offer from Brooklyn Supreme Court Justice Danny Chun in March to plead guilty to second-degree conspiracy and first-degree hindering prosecution, and was sentenced to 2-1/3 to seven years in prison. With the time he has already served since his arrest, Kendall will be eligible for parole sometime this month.

Irvine Henry pleaded guilty to hindering prosecution and attempted tampering with physical evidence. In exchange for his testimony against Erskin, prosecutors agreed to drop the hindering charge, and he was sentenced in May to the three months he had sat in jail before posting bail.

Erskin, who had faced a minimum of 15 years to life and a maximum of 25 to life, declined to speak at the sentencing Thursday.

Though Erskin did not kill Menachem intentionally, Dean argued that “looking at the violent nature of … the plan that he put into motion, that he executed and brought all these family members into,” it was anyway “very likely” that Menachem “would die from these acts that were undertaken by Mr. Felix.” As Erskin had masterminded the scheme, said Dean, he “is responsible for everything that happened in this case.”

Moreover, said Dean, Erskin – who maintains his innocence – is the only one involved in the crime “who has not taken any responsibility.”

Defense attorney Mark Henry Pollard said his client maintains his innocence, and asked Chun to sentence Erskin to the minimum of 15 years to life, arguing that he had “led a spotless life before getting arrested on this case” and was considered a role model, even by prosecution witnesses; that he had gone to college and started a business, personifying “the American dream.” Pollard also asked the judge to take into consideration that the death his client was convicted of was not committed intentionally, and that a prison stay is more difficult for Erskin due to his leukemia.

Erskin has recently had a recurrence of cancer that he’d had years ago, and broke his leg due to weakness from chemotherapy treatments. A bald Erskin entered court in a wheelchair Thursday.

In imposing sentence, Chun said he was “dumbfounded to hear that the defendant maintains his innocence, because as far as criminal trials go, the evidence in this case was absolutely overwhelming.” Chun sentenced Erskin to 24 years to life for each of the murder and kidnapping charges, and 1-1/3 to 4 years for the tampering charge, all to run concurrently. Chun gave just below the maximum sentence of 25 to life, in consideration of the murder having been committed unintentionally.

In a statement following the sentencing, Brooklyn District Attorney Eric Gonzalez said, “This defendant orchestrated the callous kidnapping that led to the murder of Menachem Stark, a husband, father and beloved member of the Williamsburg community. With today’s substantial prison sentence this defendant has now been brought to justice and held accountable for his role in this senseless loss of life.”

In comments to reporters, Menachem’s family expressed satisfaction with the sentence.

“This man deserves never to leave prison, to be locked away for life,” said Mrs. Stark.

“Unfortunately nothing can bring Menachem back, but we’re happy to have closure,” said Mrs. Sima Bernat, Menachem’s mother-in-law.

“Menachem was the kind of man that you met and couldn’t help but love because he was genuinely sweet and he liked people,” said Menachem’s sister-in-law, Tziri Hershkovitz. “Goodness gracious, he liked his murderer before the guy killed him.

“He liked everyone. That’s who he was.”