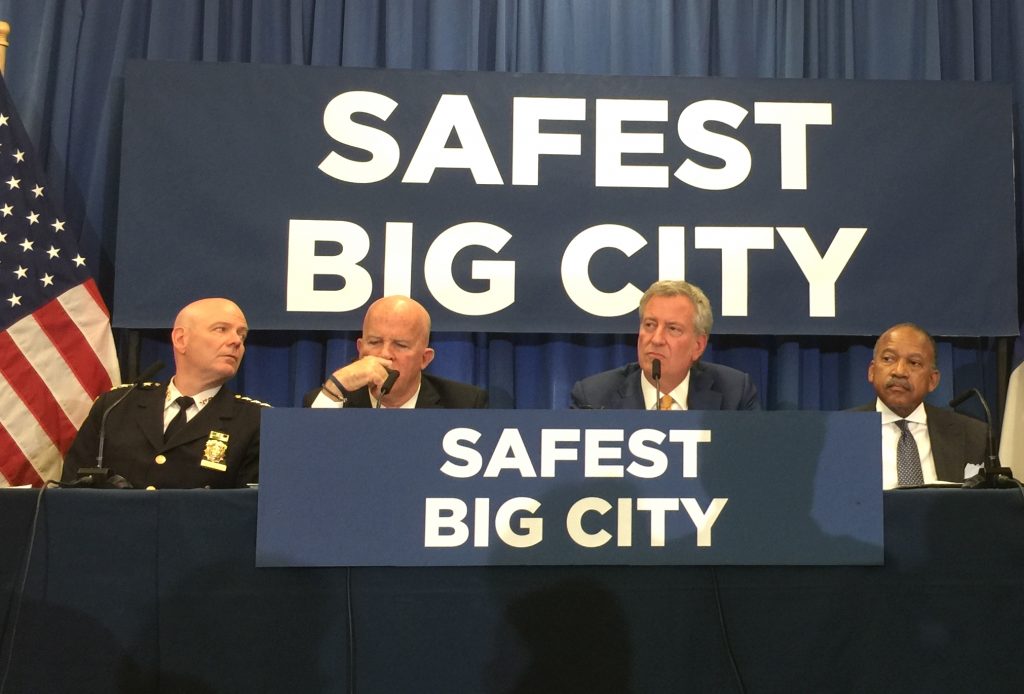 The comments came at a press conference de Blasio held with NYPD officials in Brooklyn on Tuesday to discuss crime statistics, which show a marked increase in hate crimes, particularly against Jews, even as overall crime has gone down. A large number of the violent assaults on Jews have occurred in the Brooklyn neighborhoods of Crown Heights and Williamsburg.

When the subject about whether the political climate has contributed to the uptick in hate crimes arose, the mayor said that he wants to “differentiate this city from the rest of the United States of America,” in that the hate crimes in New York City do not seem to be ideologically motivated. But across the country, he said, “I want to remind people that particularly these white supremacist forces … We didn’t see those kinds of organizations out in the open as much as we’re seeing now.”

“That is happening nationally, I don’t have a question in my mind. I think here … it’s a different reality in some ways, but that national backdrop sure doesn’t help, and I think it’s put everyone on edge and it’s created a lot of division.”

Later in the press conference, this reporter asked de Blasio, “You said, although in New York it doesn’t seem to be so much ideologically based … there is a rise in white supremacy in America. [But] Is it not true that ideologically there is also a rise on the left in the BDS movement – and around the world. I know that, for example, in Europe, people are talking about these right-wing marches, but the actual crimes against Jews in countries like France is really being committed by Muslims?”

De Blasio replied: “I would caution, I think it’s much more complex than that. And I think the ideological movement that is anti-Semitic is the right-wing movement. That’s just abundantly – it’s been clear down the history. And I think we could all agree, I think we can put the Nazis and the fascists on the right side of the spectrum, and they are the ultimate, unfortunately in this world history.”

De Blasio went on to discuss the connection between the Nazis and contemporary far-right movements.

“After World War II, a huge number of the former Nazis and former fascists were allowed to reintegrate into society,” said the mayor. “Right-wing parties developed even in the 50s and 60s in the same countries that had experienced fascism and Nazism. They have continued to grow. So, I want to be very, very clear – the violent threat, the threat that is ideological is very much from the right. And that’s something I want progressives to focus on in particular. It’s part of how I make the case that you need to be on the side of Israel, because you have to understand where all this is leading us.”

Earlier in the press conference, when asked about BDS and Israel – not in regard to hate crimes, but in the context of his party and presidential campaign – the mayor had taken a strong pro-Israel, anti-BDS stance.

When this reporter asked about de Blasio, unlike many other progressives, being a supporter of Israel and opponent of BDS, the mayor said, “I absolutely believe the State of Israel is as necessary, or more necessary than it’s been in its history. And I keep coming back to – there is a global rise in anti-Semitism that’s very troubling and very dangerous directly related to the right-wing movements, directly related to white supremacy. The pieces are coming together and the dots are connecting in a very troubling manner. So, to have a place that is a refuge for the Jewish people is absolutely necessary. I believe 100 percent in protecting the State of Israel and I believe that the BDS movement – very misguided – is undermining the economy and the existence and the survival of the State of Israel.”