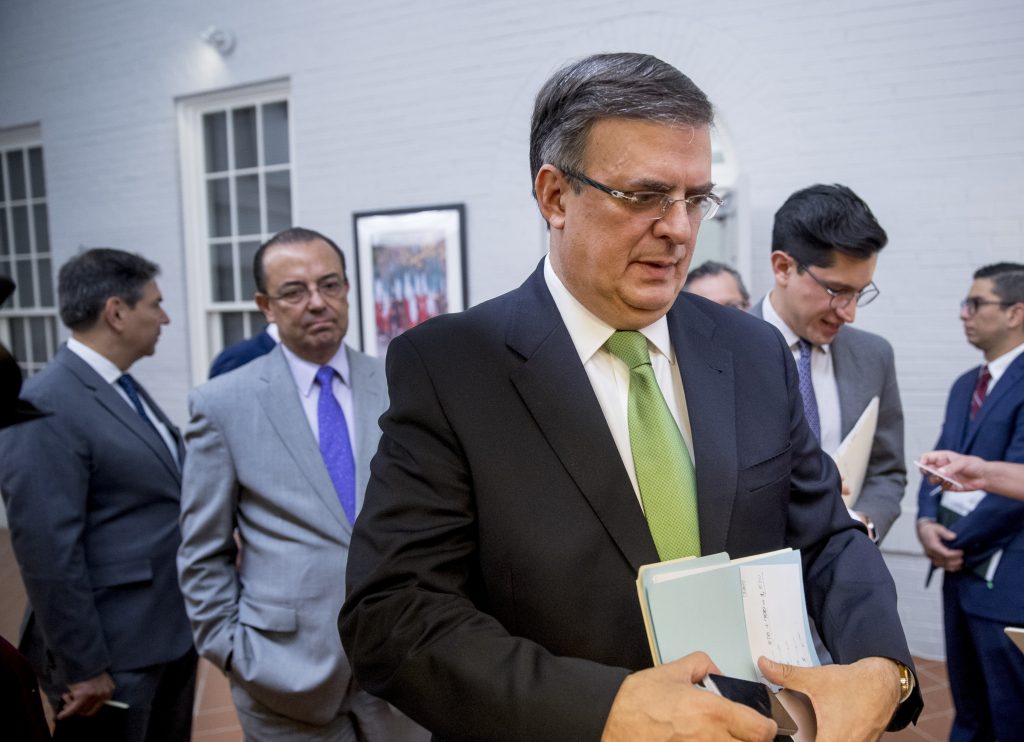 White House officials downplayed expectations ahead of the high-level, face-to-face meeting Wednesday between the U.S. and Mexico over President Donald Trump’s threatened tariffs on Mexican goods flowing into the United States.

The first tariffs — 5% taxes on imports from Mexico — are to go into effect on Monday, barring an agreement that seems increasingly unlikely before then, despite continuing negotiations as well as stiff opposition from many of Trump’s fellow Republicans in Congress.

The U.S. delegation to Wednesday’s talks, led by Vice President Mike Pence, was ready to listen to Mexico’s ideas for meeting Trump’s demands that the country step up its efforts to halt Central American migrants from making their way to the U.S. border, according to two officials, who spoke only on condition of anonymity ahead of the private meeting at the White House.

But they said they did not expect a deal to emerge that would stop the tariffs.

The tariffs carry enormous economic consequences for both countries, and politically they underscore a major ideological split between Trump and his party. Trump has increasingly relied on tariffs as a bludgeon to try to force other nations to bend to his will, dismissing warnings, including from fellow Republicans, about the likely impacts on American manufacturers and consumers.

While some have suggested that the president, who is currently traveling in Europe, is not serious about going through with his threat, he insisted in a tweet Tuesday that he was not “bluffing” and told reporters the tariffs were “more likely” than not to take effect. He said Wednesday in Ireland that he believes Mexico wants to make a deal.

Trump is dead-set on forcing Mexico to make major changes and expects the visiting delegation to present a tangible plan with concrete deliverables, according to one of the White House officials.

But the U.S. has not proposed any concrete benchmarks or metrics to assess whether the U.S. ally is sufficiently stemming the migrant flow from Central America. And it is unclear what more Mexico can do or what would be enough to satisfy Trump on illegal immigration, a signature issue of his presidency and one that he sees as crucial to his 2020 re-election campaign.

Tony Wayne, a former U.S. ambassador to Mexico, said the two sides could have a good meeting and come to an agreement on how to move forward.

“But the wild card is, will that be good enough for the guy who started all this or is he going to want to put these tariffs in place to show that he’s serious,” Wayne said.

The economic stakes are enormous. Two-way trade between the United States and Mexico came to $678 billion last year. The 25-year-old North American Free Trade Agreement made trade with Mexico largely duty free. As a result, manufacturers have built up complicated supply chains that straddle the border. Americans bought $378 billion worth of Mexican imports last year, led by cars and auto parts. Mexico is America’s No. 2 export market behind Canada.

Trump pressured Mexico and Canada to agree to a rewrite of NAFTA last year. The revamped version — the U.S.–Mexico–Canada Agreement — has been signed by all three countries but must be approved by their legislatures. Tariffs could threaten the prospects.