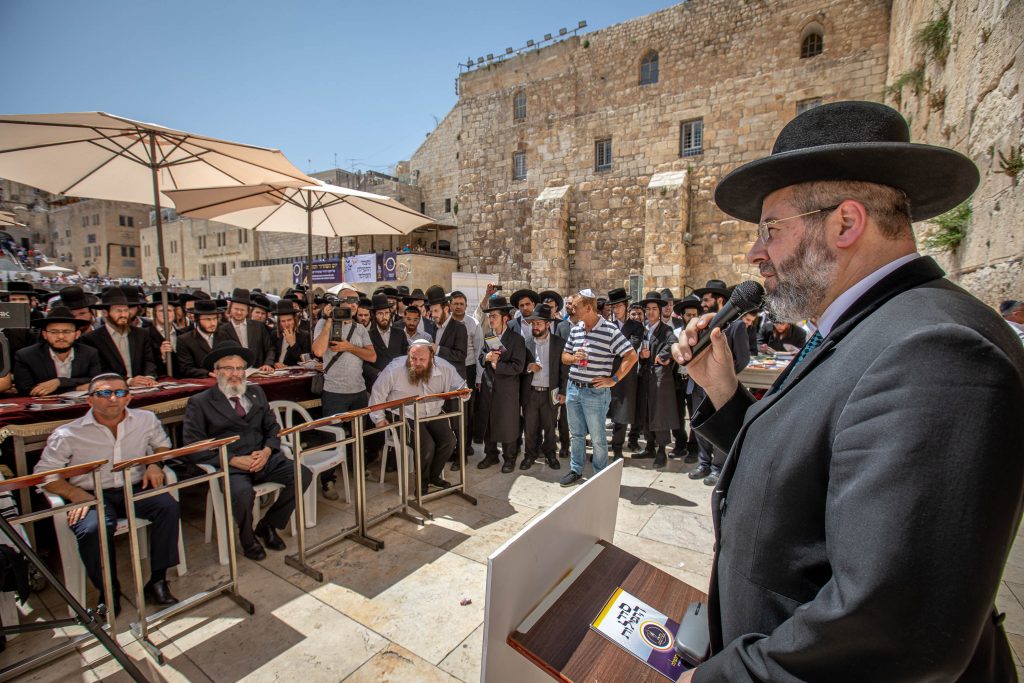 The Day of Liberation and Rescue, marking the liberation of European Jewry from the hands of the Nazis, is marked each year on 26 Iyar. This year, it marked 74 years from the final rescue of the survivors and was devoted to the memory of the victims of the Holocaust for the sixth time in Israel and abroad.

As usual, the Day of Liberation and Rescue opened with a prayer rally at the Kosel headed by Ashkenazi Chief Rabbi David Lau, who gave a moving address. Hundreds attended the ceremony, among them students from Ukraine, Russia, Kazakhstan and Caucasus who are currently studying in the Russian-language track in Machon Meir, which is headed by Rabbi Eliyahu Brazhensky.

The rally began with an opening address by Rabbi David Lau, who praised and thanked Hashem for all the good He has bestowed upon the Jewish nation. He noted how, after the terrible darkness of the Holocaust and loss of so many millions of our nation’s members, Hashem had not forsaken us and the Jewish nation once again recovered, creating a world of Torah that is spread both in Israel and abroad in a quantity and quality that is completely unprecedented in all of Jewish history. “We continue to pray,” he concluded, “that just as Hashem has saved us until now, He will allow us to celebrate the coming Shavuos from atop the Har HaBayis, with the coming of Moshiach.”

Hundreds joined the prayer rally in the Grand Synagogue in Moscow, as well. The guest of honor from Israel, the Rishon LeTzion and Chief Sephardic Rabbi of Yerushalayim Harav Shlomo Moshe Amar, gave a moving address on the mixed feelings of the occasion, where, “on the one hand, we lost a third of our nation in the hands of the Nazi murderers … yet on the other hand we must also remember the miracle of our survival and thank and praise Hashem for the survivors. This is also an opportunity to thank President Putin on behalf of the Jewish nation for his kind gestures and warm heart toward the Jewish nation, the Jewish community in Russia and in Israel, and especially for his recent special assistance in bringing Jewish soldier Zecharya Baumel’s body to Jewish burial,” he said.

This initiative to mark the Day of Liberation and Rescue is led by philanthropist German Zakharyayev, vice president of the Russian Jewish Congress, who devotes much of his time and energy to mark and commemorate the rescue of the remaining European Jews from the horrific Holocaust.

“Baruch Hashem, this important idea is annually implemented in a constantly growing number of Jewish communities worldwide, and I will continue doing everything in my power to disseminate our obligation to thank and praise Hashem ’s Name and to remember His messengers … with tefillah, tzedakah, writing sifrei Torah and studying Mishnayos, in accordance with our tradition from generations past.”

It should be noted that the initiative has garnered the blessings of Gedolei Yisrael. As part of the initiative, a hachnasas sefer Torah was celebrated with Mr. Zakharyayev, leading to the Kosel and to the home of the Hagaon Harav Chaim Kanievsky, shlita, concluded by a siyum of six million Mishnayos studied by the children participating in the Anachnu V’Tze’etza’enu program in Bnei Brak.

President of Russia Vladimir Putin sent a congratulatory message to Mr. Zakharyayev, the leaders of the community, and war veterans who had fought against the Nazis, in which he praised Mr. Zakharyayev’s initiative to commemorate the holy martyrs, among them soldiers of the Red Army “who wrote chapters of remarkable heroism in the fateful campaign” and “their tremendous contribution to freeing the Jews from the death camps and rescuing them from annihilation.”