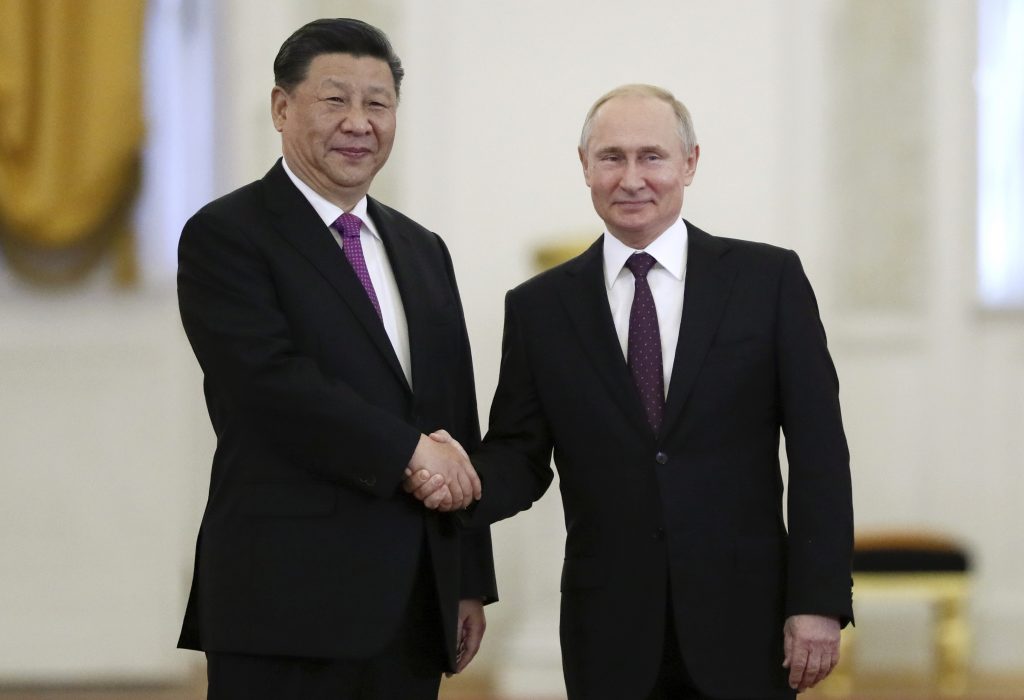 Xi called Putin his “close friend,” noting that they have met nearly 30 times over the last six years. The trip marked Xi’s eighth visit to Russia since he took the helm in 2012.

“We will strengthen our mutual support on key issues,” Xi said, sitting next to Putin in an ornate Kremlin hall.

Relations between Russia and China have become increasingly close as they both face mounting tensions with the U.S.

Moscow’s ties with Washington have declined sharply over the Ukrainian crisis, the war in Syria and the allegations of Kremlin meddling in the U.S. 2016 presidential elections, while China is engaged in a spiraling trade war with the U.S.

“Protectionism and unilateral approaches are on the rise, and a policy of force and hegemonism is increasingly taking hold,” Xi said.

Putin and Xi were meeting in Moscow as world leaders gathered on the south coast of England to mark the 75th anniversary of the D-Day landings.

Putin, who attended 70th anniversary commemorations in France five years ago, has not been invited. Russia was not involved in D-Day, but the Soviet effort was crucial in defeating the Nazis on the Eastern Front.

The Russian leader emphasized that Moscow and Beijing have the same view on many global issues, particularly noting their shared opposition to Washington’s withdrawal from the Intermediate Range Nuclear Forces (INF) Treaty, a key Cold War-era arms control pact.

In a joint statement issued after the talks, Putin and Xi criticized the U.S. move, saying it will “undermine strategic stability.”

They also voiced worry about the growing threat of an arms race in space, calling for a global ban on deployment of weapons in orbit.

The two presidents underlined their shared approach to international crises, emphasizing the need to preserve a nuclear deal with Iran and promising to help advance the stalled talks on North Korea’s denuclearization.

Also on Wednesday, Xi and Putin will mark the launch of a Chinese car factory south of Moscow and visit Moscow’s zoo, to which China has presented a pair of pandas. With a smile, Putin said that “we highly appreciate that friendly gesture.”

Later this week, Xi will be the most prominent guest at Russia’s major investment conference in St. Petersburg on Friday.