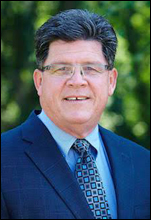 An incumbent Republican assemblyman who lost his party’s support fell in his primary Tuesday in southern New Jersey’s 8th District, while incumbents elsewhere easily won nomination to run in the fall election.

ran under a MAGA or Make America Great Again banner — embracing Donald Trump so steadfastly that he put a photo of the president on his social-media page. But it wasn’t enough to defeat the party establishment’s favored ballot position.

Howarth has been in the Assembly since 2016. The intra-GOP feud goes back to earlier this year.

The state GOP says that around the time that Howarth’s running mate state Sen. Dawn Marie Addiego switched parties from Republican to Democratic in January, he considered changing as well. He has denied it, but the county party establishment dropped him, which meant he was not in a favored ballot position.

Howarth then embraced Trump wholeheartedly, and the state GOP took the rare step of weighing in during the campaign to criticize Howarth.

“Howarth’s failed attempt to defraud South Jersey voters into thinking he was anything other than a Republican turncoat wasn’t enough to overcome the good work and reputations of Ryan Peters and Jean Stanfield,” Steinhardt said in a statement on Tuesday.

“We must embrace President Trump’s message to start winning again, and I intend to bring that message to the voters this Tuesday,” Howarth said.

His fellow incumbent Anthony Bucco won re-nomination, as did West Point graduate and Army veteran Brian Bergen, of Denville. The district is traditionally a Republican stronghold.

There were contested races in just under half of the state’s 40 districts. Each district elects two members to the Assembly, where they serve for two years.