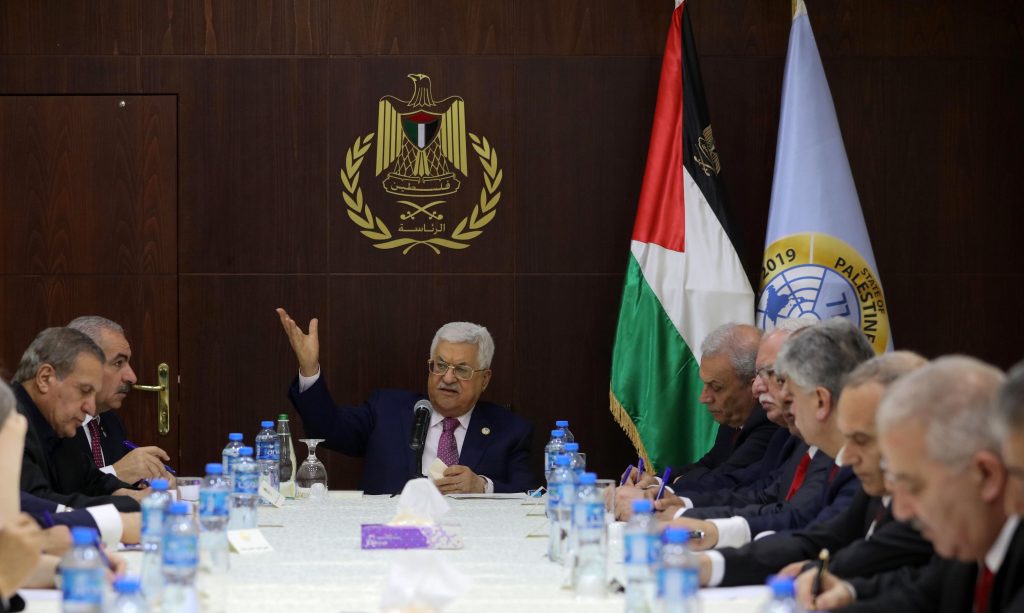 The Palestinian labor market was limping along in 2017, with unemployment stubbornly high and economic growth slowing. But that didn’t stop the Palestinian Cabinet from secretly giving itself a series of lavish payouts and perks, highlighted by a 67 percent salary hike.

The payments and perks were kept quiet for the past two years, but news of the Cabinet decision leaked this week in a series of documents posted anonymously to social media.

The revelations have rocked the Palestinian Authority, where the cash-strapped government has been forced to slash the salaries of its employees because of a financial crisis. Coming during the Islamic month of Ramadan, a time of high expenses for struggling families, the report renewed outrage among Palestinians who have long seen their leadership as out of touch and rife with corruption.

“The cabinet members behaved as if the government is their private shop and they can take as much as they want without being held accountable,” said political commentator Ehab Jareri.

According to one leaked document, the monthly salaries for Cabinet ministers spiked from $3,000 to $5,000, while the prime minister’s salary was raised to $6,000.

The raises were kept secret from the public and approved by PA President Mahmoud Abbas, two senior officials said, overriding a 2004 law that fixed ministers’ salaries. The officials spoke on condition of anonymity because they were not authorized to discuss the issue with the media.

The pay raise was made retroactive to 2014, when the Cabinet took office, giving the ministers an extra bonus of tens of thousands of dollars, the officials said.

The benefits did not end there. Ministers who live outside Ramallah, the seat of the Palestinian Authority, received $10,000 a year to rent a house there, another document showed. Officials who already owned Ramallah homes also reaped the lucrative bonus. And in an extra boost, the government inflated the exchange rate, giving them a roughly 17 percent premium when converting the salaries to Israeli shekels. Cabinet members already enjoy government compensation for personal drivers and international travel expenses.

The documents were viewed by The Associated Press and authenticated by the Palestinian officials.

After years in office, Abbas has seen his popularity plummet. People are disillusioned by his failure to deliver an independent state, his loss of the Gaza Strip to the rival Hamas movement and general economic malaise. Unemployment in the area is near 20 percent, and a typical salary for those who do work, such as civil servants, is roughly $700 to $1,000 a month.

The leaked documents have sparked widespread outrage on Palestinian social media, with critics branding the government a “farm” or “shop” for top officials. Amid the outrage, the Palestinian Authority has been forced to respond.

Newly appointed Prime Minister Mohammad Shtayyeh, a longtime adviser to Abbas, has suspended the pay raises and referred the issue to Abbas “to review it and take legal measures.” While the issue is investigated, ministers will receive half their salaries, like most other government employees, according to government spokesman Ibrahim Milhim.

Former Prime Minister Rami Hamdallah, whose technocratic government enacted the benefits, defended them, saying in a statement: “Cabinet ministers requested the raise in 2017 from President Abbas, who approved it while taking into consideration the rising costs of living.”

The leaked documents offer a rare glimpse inside the workings of the corruption-plagued Palestinian government, igniting conversations about what else the government might be hiding.

“I think this is just the tip of the iceberg of corruption in the Palestinian Authority, considering that we couldn’t have access to more important information,” said Majdi Abu Zeid, a researcher at the anti-corruption watchdog group Aman.

The leaks coincide with a report by Aman finding that the government has improperly filled senior government jobs without advertising them, appointed officials’ relatives to senior posts and refused to disclose budgets of the presidential office and security forces.

The litany of leaked findings has deepened public disillusionment. Opinion surveys conducted by the prominent Palestinian pollster Khalil Shikaki reveal that over 80 percent of Palestinians consider their leadership corrupt.

“The Palestinian Authority lost the trust of people a long time ago because of its unlawful practices,” said analyst Jihad Harb. After the latest leaks, he added, the government looks “very vulnerable and shaken.”