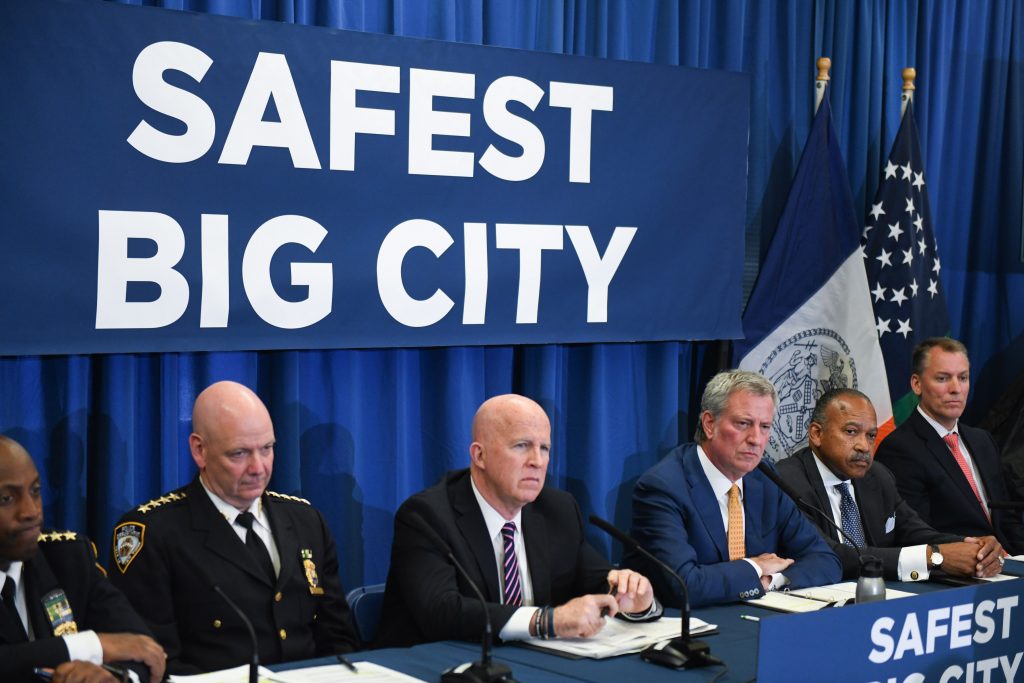 By contrast, the city saw reductions in every major index crime category from 2018 to 2019, both in the year-to-date and month of May. Last month also saw the lowest number of murders and shooting incidents of any May in the CompStat era.

As the city seeks to tackle hate crime, Mayor Bill de Blasio announced Tuesday that the Office for the Prevention of Hate Crimes, a new division of the Mayor’s Office of Criminal Justice created by the City Council and mandated to open by November, will roll out this summer, ahead of schedule. OPHC will coordinate responses to hate crimes across city agencies, developing prevention strategies to address biases fueling hate crimes, and assist hate-crime victims.

Of the personal crimes, there has been a particularly marked wave of assaults in recent months on Jews in Williamsburg and Crown Heights.

The crime statistics and OPHC rollout were announced at a press conference de Blasio and police officials held Tuesday afternoon at the NYPD’s patrol Borough Brooklyn North headquarters in Bushwick.

“Many people who commit hate crimes hope that they will set off a chain reaction, that their hatred will inspire more hatred,” said de Blasio. “Our job is to achieve the opposite, to turn that hatred into something very different, to turn it around and help foster understanding, to bring people together, to create common cause between all communities, to push back and fight back the forces of hate.”

“It is ironic, and depressingly so, that at a time when crime rates have gone down, hate crimes, particularly anti-Semitic incidents, have skyrocketed,” Agudath Israel executive vice president Rabbi Chaim Dovid Zwiebel, one of many Jewish communal leaders in attendance, told Hamodia. “These figures are something that should be a cause of concern, not only to the Jewish community but to all of society.”