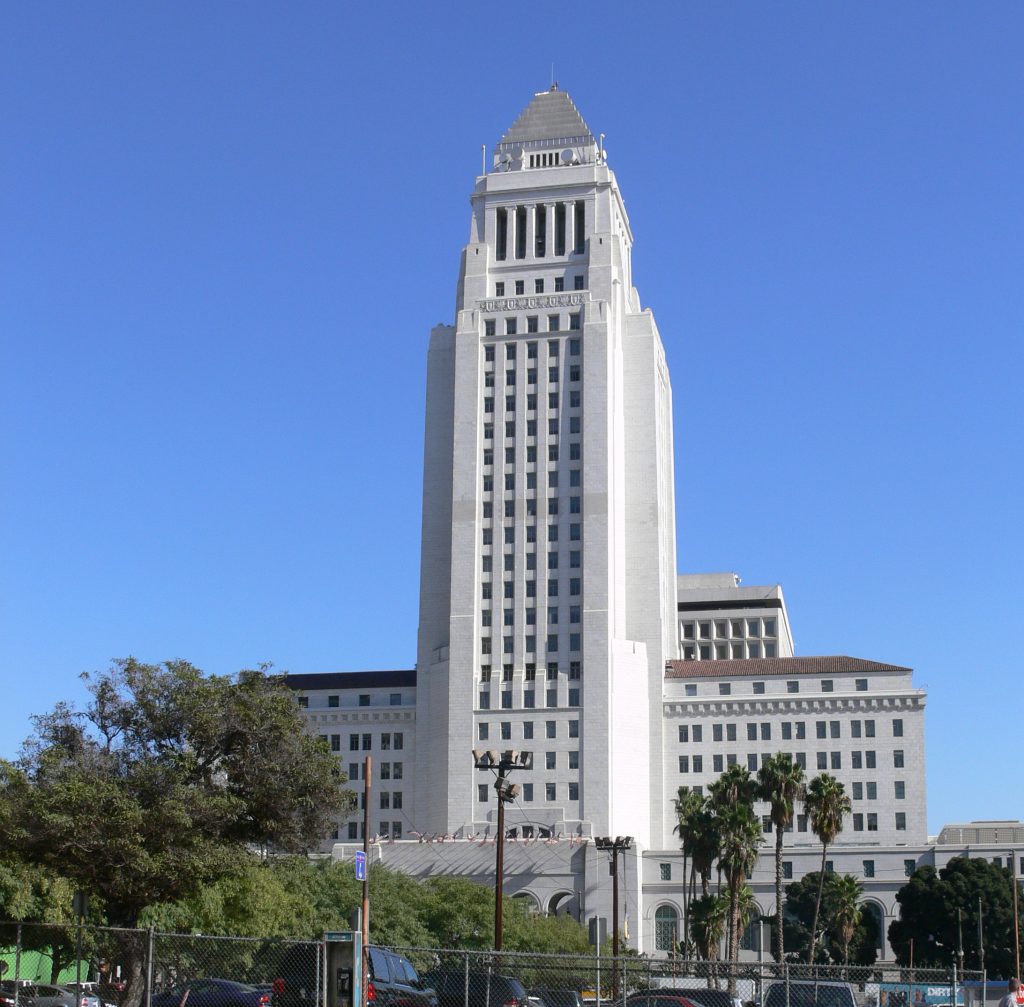 When faced with complaints earlier this year from city workers about rats infesting Los Angeles City Hall, most city officials said little about whether the problem was connected to several homeless camps right outside.

But a newly uncovered report from a pest control company hired by the city has raised fresh questions about whether officials wrongly downplayed that possibility during discussions at City Council meetings.

CatsUSA Pest Control, brought in to assess areas outside City Hall and nearby buildings, warned that homeless people create “harborage for rodents,” according to the report issued Dec. 28 and obtained last month through a public records request by a frequent critic of City Hall.

The company said it found “poor sanitary conditions” — including leftover food, human waste and hypodermic needles — and recommended that the city clear away the homeless population living in the Civic Center.

The findings were a topic of internal discussion for staffers at the Department of General Services, the agency that maintains city buildings. The day the one-page report was issued, a maintenance official sent an email to the department’s general manager, Tony Royster, describing the filth that had accumulated in the pits that surround City Hall, which are covered by metal grates.

“The homeless are using the grated areas above the pits as their bathroom,” wrote David Costa, building construction and maintenance superintendent. “This is also attracting the rats. Custodial will need to do some hazmat cleaning of the grates and the pits. There are even hypodermic needles being tossed in the pits along with human waste and other garbage.”

Two months after the report was issued, officials in the Personnel Department told council members they believed the increase in rat activity was triggered by the demolition of Parker Center, the former L.A. Police Department headquarters on Los Angeles Street. They delivered the same message to city workers in a letter sent the same month.

Councilman Joe Buscaino, who has criticized the city over its handling of sidewalk cleanups of homeless people, was the only council member to argue during council meetings that the camps attract vermin.

He said he was unaware of CatsUSA’s findings until he was contacted by the Los Angeles Times last month and said he always viewed the encampments, and not Parker Center, as the reason for the surge in rats.

“At the onset of this mess, I saw a correlation between the rat infestation and these encampments surrounding the Civic Center,” Buscaino said. “I’ve worked skid row as a police officer. I’ve done cleanups as a council member.”

The Department of General Services said in an email to the Times that it responded to the CatsUSA report by ordering regular cleanups of the sidewalks around City Hall and nearby municipal buildings.

Department officials didn’t directly mention the homeless encampments, or CatsUSA’s recommendation to clear them, at any of three council meetings devoted to discussing the rat infestation earlier this year.

Asked why that information wasn’t presented at the Feb. 8 meeting — the first one — Royster, told the Times that his agency had been asked to talk about strategies for addressing the rat problem.

The “discussion therefore primarily focused on the plans and steps taken by (various city departments) to comprehensively address this problem on the interior and exterior of City Hall and surrounding area,” Royster said.

Discussions with the council were based on observations by CatsUSA and county health officials that identified burrows, trash from uncovered dumpsters, debris from homeless encampments, unsecured food and overwatering of plants as possible sources of rodents, Royster said.

Cleanups of homeless camps currently take place every weekend in the Civic Center and include the disposal of hazardous materials, the removal and storage of items owned by homeless people, and the power washing of sidewalks, said Elena Stern, spokeswoman for the city’s Bureau of Sanitation.

City agencies can’t permanently remove homeless people from the areas around City Hall because they have a legal right to be on the sidewalks during certain times.

On Sunday, Council President Herb Wesson declined to comment on the CatsUSA report, saying he hadn’t seen it.

However, at a council meeting on the rat issue four months ago, he cautioned the public against blaming homeless individuals for the problem.

“I really want us to get to the facts,” Wesson said. “I do not want to have people who are unfortunately living on the streets blamed for something that they might not have anything to do with, but they’re just an easy target.”

The report was included in a larger trove of city correspondence about the city’s pest problem that was obtained by Eric Preven, a member of the Studio City Neighborhood Council. Preven secured the records through the California Public Records Act and shared them with the Times.

The documents provide a window into the alarm from city employees over rat sightings, rodent droppings and other pest-related issues. On Dec. 28, one exasperated department head emailed General Services noting that her staff had removed food and plants but had discovered that rodents also were eating paper.

“In my 31 years, I have never seen anything like this,” wrote City Clerk Holly Wolcott. “I again have to ask if efforts can be increased.”

The documents also show there were pest complaints — rats, mice or fleas — made at about 20 different locations within City Hall for a five-month period through February.

Preven said the report he obtained and the conditions it describes show a clear need for public restrooms to be installed outside City Hall.

“It’s the only humane, hygienic thing to do,” he said.

Since the rodent issues were identified, city agencies have trimmed trees in the Civic Center and removed vegetation. Those efforts have been carried out amid larger concerns about the spread of disease in downtown and other neighborhoods, as Los Angeles County prepares to reveal its annual point-in-time report on Tuesday that will probably show an increase in the number of people living on the streets.

Last month, state officials fined General Services and the LAPD after uncovering a rodent infestation and other unsanitary conditions at the LAPD’s Central Division station in skid row. General Services has filed an appeal.

The LAPD said one of its employees at the station has contracted the strain of bacteria that causes typhoid fever, although it’s unclear how the worker became ill.

Greenwood said she believes she contracted the disease from a flea. Typhus can be spread to humans through flea bites or contact with the feces of infected fleas; its symptoms include a rash, fever and fatigue.

Asked about the December report from CatsUSA, Greenwood said through her attorney that the city did not take seriously the recommendations of its own pest-control firm.

In a separate report issued in February, CatsUSA said it found no evidence of fleas inside City Hall or other municipal facilities. The report was posted on the council’s website, unlike the one issued two months earlier about unsanitary conditions in the Civic Center.