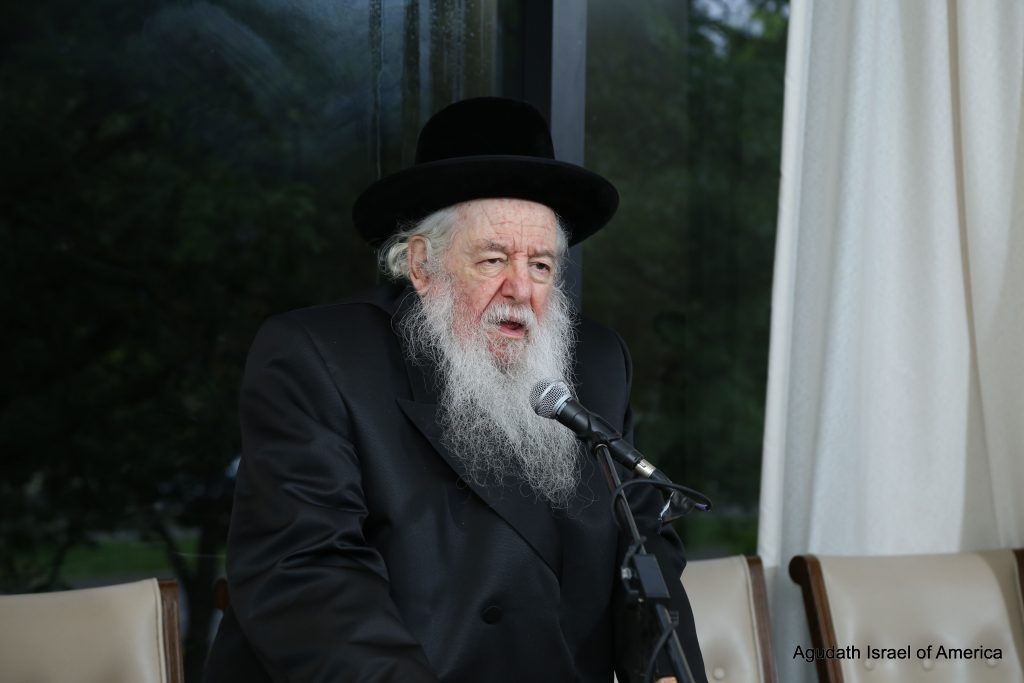 Excitement continues to build at an exponential pace for the 13th Global Siyum Hashas of Daf Yomi, an event that has galvanized the Torah community throughout the world. In addition to celebrating seven and a half years of daily limudim, the Siyum Hashas has sparked numerous ongoing learning initiatives while also inspiring countless people to embark on new journeys in Torah in the months and years ahead.

That was the message delivered to more than 140 Rabbonim by the Novominsker Rebbe,Harav Yaakov Perlow, Rosh Agudas Yisroel, at two separate meetings held on May 29th and 30th in advance of the Siyum Hashas, taking place in just over 200 days at MetLife Stadium in East Rutherford, New Jersey on January 1st, 2020. Both at the Yad Yosef Torah Center gathering for Flatbush’s Syrian Rabbonim and at the Ateres Golda event for Rabbonim of Boro Park and Flatbush, participants were urged to energize their baalei batim in their limudim by taking advantage of multiple learning programs for both adults and children that were launched ahead of the Siyum.

The Novominsker Rebbe noted that Torah learning has long been a tremendous unifier, an unshakeable bond that has sustained Klal Yisroel for centuries while other Jewish movements have vanished over time. Not only is this Siyum Hashas the culmination of the 13th Daf Yomi cycle, observed the Novominkser Rebbe, it is also a priceless opportunity to increase learning in Klal Yisroel while promoting achdus throughout the world. While historically many people have joined Daf Yomi programs and other types of learning after attending a Siyum Hashas, the upcoming conclusion of the Daf Yomi cycle has sparked an unprecedented wave of learning months in advance, with people all across the world joining learning programs so that they too can part of the tremendous simcha at this momentous global event.

Addressing the Sefardi Rabbonim, Harav David Ozeri, Mara d’asra of the Yad Yosef Torah Center, spoke about the growing momentum that has carried so many to the Beis Medrash and how entire communities have been invigorated through the Daf Yomi program. In his remarks to the Rabbonim of Boro Park and Flatbush, Rabbi Yaakov Horowitz, Rosh yeshiva of Yeshiva Beis Meir, discussed the importance of prioritizing limud HaTorah by seizing opportunities to learn both day and night. Also emphasizing the need to continue building on the momentum that has already begun sweeping the Torah world in advance of the 13th Siyum Hashas were Rabbi Chaim Dovid Zwiebel, executive vice president of the Agudah, Rabbi Labish Becker, executive director and vice president of project management of the Agudah, Rabbi Avraham Nisan Perl, director of the Agudah’s Commission on Torah Projects and Rabbi Shai Markowitz, director of the Agudah’s Lefkowitz Leadership Initiative.

To date more than 4,000 people in over 100 shuls have signed up for Chavrei HaSiyum, taking part in the daily program to complete meschtos and hold siyumim in conjunction with the Siyum Hashas. Additionally, 22,000 children in 85 yeshivos are involved in Masmidei HaSiyum, giving them an equal opportunity to delve deeply in the waters of Torah so that they too will be able to celebrate their own accomplishments at the Siyum.

“The enthusiasm we are witnessing for the Siyum has been remarkable,” said Rabbi Becker. “As a result of these gatherings alone, we have already seen the Sefardi Rabbonim committing to dividing up all of Shas between their shuls to be completed in time for the Siyum, while other Rabbonim have also approached us to discuss their plans to motivate their kehillos in their learning, particularly during the summer months. We look forward to everyone, from children to adults, joining us in this sweeping global wave of learning, the prelude to what will, b’ezras Hashem, be a massively historic event.”