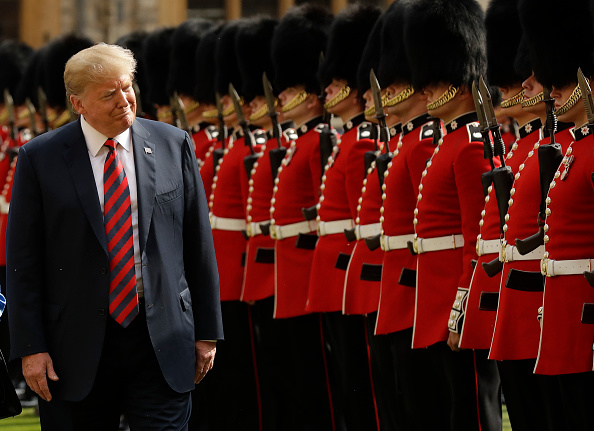 In Britain, a state visit doesn’t just mean dining with the prime minister, or even tea with the queen. It means an extraordinary level of pomp and pageantry, plus a sleepover at Buckingham Palace.

At least, it normally does.

Britain is gearing up for this week’s state visit by President Donald Trump as only Britain can do. There will be an official greeting ceremony at Buckingham Palace, a lavish banquet with the queen’s best china, a gun salute fired from Green Park and the Tower of London.

It will all be suitably over-the-top.

But there is also a sense that British officials are slightly less than enthusiastic about this particular round of state visit grandeur.

Some of the traditional trappings – such as staying over at Buckingham Palace, a royal welcome at the Horse Guards Parade and a gold carriage procession down the Mall – are notably absent.

“When extending a visit and making those plans concrete, you want to feel excited and joyful at the idea, and I think people have sort of seen it as something they have to get through,” said Leslie Vinjamuri, head of Chatham House’s Americas program.

But she added that there was still intense interest from the British public. “Anytime an American president comes to town it’s exciting, not necessarily for the right reasons, but certainly people are very aware around town, not least because of the traffic jams,” she said, referring to planned mass protests.

The British government, preoccupied with its own domestic turmoil, has long seemed wary about hosting President Trump for a state visit.

For one thing, it took a long time to pencil a date in the diary.

Britain is at its most delicate political moment in years. Now here comes Trump.

Prime Minister Theresa May extended the queen’s invitation in 2017, when Trump had been in the job for barely a week. Britain’s government, caught as off-guard as anyone by Trump’s election, scrambled to get in the new president’s good graces. The invitation was part of a charm offensive intended to win Trump’s favor.

But the idea was roundly panned by Britons from nearly every party who wondered why Trump was being accorded an honor that other world leaders wait years for – and most U.S. presidents never received at all. That Trump was widely loathed by the British public only added to the consternation.

Only a year earlier, Parliament had gone so far as to stage a formal debate over whether to ban President Trump from setting foot on British soil. For three hours, lawmakers sounded off on a then-candidate they described as a racist, a misogynist and “a dangerous fool.”

After the invitation, House of Commons Speaker John Bercow said Trump would not be welcome to address lawmakers at the Palace of Westminster, as other presidents had done.

“Our opposition to racism … and our support for equality before the law and an independent judiciary are hugely important considerations in the House of Commons,” he said.

Dozens of other parliamentarians campaigned to have the invitation retracted, and a citizens’ petition collected 1.9 million signatures before it was closed.

As recently as this spring, there was an active campaign among MPs to force the government to uninvite Trump.

But in April, more than two years after the invitation was first offered, Buckingham Palace announced that a three-day state visit would go forward.

That hasn’t quieted the opposition. London Mayor Sadiq Khan, with whom President Trump has feuded, said on Friday that as important as relations between the United States and Britain may be, “it’s wrong that the red carpet is rolled out.”

Up to a quarter-million protesters are expected to take to the streets in London to register their dismay. Hovering above will be a blimp depicting Trump as an overgrown baby – diaper firmly affixed, mobile phone in-hand.

Eight previous U.S. presidents have visited the queen during her long reign, dating back to Dwight Eisenhower in 1959. But Trump is only the third American leader to receive the honor of a state visit, following presidents George W. Bush and Barack Obama.

Unlike his predecessor, Trump won’t be staying overnight at Buckingham Palace, the official residence of the queen.

Instead, he will stay at Winfield House, the stately home of U.S. Ambassador Woody Johnson, which has the second-largest gardens in London (after Buckingham Palace). When Trump visited Britain last summer for a more modest working visit, he stayed there as well.

Buckingham Palace is reportedly unable to host the Trumps because of ongoing renovation work that began in 2016. According to the official royal website, Buckingham Palace has 775 rooms, including 52 “royal and guest bedrooms.”

Trump is known to hold the queen in high regard. He once told the Times of London that his Scottish-born mother “loved the queen … she loved the ceremonial and the beauty, because nobody does that like the English. And she had great respect for the queen.”

When Trump met the queen last year, there was a muddle over who should walk where when the duo was inspecting the queen’s honor guard. At one point, the queen gestured to Trump, seemingly to instruct him where to go. The internet went wild over the question of whether Trump had disrespected the queen by walking in front of her.

Over the next three days, President Trump will meet with several senior royals – though not American royal Meghan, Duchess of Sussex, who gave birth last month. (She previously called Trump “misogynistic;” last week he called her “nasty.”) He is scheduled to have a private lunch with the queen and tea with Prince Charles and Camilla. On the final day of his visit, he will join the queen and Prince Charles to commemorate the 75th anniversary of the D-Day landings.

But whatever happens over the next few days, the queen, one expects, will be as inscrutable as ever.

“That’s the queen’s job, dealing with people whether she likes them or not,” said Robert Lacey, a royal biographer, who noted that the queen may not have liked all of 13 British prime ministers who have served during her long reign, but she still meets them every week for “audiences” and “treats them with total dignity.”