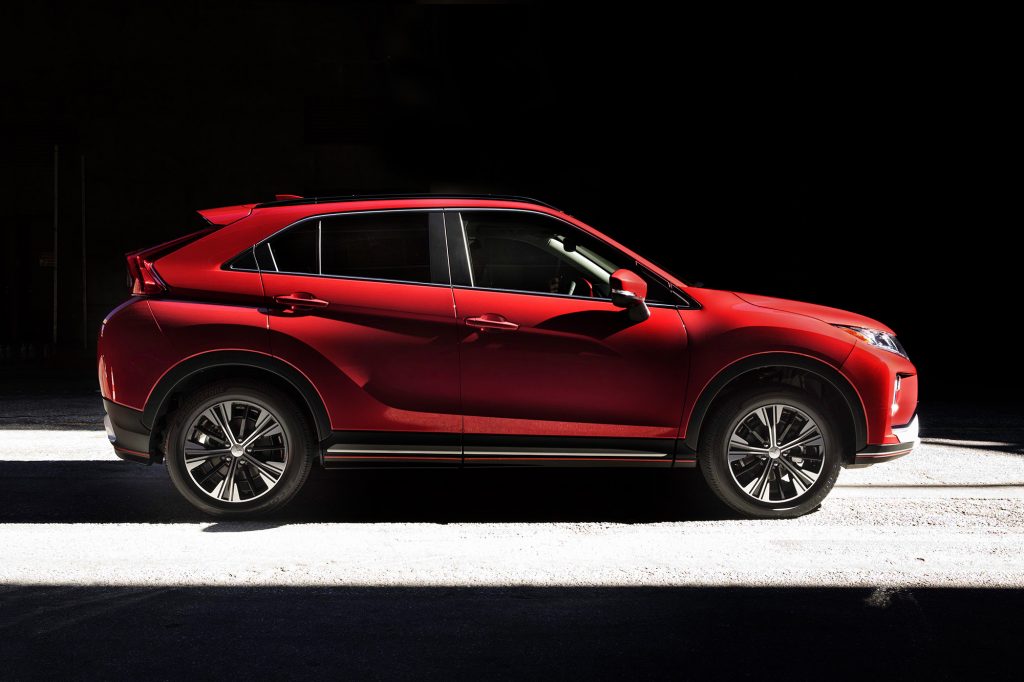 And one the longest lasting names was the Mitsubishi Eclipse, sold stateside from 1989 through 2011, and always fairly popular, something that couldn’t be said of most Mitsubishis. The company, best known for its room air conditioners, has struggled for visibility in the U.S. market for decades. If you need to get a sense of the company’s desperation in being of any consequence, consider the name of its newest compact crossover SUV: the Mitsubishi Eclipse Cross.

But don’t let the Eclipse name fool you; this five-door crossover is far from sporty, desirable or even good-looking. While you might find its samurai sword chrome grille accents oddly appealing, its weirdly creased rear hatch impedes rear visibility and reminds many observers of the late, unlamented Pontiac Aztek. In an effort to stand apart, it tries too hard.

Hey, at least the Eclipse Cross is easy to find in a parking lot.

But maybe you like the looks, and you’re impressed that its price starts at a reasonable $23,595 and comes with a five-year/60,000-mile basic warranty, a 10-year/100,000-mile powertrain warranty, and standard all-wheel drive on all trim levels except for that inexpensive base model.

But don’t let the bargain price fool you. The disenchantment starts the minute you climb inside. You’d be hard-pressed to find a worse new car odor than the stomach-churning aroma that greets you in a new Mitsubishi. Consider it a pungent caveat of what’s to come, and it starts with its technology.

For a company that manufactures a vehicle meant to attract younger buyers, it’s astounding that the Eclipse Cross has one of the worst infotainment systems offered in a new car. Unintuitive, slow and poorly designed, its interface is operated via touchscreen and/or a touchpad on the center console. There are no knobs or shortcut buttons. There’s no navigation system. And it infuriatingly fails to automatically connect with your smart phone every time you start the car. You can mitigate this somewhat by opting for the more expensive SE or SEL trims, since they offer Apple CarPlay and Android Auto Connectivity. And while there are USB ports, wireless charging is not offered.

Power comes courtesy of a turbocharged 1.5-liter four-cylinder mated to a continuously variable automatic transmission that’s tuned more for fuel economy than performance. Even so, this driveline proved inadequate for both. Power and acceleration are adequate around town, but severely lacking for highway merging or at higher speeds. What power is available is strangled by a parsimonious transmission that hesitates before offering up more juice.

The mediocre power only exacerbates this vehicle’s lousy suspension tuning. Neither comfortable nor sporty, the Eclipse Cross easily loses its composure, with cornering that brings out more lean than your local congressman. Leaning dramatically in corners, it easily loses grip over bumps, which retards performance as the driveline nannies kick in. Engine noise is minimal, although road noise is excessive crossing anything except pristine blacktop.

Your safety shouldn’t come at a price — but it does with the Eclipse Cross. For example, blind spot monitoring and rear cross traffic alert are available only on the top two trim levels while the most advanced safety features — automatic emergency braking, forward collision mitigation, lane departure warning, and adaptive cruise control — are only available in the $2,500 Touring Package on the $30,695 model. Even if you were to consider popping more than 30 big ones, why would you spend so much money on this rig?

Given its many competitors, all of whom outclass it, there’s little to recommend the 2019 Mitsubishi Eclipse Cross, ensuring the company’s continued anonymity in the American market.