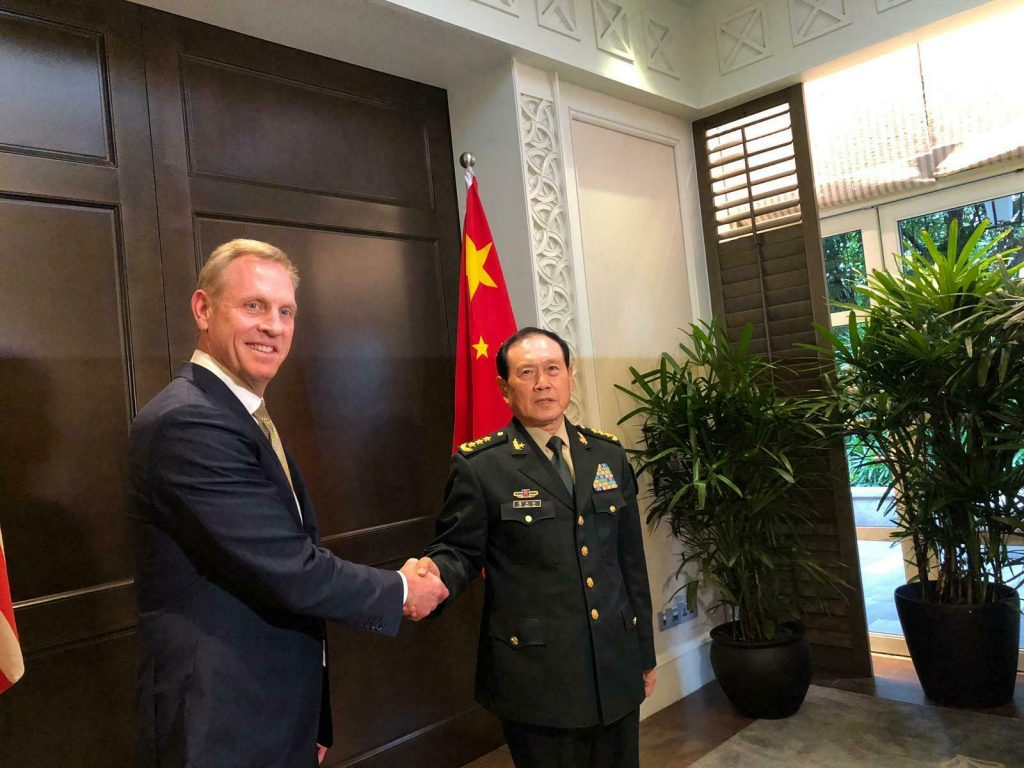 Acting Defense Secretary Patrick Shanahan on Saturday denounced China’s efforts to steal technology from other nations and militarize man-made outposts in the South China Sea as a “toolkit of coercion,” saying activities by Beijing the U.S. perceives as hostile must end.

In his first major speech on the international stage, Shanahan mixed sharp criticism of China and warnings of North Korea’s “extraordinary” threat with vows that the U.S. will remain strongly committed to the Indo-Pacific region and is ready to invest billions of dollars in securing its stability.

While he didn’t specifically name China in early parts of his speech, he made clear who his target was, making pointed references to Beijing’s campaign to put advanced weapons systems on disputed islands in the region.

“If these trends in these behaviors continue, artificial features in the global commons could become tollbooths. Sovereignty could become the purview of the powerful,” Shanahan said.

His remarks underscore America’s frayed relations with China, as the Trump administration wages a trade war with Beijing, imposes sanctions on Chinese tech giant Huawei and approves a weapons sale to Taiwan, the self-ruled island the Communist mainland claims as its own territory. And they reflect America’s new national defense strategy that declared great power competition with China and Russia as top priorities.

Shanahan’s speech is also arguably an audition to both the world and U.S. top leaders in Congress, as his nomination for permanent secretary has still not been sent to Capitol Hill by President Donald Trump.

And listening closely in the audience were nervous allies and partners in the region who are worried about the economic impact of the U.S.-China trade dispute and the political blowback of America’s complaints about Beijing’s rapid progress in hypersonic weapons, nuclear technology and space launches.

Lt. Gen. Shao Yuanming, a senior Chinese officer, said he welcomed deeper communication between China and the U.S., but he expressed strong opposition to some of Shanahan’s comments on U.S. relations with Taiwan and China’s operations in the South China Sea. He said China has strong legal claims to the waterway, and that Beijing has put necessary “deterrent facilities” there in response to U.S. provocation involving military exercises in that region.

Shanahan told reporters Friday that he would use his speech to the Shangri-La Dialogue conference to criticize Beijing’s use of coercion to advance its interests. And after his remarks, during questions from the audience, he suggested that his speech was more directly critical than those of other U.S. defense secretaries in the past.

“I won’t apologize for the way I framed some of my remarks, but we’re not going to ignore Chinese behavior,” Shanahan said. “I think in the past people have kind of tiptoed around that. It’s not about being confrontational, it’s about being open and having a dialogue.”

Shanahan, however, is one of several Pentagon chiefs to take aim at China during the Singapore conference. In 2014, for example, then-Secretary Chuck Hagel used the podium to slam China for cyberspying and said the U.S. would not look away while Beijing’s territorial claims destabilized the region and threatened Asia’s long-term progress.

Still, Shanahan said the U.S. is willing to cooperate with China and welcomes competition, but said behavior that erodes other nations’ sovereignty and sows distrust of China’s intentions must end.

“Competition does not mean conflict,” he said. “Competition is not to be feared. We should welcome it, provided that everyone plays by internationally established rules.”

He also rejected suggestions that the U.S. is in a “face-off” or trade war with China, and said economic negotiations with Beijing are ongoing and the Pentagon is building relations with the Chinese military.

But he went on to restate America’s distrust of Huawei, the world’s No. 1 network equipment provider and second-largest smartphone maker. The U.S. claims Huawei is legally beholden to China’s ruling Communists, which could use the company’s products, including its next-generation wireless network known as 5G, for cyberespionage.

Shanahan said Huawei is “too close to the government” of China, which has laws requiring data be shared.

“That’s too much risk for the department,” said Shanahan. “You can’t trust that those networks are going to be protected.”

China warned Friday that that it was drawing up a list of “unreliable” foreign companies, organizations and individuals for targeting in what could signal retaliation for U.S. sanctions on Huawei.

Much of Shanahan’s speech centered on America’s work with partners across the region.

But he also called on the Pacific nations to invest in their own futures.

Several U.S. senators attending the conference gave Shanahan high marks for his speech, saying his criticism of China hit the right tone. Sen. Angus King, an independent from Maine, said Shanahan “distinguished himself” in his remarks, including assertions that conflict with China is not inevitable.

King stopped short of saying he would vote for Shanahan when his nomination hits the Senate, but Sen. Tammy Duckworth, an Illinois Democrat, said she was impressed and is now more inclined to support him.

On North Korea, Shanahan said the U.S. is focused on negotiations to achieve full denuclearization of the Korean Peninsula, adding that the North “has neared a point where it could credibly strike regional allies, U.S. territory and our forward-deployed forces.”

He credited China for its cooperation on enforcing U.N. sanctions against Pyongyang.

In a departure from past conferences, however, Shanahan faced little backlash from the Chinese leaders in the audience during the question-and-answer session.

On Friday, Chinese defense ministry spokesman Wu Qian was both conciliatory and challenging.

Wu told reporters that the U.S. has recently “had a series of negative words and deeds” on Taiwan issues.

“On the issue of safeguarding national sovereignty and territorial integrity, the U.S. should not underestimate the determination of the Chinese military, will or ability,” he said.