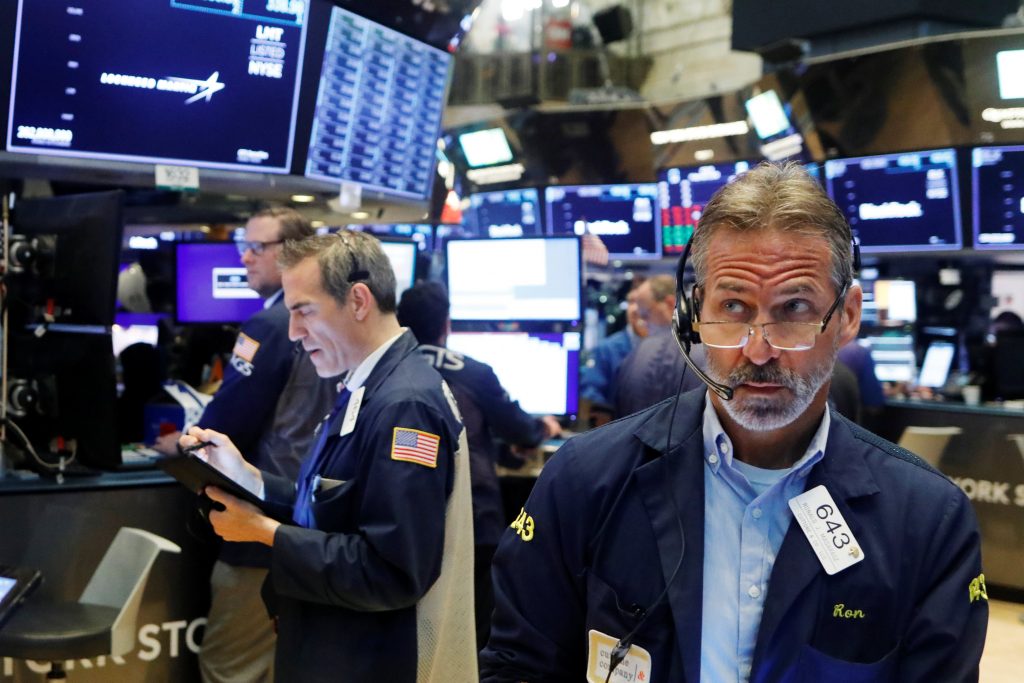 Stocks tumbled on Wall Street Friday after the U.S. announced plans to expand its trade war to Mexico.

The slump all but guarantees the market will end May with its first monthly loss of 2019.

The new front in the trade war is hitting automakers particularly hard. Many of them import vehicles into the U.S. from Mexico.

Technology stocks led the decliners. They have been hurt the most over escalating rhetoric and tariffs in the U.S. trade war with China. Cisco fell 1.9% and Microsoft fell 1.3%.

Banks were among the sharpest decliners, as higher bond prices pushed yields lower. Investors have been shifting more money into bonds over concerns that economic growth will be crimped by the ongoing trade war. Lower interest rates make lending less profitable for banks. Citigroup fell 1.4% and Bank of America fell 1.2%.

Utilities fared better than most sectors and swayed between small gains and losses. The sector is considered less risky by investors when economic growth is threatened.

Investors have been fleeing to safer holdings all month. The shift to utilities and bonds quickened earlier in May after the U.S. and China broke off negotiations. The U.S. then pushed more tariffs on Chinese goods along with a ban on technology sales. That prompted retaliatory tariffs from China and threats over other key resources.

“Clearly the markets were blindsided and completely caught off guard,” said Cliff Hodge, director of investments for Cornerstone Wealth.

The major risk, he said, is that continued trade spats could bring on a global recession. Auto companies and agricultural companies will have a harder time passing costs on to consumers. Also, investors are worried about further escalation of global trade spats.

“The fact that the president is willing to use tariffs as a weapon can really cause damage to business confidence,” Hodge said. “You’ve got to be wondering, who’s next?”

TRADE WAR WOES: The new front in the U.S. trade war will have a wide impact on companies making everything from cars to beer and tacos.

Railroad operators are also getting squeezed. Kansas City Southern fell 5.8%. The company gets almost half its revenue from Mexico each year. Union Pacific also shed 1.4%.

Companies that sell food and groceries are also feeling the pinch. Walmart fell 1.3% and Kroger fell 1.1%.

MAYDAY, MAYDAY: May marks the first monthly loss for the market in 2019. That’s a sharp shift from stocks’ record-setting run so far this year. The S&P 500 hit an all-time high on April 30, back when investors had factored in a resolution to Trump’s trade wars.

Since then investors have fled to safe play holdings like utilities and bonds. Technology stocks, which led gains all year, were among the biggest losers in May. The technology-heavy Nasdaq fell 7.3%, and technology companies within the S&P 500 fell 8.1%.

Utilities, which have lagged the market, were among the best performers in May. They shed “merely” 1.9%. Meanwhile, real-estate stocks posted a 1% gain, the only winners this month.

STUCK IN A GAP: Clothing and apparel retailer Gap plunged 14.9% after the company gave investors a weak earnings report and slashed its full-year profit forecast.

The disappointing results and estimates come three months after the retailer said it was creating two independent publicly traded companies: low-priced juggernaut Old Navy and a yet-to-be named company that will encompass the iconic Gap brand and Banana Republic, as well as the lesser known names Athleta, Intermix and Hill City.

Overall sales and sales at established stores fell during the quarter. Sales at its namesake Gap stores plunged 10%.

“This quarter was extremely challenging, and we are not at all satisfied with our results,” Art Peck, president and CEO of Gap, said in a statement.

CUSHY RESULTS: Williams-Sonoma rose 10.4% after the seller of cookware and home furnishings reported surprisingly strong first-quarter financial results and raised its profit forecast for the year.

The company also attracted a surge of customers to its stores during the quarter. Sales at established stores rose 3.5%, blowing away Wall Street forecasts of a 1.6% increase.