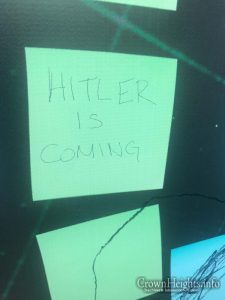 A mural outside the Jewish Children’s Museum where people can place sticky notes with their good deeds was defaced with an anti-Semitic message Thursday. The museum is situated on the highly trafficked corner of Eastern Parkway and Kingston Ave. in Crown Heights.

The note with the words “Hitler is Coming” was allegedly placed on the wall by a black teenager at around 5:30pm Thursday.

The note was discovered immediately, and photos taken of the person who is believed to have placed the note.

The incident was reported to the police.

New York Gov. Andrew Cuomo said he is directing the State Police Hate Crimes Task Force to assist the NYPD in the investigation.

“We have zero tolerance for anti-Semitism, discrimination or hate of any kind in New York, and no person should ever feel threatened because of their religious beliefs,” the governor said.”I have visited this great museum, built in honor of Ari Halberstam who was tragically killed in an anti-Semitic terror attack on the Brooklyn Bridge, after it received threats in the past. It’s all more distressing for this institution built to bring together children of all faiths and backgrounds to foster tolerance to be targeted.

“In the wake of a rise in anti-Semitic and other hate crimes in our nation, it is more important than ever that we stand united to condemn these despicable acts of violence and root out hate in all its forms.”