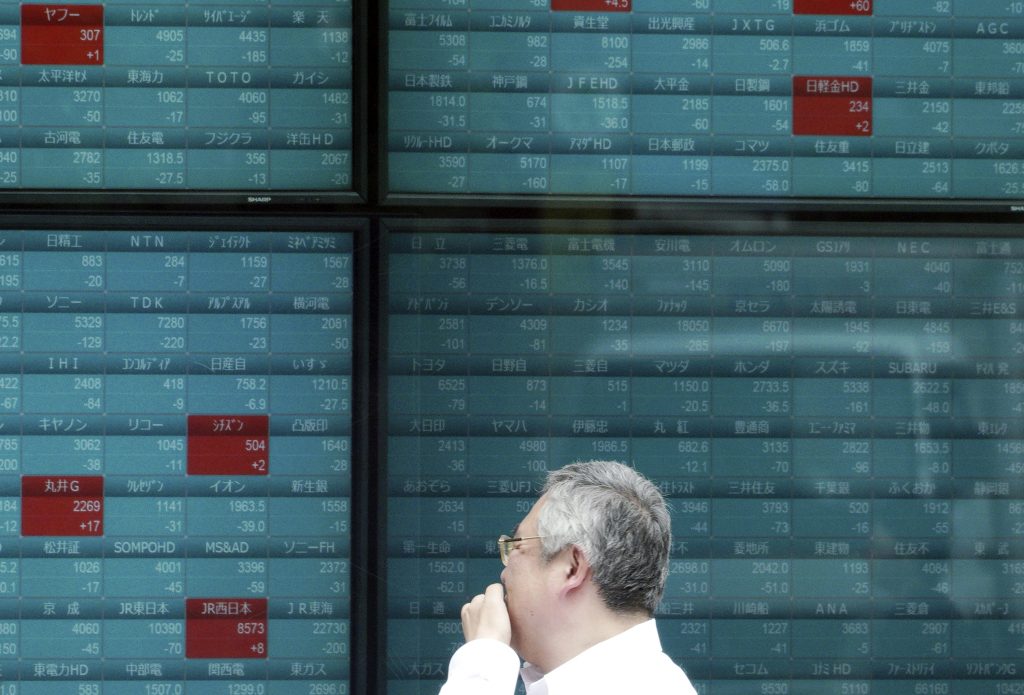 Asian shares fell on Wednesday and bonds rallied as investor sentiment soured over growing worries about world growth with trade tensions between the United States and China showing no signs of easing.

MSCI’s broadest index of Asia-Pacific shares outside Japan slipped 0.5% after three straight days of gains. Chinese shares started on the back foot but bounced off early losses to be marginally higher. Australian shares ended 0.7% lower while Japan’s Nikkei faltered 1.2%.

In an indication U.S. markets will fall again on Wednesday, E-Minis for the S&P 500 stumbled 0.3%. In early European trading, the pan-region Euro Stoxx 50 futures were down 0.7% as were German DAX futures while those for London’s FTSE and France’s CAC 40 eased 0.6% each.

Risk aversion has increased globally in recent days as fears of world recession resurfaced amid disappointing macro data in major economies. Wins for euroskeptic parties in EU elections as well as a snap poll in Greece and political turmoil in Austria have added to the gloomy outlook.

Italy’s dispute with the European Commission over its budget is also a major overhang for world markets.

In Asia, focus remains on the ongoing Sino-U.S. trade war. President Donald Trump said on Monday that Washington was not prepared to make a deal with China yet. In response, Chinese newspapers warned on Wednesday Beijing is ready to use rare earths to strike back at the United States.

The tariff skirmish is not limited to China, though. Trump has also pressed Japan to reduce its trade imbalance with the United States.

The spectre of prolonged trade friction drove U.S. 10-year yields about 10 basis points below the 3-month rates, an inversion typically seen as a leading indicator of a recession. German Bund yields are also on a slippery slope.

“What I see as more consistent is that typically when the yield curve inverts you get central bank easings. So the question about recession would be would the U.S. Fed ease enough to avoid a recession?” said Chris Rands, Sydney-based fixed income portfolio manager at Nikko Asset Management.

“My reading of what is going on at the moment is that U.S. economic data seems to be flicking away, and the market is starting to tell us that rate cuts will eventually be coming,” Rands added.

U.S. rates futures are pricing in two cuts by the Federal Reserve by the middle of next year to help prop up the country’s economy.

Data this week showed a gauge of U.S. manufacturing activity unexpectedly fell in May from the previous month.

“The fact that you have got a bit more noise around the trade war now at the same time as manufacturing is rolling over it’s getting people to think that things are a little bit worse than they had expected,” he said.

Analysts at Citi reckon punitive measures against China’s Huawei and other tech firms, as part of the tariff battle, could undermine global productivity growth.

“Technological rivalry is here to stay,” Citi analyst Johanna Chua said in a note, adding “it is hard to be constructive (on) risk assets in Asia at this juncture.”

“We maintain a bias to be long U.S. dollar-Asia…As growth is likely to significantly outweigh inflation concerns, we expect Asian central banks bias will remain on the accommodative side.”

In currencies, activity was muted.

In commodity markets, oil prices were subdued on Wednesday as worries the Sino-U.S. trade war could trigger a global economic downturn dominated, despite the risk of supply shortfall from U.S. floods and political tensions in the Middle East.