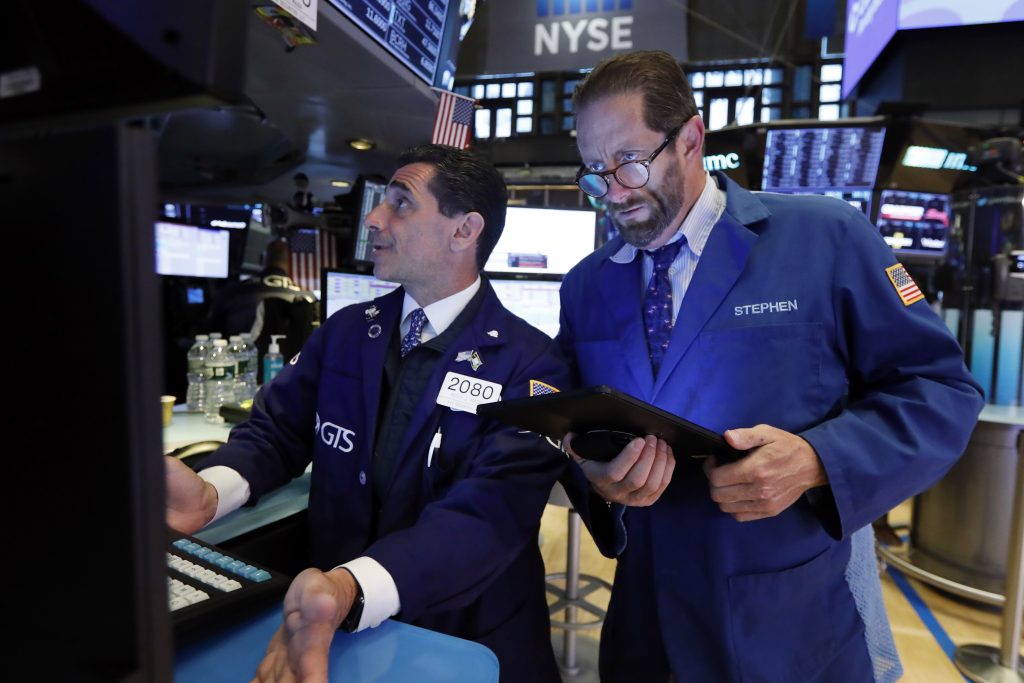 Investors appeared to turn cautious Tuesday as U.S. stocks relinquished most of an early gain on Wall Street.

The major stock indexes were essentially flat or up slightly as gains in communications and technology stocks outweighed losses in consumer staples, utilities and most other sectors.

The market is coming off its third straight weekly loss. U.S. markets were closed Monday for the Memorial Day holiday.

Trading has been choppy over the last several weeks as investors grapple with the possibility of a prolonged trade war between the U.S. and China. The nations escalated the dispute earlier this month by raising tariffs on each other.

The U.S. went even further and proposed a ban on technology sales to certain Chinese companies. That has added even more volatility to technology stocks that are already sensitive to the ups and downs of trade negotiations.

Still, bond prices rose, pulling down the yield on the 10-year Treasury to 2.27%, its lowest level since October 2017. That held back gains for banks and other financial companies that rely on higher yields to make more profit from interest on loans. Goldman Sachs Group slid 1.1%.

Rising bond prices are normally a sign that investors feel jittery about long-term growth prospects and would rather put their money into safer holdings. Morgan Stanley is warning that the stock market faces a lot more volatility because of weak economic data and the trade war. It also cautioned that those factors are also increasing the risk that the U.S. economy could slide into a recession.

Investors have been weighing a mix of encouraging and discouraging economic reports this year as they also keep an eye on unpredictable swings in the trade war.

Equities have been gaining ground all year as U.S. data shows solid job growth. But investors are still concerned that economic growth could slow globally.

“This isn’t just about the U.S. and China,” Nick said. “It’s about everybody sensing there is something to brace for.”

Tuesday started off mostly quiet for individual stocks with corporate earnings reports all but completed for the broad S&P 500 index. SeaWorld surged 17.3% after it announced a stock buyback and increased investment from a hedge fund.

REVVING VALUE: Fiat Chrysler shares gave up an early gain, sliding 0.9% after the carmaker proposed a merger with France’s Renault.

A combination between the companies would create the world’s third largest automaker and reshape the global industry. It would top General Motors’ production and trail Volkswagen and Toyota.

Renault welcomed what it called a “friendly” offer. Automakers have collaborated more in recent years as they come under pressure to invest heavily in developing electric cars, self-driving vehicles and in-car connectivity.

PROCESSING GAINS: Total System Services climbed 5.7% following the announcement that the payments processor is being bought by Global Payments.

The stock deal is valued at $21.5 billion and it is the third major acquisition in the payment technology sector this year.

Traditional payment processors like Global Payments are consolidating as they compete with upstarts like PayPal and Square, which is led by Twitter co-founder Jack Dorsey. Global Payments shares slipped 2.1%.

SLIPPERY SECURITY: First American Financial fell 4.4% because of a security lapse that exposed bank account numbers and other sensitive information.

The real estate title company confirmed the lapse on Friday.

A flaw in an internet application allowed anyone with a web browser to see the confidential data in 885 million files. If the 885 million records were harvested, it would rank among the biggest leaks of data on the internet.