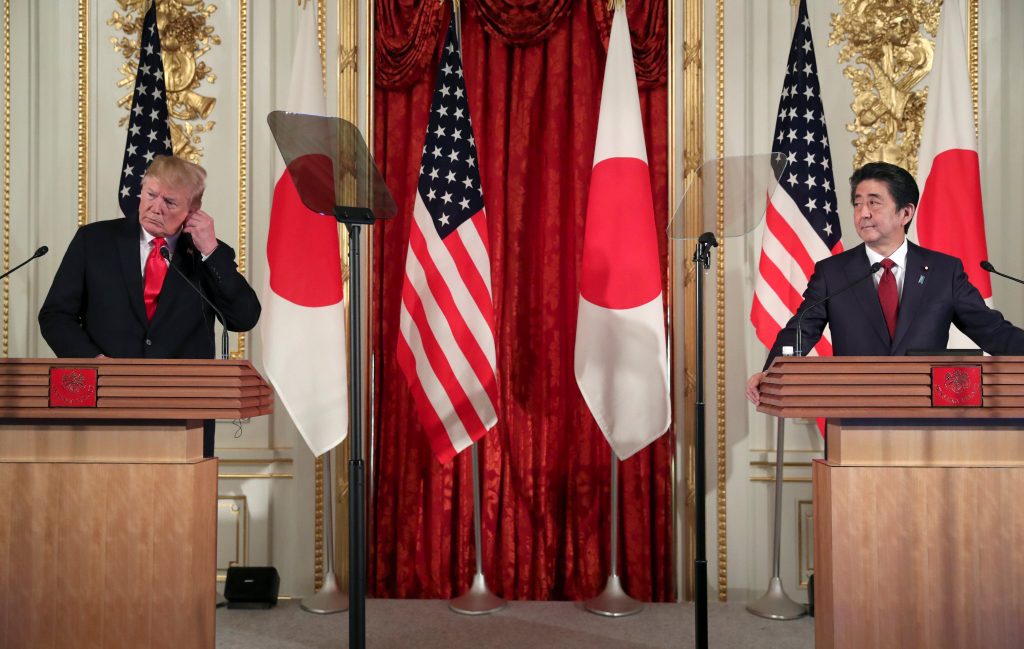 President Donald Trump pressed Japanese Prime Minister Shinzo Abe on Monday to even out a trade imbalance with the United States and said he was happy with how things were going with North Korea.

Trump is on a four-day state visit to Japan meant to showcase the alliance between the two allies, but which has also been shadowed by trade tensions.

Trump, at a news conference with Abe after a summit, said his goal was to remove trade barriers to put U.S. exports on an equal footing in Japan. He said he hoped to have more to announce on trade very soon and said the two had agreed to expand cooperation in human space exploration.

Abe, for his part, said the two leaders had agreed to accelerate two-way trade talks.

Trump earlier explicitly linked trade and security, a connection that disturbs Japan, which puts its U.S. alliance at the core of its defense policies.

“It’s all a balance sheet thing,” Trump said at the beginning of his talks with Abe.

“When I talk about a security threat, I talk about a balance sheet,” he said, adding that Japan had bought “tremendous amounts” of U.S. military gear.

On Sunday, Trump tweeted that he expected big moves on trade would wait until after Japan’s upper house election in July.

“Trade-wise, I think we’ll be announcing some things, probably in August, that will be very good for both countries,” Trump said on Monday. “We’ll get the balance of trade, I think, straightened out rapidly.” ​ Abe, who has developed close ties with Trump since the U.S. leader came to office, stressed the closeness of ties.

“This visit of President Trump and Madame Trump is a golden opportunity to clearly show the unshakable bond to the whole world and inside Japan as well,” Abe told the news conference.

Earlier, Trump was greeted by Emperor Naruhito and his Harvard-educated wife at the imperial palace in Tokyo in a formal welcome ceremony broadcast live on national television.

Trump is the first foreign dignitary to be received by the monarch since the latter inherited the throne after his father, Akihito, stepped down recently in the first abdication by a Japanese emperor in two centuries.

The president and emperor and their wives returned outside to walk a red carpet and stand under a hot sun while a military band played the national anthems of both countries.

Trump then walked the red carpet again, waving at assembled school children and inspecting Japanese troops before a military band played a formal salute as he stood solemnly on a raised platform.

Trump has made clear he was pleased to have the honor of the first reception with the emperor, who is hosting a state dinner for the U.S. leader and his wife on Monday.

Trump and Abe have put on a show of friendship but have policy disagreements over trade and North Korea. Trump has threatened to target Japanese automakers with high tariffs. He has also spearheaded an expensive trade dispute with China. That trade war between the world’s two largest economies has hurt markets worldwide and confounded U.S. allies, including Japan and the European Union.

“I personally think that lots of good things will come with North Korea. I feel that. I may be right, I may be wrong, but I feel that,” Trump said on Monday.

On Sunday Trump had said he was not worried about a recent missile launch by North Korea. That put him at odds with his own national security adviser, John Bolton, who said on Saturday that Pyongyang’s recent short-range missile tests violated U.N. Security Council resolutions.

They also discussed Iran. Abe is considering a trip there next month, domestic media said, to try to soothe rising tension between Iran and the United States.