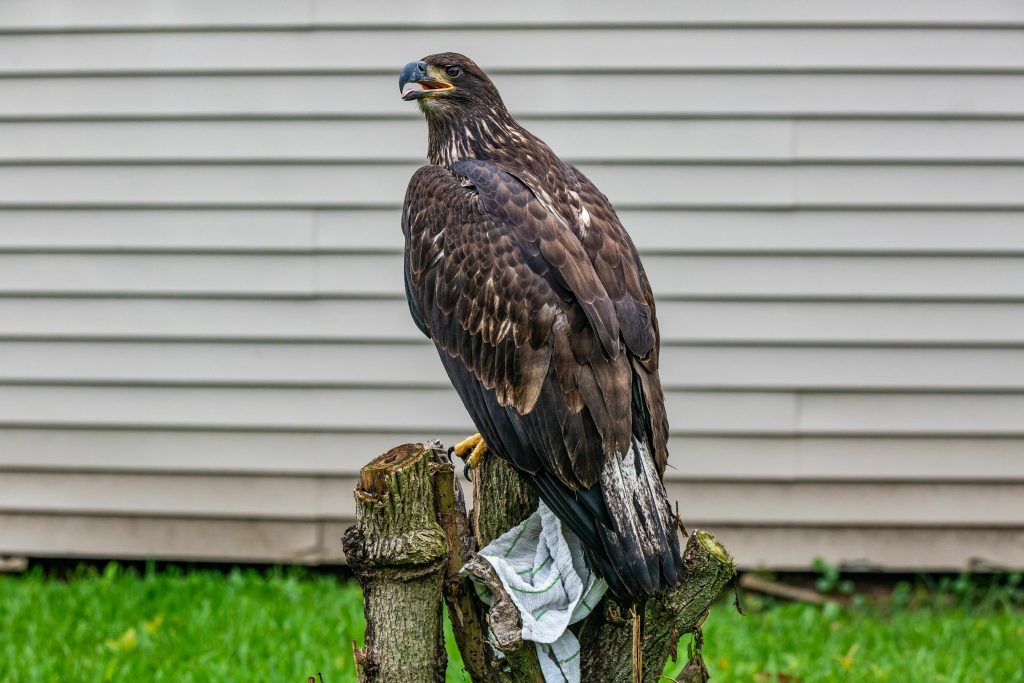 A young bald eagle found soaked and stumping along a street in the Louisiana neighborhood where it hatched will be released Tuesday in the same area. The bird’s parents have nested for a couple of years in a tall live oak in a subdivision back yard in Metairie, a New Orleans suburb.

A neighborhood resident brought the mottled brown eaglet to the Louisiana State University School of Veterinary Medicine’s Wildlife Hospital on May 11, after making sure it needed help. Another neighbor has been collecting money for its care and posting health updates outside her home.

“Our Eagle is doing well and is flying. … Thanks to all who donated to her recovery. YEA!” read a handwritten message on a paper grocery bag set over a signpost.

The first flights of bald eagles often leave the bird stranded on the ground, but their parents generally keep feeding them until they fly again, according to the Journey North citizen science center at the University of Wisconsin-Madison Arboretum.

However, this bird and its sibling began flying in late April.

They’d made regular flights to and from other trees and light poles in the neighborhood before a neighbor saw this one walking in the street the evening of May 10, said Susan Miron, whose driveway faces the nest. A driver spotted the eaglet, stopped traffic and shooed the bird to a yard, she said.

Coastal consultant and photographer P.J. Hahn, who has been photographing the birds since the parents began building the nest, said he was called for advice when the eaglet was still in the street.

“Everyone was afraid to touch it” because of federal laws protecting raptors, Hahn recalled Friday. “I said, ‘Look. Somebody’s going to run over it. We’ve got to get it out of the street.'”

He also called the veterinary school, Louisiana Department of Wildlife and Fisheries and others, but it was Friday night and nobody was in. To protect the pedestrian bird from dogs, they put it in a pet transportation crate overnight. When they let it out the next morning, it barely managed to flap to a fence and off again. Then it stayed on the ground, Hahn said.

Its nestmate stayed in a tree above the grounded eaglet, calling out loudly, he said.

Veterinarians didn’t find any broken or injured bones, so they think the bird had a muscle injury, veterinary school spokeswoman Ginger Guttner said in a news release Friday.

The birds are clumsy when learning to fly, Hahn said. “They fly into a tree and hit it hard. … I’m sure it probably bruised its shoulder.”

The Wildlife Hospital treats about 2,000 wild animals a year and doesn’t charge the people who bring them in. Miron printed flyers asking for donations and put them in the sort of covered box used to hold flyers for houses put up for sale. Next to the box is a big yellow arrow with the words “HELP EAGLE” on it. Some $300 was collected.