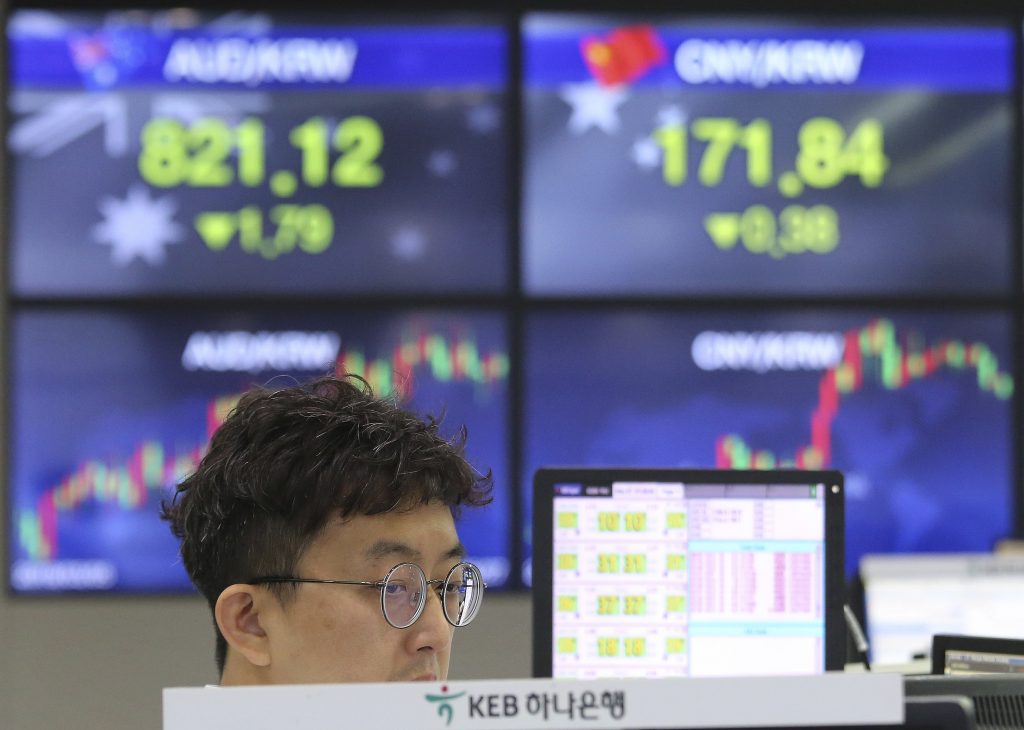 Asia stocks inched up but remained near four-month lows on Monday amid concerns about U.S.-China tensions while the euro stayed in a narrow range after the weekend’s European Parliament elections.

MSCI’s broadest index of Asia-Pacific shares outside Japan rose 0.2%, off a four-month low touched on Friday, with market holidays in the U.S. and U.K. denting trading volumes.

European shares were expected to open modestly higher, with futures for Eurex, EURO STOXX 50 index and Germany’s DAX ticking up 0.4% and 0.3%, respectively.

Casting a shadow over many share markets were worries that the China-U.S. trade conflict was turning into a technology cold war between the world’s two largest economies.

Wall Street’s major indexes edged higher on Friday in a rebound from the previous session after comments from U.S. President Donald Trump on trade relations with China provided markets a bit of a respite.

The euro was a shade higher at $1.1209, holding within a tight $1.2272-$1.2754 range in what was a limited reaction to partial returns in the European Parliament elections.

Analysts said the single currency’s muted reaction came as the results showed populist and far-right parties in some countries were unlikely to have gathered as much support as anticipated.

Parties committed to strengthening the European Union held on to two-thirds of seats in the EU Parliament, official projections from the bloc’s elections showed on Sunday, though far-right and nationalist opponents saw strong gains.

Macron’s Renaissance [Party], built on the ruins of center-left and center-right parties, added to gains for liberals at the EU level as turnout bounced sharply across the bloc. Along with a surge for the Greens, that meant four groups occupying the pro-EU middle ground lost under 20 seats, securing 505 seats out of 751.

“With a turnout of more than 50%, European elections were far less of a non-event than usual,” Robert Carnell, ING Asia-Pacific research head, said in a note to clients.

“This was not a ringing endorsement for Euroskepticism – with only 22% of the seats going to EU skeptical parties, and even this bolstered by what may be a temporary surge in the UK’s Brexit party seats, the EU Parliament remains a largely pro-European institution.”

A centrist, pro-EU coalition would still be possible in the new chamber that will sit for the first time on July 2. But it would be more difficult to piece together among more numerous partners, according to the European Parliament’s estimates.

“It’s difficult to foresee what will happen to Brexit, the political situation in Italy and elections in Greece just by looking at the vote count,” said Shin Kadota, senior strategist at Barclays in Tokyo.

“We may not see an immediate market reaction, as the election outcome will have to seep in first before beginning to have a political impact on the various countries.”

The pound was 0.2% higher at $1.2740. Sterling had bounced back from a near five-month trough of $1.2605 after British Prime Minister Theresa May said she would quit.

The dollar index against a basket of six major currencies was little changed at 97.575.

China’s yuan rose to a 1½-week high against the U.S. dollar on Monday, buoyed by a senior official’s warning not to bet against the Chinese currency.

China’s banking and insurance regulator said over the weekend that it did not expect a persistent decline in the yuan and warned speculative short sellers they would suffer “heavy losses” if they bet against the currency.

Oil prices fell on Monday, extending losses from last week when crude dropped the most this year on concerns the Sino-U.S. trade war could trigger a broad economic slowdown, although OPEC’s supply cuts provided some support.