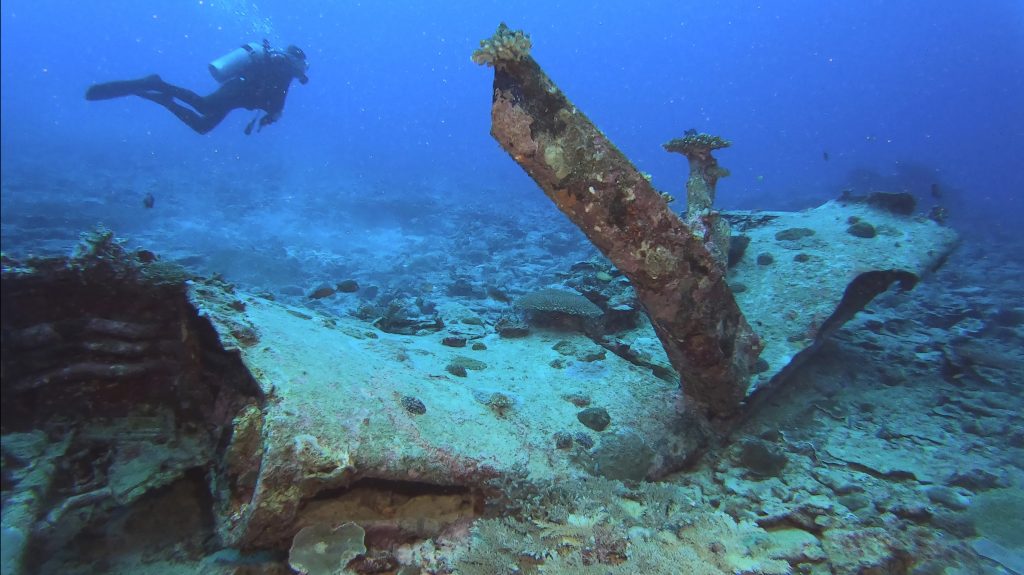 Wreckage on the ocean floor near a Japanese island must be from a fighter-bomber that crashed in 1945 with an American pilot who is still listed as missing in action, according to a World War II researcher who recently visited the crash site.

The aircraft, lying on coral reef about 70 feet down, is the same type of F4U-4 Corsair that 2nd Lt. John McGrath was flying when he crashed off Iriomote Jima in July 1945, researcher Justin Taylan said this week.

“This is the only American aircraft lost at that precise spot,” said Taylan, the founder of Pacific Wrecks, an organization that researches and catalogues WWII crashes.

McGrath, of Troy, New York, is still officially listed by the U.S. military as one of nearly 73,000 American MIAs from WWII. He was 20 when his aircraft disappeared.

Taylan explored the wreckage during a scuba dive in March, along with a Japanese man who discovered the wreck in 1987.

Both wings, the engine and other parts lie approximately 300 yards from shore, a location where American pilots said they saw the plane go down.

Although no identifying markings are visible after 74 years in sea water, the coral-encrusted wreckage clearly is from the newer version of the Corsair that McGrath’s Marine Corps aviation unit was flying at the end of the war, Taylan said.

Taylan, a former Pentagon contractor hired to research and find WWII crash sites in Papua New Guinea, became interested in McGrath’s story in 2017, when he was contacted by the son of one of the missing pilot’s old high school classmates.

After researching U.S. military records, Taylan enlisted the help of Kuentai, a Japanese group that searches WWII battlefields in the Pacific for the remains of Japanese and American servicemen.

In March, Taylan traveled to Iriomote Jima, 275 miles southwest of Okinawa. With Kuentai’s help, he met island residents who witnessed McGrath’s plane crash into the sea on July 21, 1945, during a bombing raid on Japanese defenses in the village of Sonai.

Japanese newspapers reported in 1988 that local officials and the U.S. consul general to Okinawa attended a memorial honoring remains pulled from the crash site. At the time, it was not known whose remains they were. Press coverage included a photo of the consul general standing over an American flag-draped box said to contain the remains.

Emails and phone messages requesting comment were left Thursday and Friday with officials from the Defense POW/MIA Accounting Agency, the Pentagon office tasked with recovering the nation’s missing war dead. Officials said they couldn’t immediately provide information on McGrath’s case and whether his remains were recovered.

As many families of missing veterans have, McGrath’s has provided DNA samples to the agency in the hopes of finding a match, according to one of McGrath’s nephews, Jack Law, a 74-year-old Vietnam War combat veteran and retired New York Army National Guard colonel.

“We’re aggressively bringing closure on this one way or another,” said Law. “We’re not done, but we’re close.”

While home on military leave in 1943, McGrath was photographed for the Catholic Central High School yearbook along with three other classmates who also happened to be on leave. The image shows the four uniformed men descending a staircase: Coast Guardsman Jack Marcil, Marine pilot McGrath, Navy sailor Howard McAlonie and Army soldier Alfred Mahoney.

Mahoney died in 2005. McAlonie passed away in 2014. His son Michael, who accompanied Taylan on the trip to the crash site, said his father spent his final years often thinking about his classmate lost in the Pacific.

“I think it stayed with him his whole life,” the younger McAlonie said.

Of the four servicemen in the yearbook photo, only Marcil is alive.