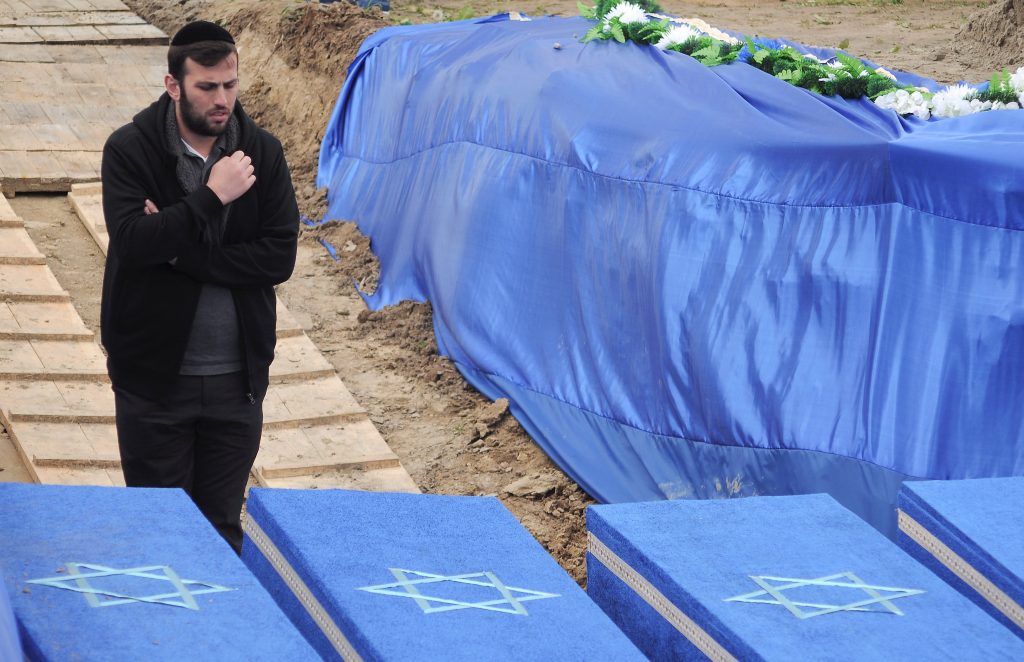 Belarus on Wednesday buried more than 1,200 Jewish Holocaust victims whose remains were unearthed this year after builders stumbled across a Nazi-era mass grave beneath a construction site in a residential area.

Soldiers were called in to the city centerof Brest on Belarus’ western border with Poland, where they exhumed the bones of 1,214 people killed during the Nazi occupation at the site of what served as a Jewish ghetto from 1941-42.

Their remains were buried on Wednesday in 120 blue caskets embossed with the star of David that were laid side-by-side and two-deep in a giant grave in a city cemetery to the north of Brest at a ceremony led by a local Jewish rabbi.

The funeral ceremony, which also featured a gun salute by Belarusian soldiers, was attended by around 300 people including Israel’s ambassador in Belarus and Jewish community members.

Attendees, some of whom closed their eyes in prayer, took turns to toss earth onto the caskets before the pit was filled in.

“The soul goes up to heaven through this process, so it was very important for the Jewish community that it was all done with Jewish custom,” said Israel’s ambassador in Belarus, Alon Shoham.

Nazi Germany occupied Belarus, then part of the Soviet Union, during World War II. Tens of thousands of its Jews were killed by the Nazis. Brest was part of Poland before the war.

The mass grave was uncovered by chance in January as builders were laying the foundations for an elite housing development, prompting an operation to exhume their remains.

Some of the skulls they found bore bulletholes, suggesting victims had been executed by a shot to the back of the head. Soldiers also found personal effects such as leather shoes that had not rotted.

“I have mixed feelings,” Jewish community member Regina Simonenko said after the funeral. She said she had been shaken by the sheer horror of the events, but that it was important that they had been remembered.

“If we don’t remember, then things like this can happen again.”