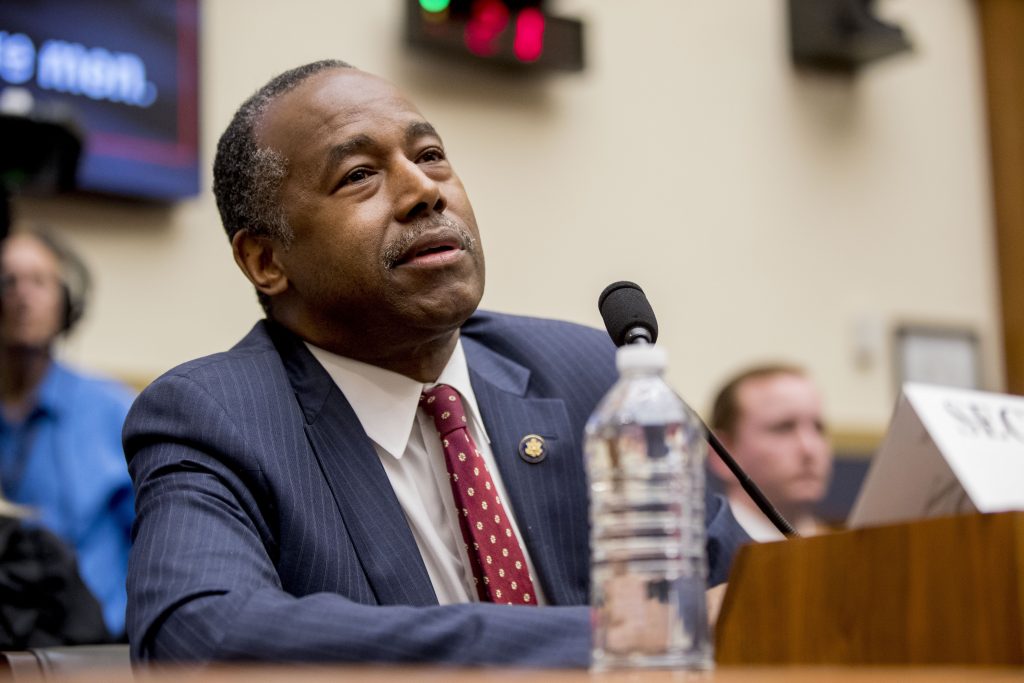 “It seems only logical that taxpaying American citizens should be taken care of first,” Carson said during a 3 1/2-hour congressional hearing on oversight of the Department of Housing and Urban Development. “It’s not that we’re cruel, mean-hearted. It’s that we are logical. This is common sense. You take care of your own first.”

Democratic lawmakers on the House Financial Services Committee expressed concern about the proposed rule. An internal agency analysis found that it could put up to 55,000 children who are legal U.S. residents or citizens at risk of eviction and homelessness.

Carson urged Congress to come to an agreement to overhaul the nation’s immigration policies rather than thwart HUD’s plan to require every family member living in subsidized housing be of “eligible immigration status.”

“If you read the rule carefully, you will see it provides a six-month deferral if they have not found another place to live,” Carson told the oversight committee. The deferral could be renewed twice, for a total of 18 months – “enough time for Congress to engage in comprehensive immigration reform.”

“Congress has a responsibility for making the laws that govern this,” Carson said. “If in fact you want to explain to the American citizens who have been on the wait list for several years . . . why we should continue to support families who are not here legally, I would be happy to join you in explaining that.”

Current rules bar illegal immigrants from receiving federal housing subsidies but allow families of mixed-immigration status to live together as long as one person – such as a child born in the United States – is eligible. Carson acknowledged that illegal-immigrant parents do not get housing subsidies. HUD-subsidized rent is prorated to cover only eligible residents.

But, he wondered, “How do you prorate a roof over somebody’s head?” “The concept of prorating makes no sense in this context,” Carson said. “I call it giving aid and assistance to people who are here illegally.”

Democrats are considering legislation to block the proposal.

HUD’s analysis of the proposal, pushed by White House senior policy adviser Stephen Miller, found that the new rule would displace more than 55,000 children who are legal U.S. residents or citizens.

The HUD analysis, written by career staffers, concluded that the proposal would reduce the number of families being served – contrary to the Trump administration’s stated goal of moving more families off the years-long waiting lists for housing assistance.

“Mr. Secretary, the “D” in HUD does not stand for deportation,” said Rep. Carolyn Maloney, D-N.Y., adding that affordable housing for Americans should not come as a result of “throwing other Americans out into the street.”

Carson told a Democratic senator last week that the motivation behind the Trump administration’s plan to inventory all immigrants living in public housing is to build pressure on Congress to pass comprehensive immigration reform and pointed out that no one will actually be evicted for 18 months, according to the senator who spoke on the condition of anonymity to relay a private conversation. When the senator responded that President Trump is unlikely to sign a comprehensive immigration plan, Carson replied, “The thinking on that may be changing.”