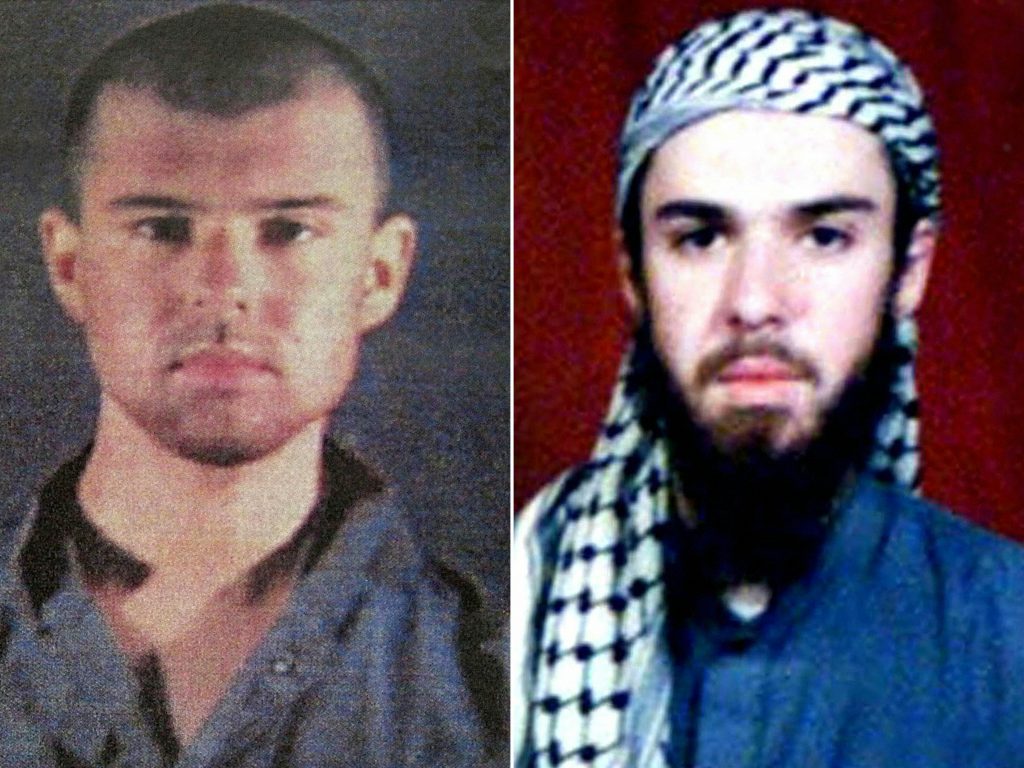 John Walker Lindh’s eyes, dark and wild, were ubiquitous across magazine covers and cable news channels, alongside terrorists in Afghanistan, after he was captured in November 2001. He was a long-haired guerrilla with a California address – a traitor to some, a misguided kid sucked into Islamic jihad to others.

Dubbed the “American Taliban,” Lindh was sentenced to 20 years in prison after pleading guilty to supporting terrorists who harbored al-Qaida as it planned the attacks of Sept. 11, 2001. But in a surprise move to some, Lindh will be released from federal prison on Thursday, three years early, federal officials said.

Lindh and other incarcerated American supporters of Islamic terrorists present a quandary with growing urgency: Is the United States prepared to try to rehabilitate extremists and foreign fighters, and welcome them back into society?

“There is very close to nothing in terms of de-radicalizing programs at the federal level,” said Bennett Clifford, a research fellow at George Washington University’s Program on Extremism. “The current model is hoping long prison sentences for material support of terrorism will be a deterrent.”

The Federal Bureau of Prisons is stymied by budget constraints, a sprawling corrections bureaucracy and a top-down approach that focuses on traditional rehabilitation, such as turning away prisoners from gang activity or drugs, Clifford told The Washington Post.

About 500 federal prisoners been sentenced for terrorism-related crimes, and about a fifth will be released within five years, 62 of them U.S. citizens, researcher Kevin D. Lowry wrote in the Journal for Deradicalization in 2018.

Federal officials have signaled interest in expanding recidivism-prevention and reintegration efforts, although it amounted to one paragraph in the White House’s 2018 counterterrorism strategy and focused on radicalization in prison.

There are some breakthroughs. The U.S. District Court for Minnesota, which has had an influx of Islamist terrorism suspects, has pioneered efforts to focus on deradicalization from extremist beliefs, efforts that include civic education, family involvement and mental health counseling for inmates, Lowry wrote.

Those models were adapted from European programs and include efforts to combat white-supremacist beliefs. But there is no similar national program within federal prisons, Lowry noted.

Lindh will be monitored for three years by federal probation officials, the Bureau of Prisons said.

His early release is opposed by Sens. Richard Shelby, R-Ala., and Maggie Hassan, D-N.H., who wrote a letter Friday to the Federal Bureau of Prisons requesting details about agency efforts to prevent recidivism from terrorists released from its facilities.

“We must consider the security and safety implications for our citizens and communities who will receive individuals like John Walker Lindh, who continue to openly call for extremist violence,” the letter reads.

Bill Cummings, an attorney for Lindh, did not respond to a request for comment.

The lawmakers asked for information about other convicted “terrorist offenders” who may be released from federal prison in coming years, and they inquired about the steps prisons take to determine whether someone is an “ongoing public threat.”

Th Bureau of Prisons said in a statement that it “participates in national and international efforts to identify new programs and approaches tailored to reduce the risk terrorist offenders pose inside and outside of prisons.”

Lindh, who was raised in California and Maryland, converted to Islam, met Osama bin Laden and joined the Taliban in Afghanistan before the Sept. 11 attacks, although his attorneys maintained that the attacks soured his outlook. They point to the dropping of terrorism charges as the government’s acknowledgment that he did not want to kill Americans. Lindh avoided a life sentence with that plea deal.

Last month, Shelby invoked the death of CIA officer Johnny Micheal “Mike” Spann, who interrogated Lindh at a prison near Mazar-e Sharif in northern Afghanistan after his capture. Spann was shot and killed in a revolt by prisoners later that day, and Spann’s father has repeatedly accused Lindh of playing a role in his son’s death by not alerting Spann and others of the revolt.

“He’s as much responsible for Mike’s death as the people who beat him and shot him,” Johnny Spann told AL.com. Lindh has maintained he was surprised by the revolt. U.S. District Court Judge T.S. Ellis III, who ordered Lindh’s sentence, said there was no evidence that linked Lindh to Spann’s death.

Hundreds of prisoners died in the days-long fight, and Lindh was one of the survivors.

In April, Shelby said President Donald Trump agreed that Lindh should serve the remainder of his sentence, though it is unclear if the president could wield any influence in the process. The White House did not reply to a request for comment Friday about the reported conversation and Trump’s thoughts about Lindh’s imminent release.

Lindh remains in custody at the Terre Haute Federal Correctional Institution in Indiana. Inmates can earn early release through good conduct and previous time served in custody, the Bureau of Prisons said. Credits for good behavior can reduce an inmate’s sentence by up to 15 percent, which in Lindh’s case, would amount to three years.

Federal officials requested numerous conditions for Lindh’s release, according to court filings. He will need permission to acquire Internet-capable devices, which would be monitored “continuously.” Lindh was ordered to undergo mental health counseling and will not be allowed to communicate online in any language other than English without approval.

He is also barred from having a passport, communicating with known extremists or accessing material that reflects “extremist or terroristic views,” according to the documents. Lindh initially objected to those conditions but agreed to comply in late March after consulting with an attorney.

Most of those conditions are routine, Clifford said, although the language restriction appeared unusual for felons such as Lindh.

Lindh has expressed remorse for his crimes. He tearfully told the judge during his 2002 sentencing: “I have never supported terrorism in any form, and I never will. . . . I made a mistake by joining the Taliban,” he said at the time. “Had I realized then what I know now, I would never have joined them.”

In 2017, an investigation by Foreign Policy magazine painted a different picture. It cited documents obtained that year from the National Counterterrorism Center, which said that as of May 2016, Lindh “continued to advocate for global jihad and to write and translate violent extremist texts.” The center also wrote that Lindh “told a TV news producer that he would continue to spread violent extremist Islam upon his release.”

The report, which Shelby and Hassan cited in their letter, notes that there is no record of Lindh participating in media interviews.

In the documents, the National Counterterrorism Center said “homegrown violent extremists” like Lindh were likely to “reengage in terrorist activity” after being released from prison – an assertion that Clifford doubts.

“There is not much data of recidivism [of terrorism suspects] in the United States because it’s a new problem,” he said.

Joshua Dratel, a lawyer who has defended suspected and convicted terrorists, told The Post that Shelby and Hassan were overreacting to Lindh’s early release. He called their letter “a solution in search of a problem” and likened it to fearmongering.

“Beyond John Walker Lindh, anyone whose offense involved actual violence is not getting out soon,” Dratel said. “In a certain sense, saying, ‘Dangerous terrorists are going to be out there’ is not true. These people were sentenced accordingly by judges.”