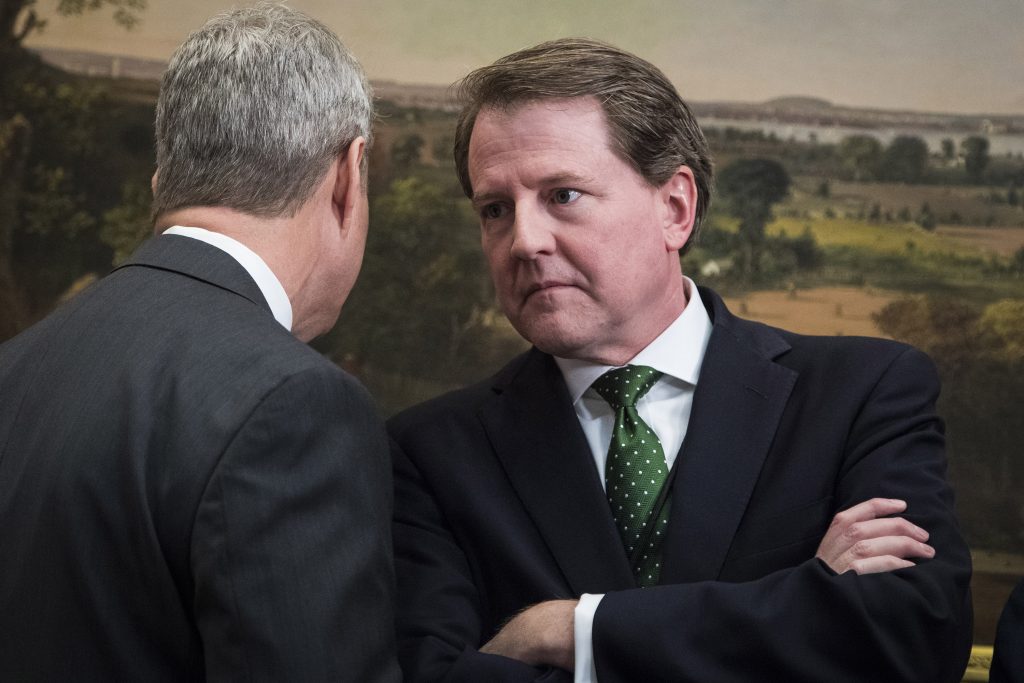 The White House on Monday blocked former counsel Donald McGahn from testifying to Congress, the latest act of defiance in the ongoing war between House Democrats and President Donald Trump.

McGahn, who Democrats hoped would become a star witness in their investigation into whether Trump obstructed justice, was subpoenaed to testify on Tuesday morning. The former White House counsel was a key witness in several instances of potential obstruction detailed in Special Counsel Robert Mueller’s report.

“The Department of Justice has provided a legal opinion stating that, based on long-standing, bipartisan, and constitutional precedent, the former counsel to the president cannot be forced to give such testimony, and Mr. McGahn has been directed to act accordingly,” said White House press secretary Sarah Sanders in a statement. “This action has been taken in order to ensure that future presidents can effectively execute the responsibilities of the office of the presidency.”

In a summary from the Office of Legal Counsel, the Justice Department argued that the immunity of the president’s immediate advisers from compelled congressional testimony is long-standing and is based on the “fundamental working of the separation of powers.”

The department said McGahn is “not legally required to appear and testify” about matters related to his past role as counsel to Trump.

The move to bar McGahn from answering lawmakers’ questions is certain to anger House Democrats already eager to hit back at what they view as White House stonewalling. The defiance raises the possibility that the House will hold McGahn in contempt of Congress, as House Judiciary Committee Chairman Jerrold Nadler (D-N.Y.) has threatened.

An increasing number of frustrated Democrats also want to begin impeachment proceedings against Trump even though House Speaker Nancy Pelosi (D-Calif.) last week privately downplayed the possibility and encouraged her members to focus on their policy agenda.

Some Democrats believe opening an impeachment inquiry will strengthen their hand in trying to force the White House to comply with document requests and witness testimony, including McGahn’s.

House Democrats were hoping to make McGahn their key witness as they seek to unpack the findings of the Mueller report – particularly regarding questions of whether Trump obstructed justice. Trump and his administration have thwarted multiple House probes into the report, the president’s businesses and efforts to obtain his tax returns, frustrating Democrats who said they are trying to conduct oversight.

McGahn emerged as a central player in Mueller’s findings, a senior confidante who documented in real-time Trump’s rage against the Russia investigation and efforts to shut it down. Democrats wanted him to testify for a national audience about the two episodes in which Mueller found McGahn was a critical witness and in which investigators say they have substantial evidence Trump was engaged in obstruction of justice that would normally warrant criminal charges.

In mid-June of 2017, Trump tried to pressure McGahn to intervene with the Justice Department to try to push for Mueller’s removal from office based on alleged conflicts of interest, the report said. Then, in February 2018, Trump summoned McGahn to the Oval Office and urged him to deny a news account that suggested the president asked for his help in ousting Mueller.

The McGahn news was not surprising. Earlier this month, the White House invoked executive privilege to bar McGahn from complying with a congressional subpoena to provide documents to Congress related to Mueller’s investigation, though the White House never officially filed the paperwork to assert the White House secrecy prerogative.

In a letter to the House Judiciary Committee earlier this month, White House counsel Pat Cipollone said McGahn does not have the legal right to comply with its subpoena for 36 types of documents – most related to Mueller’s nearly two-year probe of Russian interference in the 2016 election. Rather, Cipollone argued the committee needed to send the request to the White House – and even hinted the administration would assert privilege to block the information.

“The White House provided these records to Mr. McGahn in connection with its cooperation with the special counsel’s investigation and with the clear understanding that the records remain subject to the control of the White House for all purposes,” Cipollone wrote earlier this month. “The White House records remain legally protected from disclosure under long-standing constitutional principles, because they implicate significant executive branch confidentiality interests and executive privilege.”