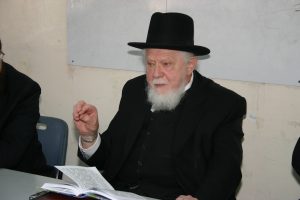 Bais Yaakov High School of Toronto is joined by the Toronto Jewish community in mourning the passing of Rabbi Akiva Stefansky, z”l, one of the builders of the school and the community, who was niftar on Thursday, 11 Iyar/May 16, at age 93.

Rabbi Stefansky, one of the city elders, was involved in nurturing the Bais Yaakov High School of Toronto for over fifty years, as he transformed the school and the community at large into a refuge of Torah. The fortitude with which he built developed the school, encouraging the students to seek spouses who were bnei Torah and would continue their pursuit of Torah by starting their married lives in kollel, helped create an elevated spirit of learning which affected the entire city.

In line with his desire to infuse his students with the desire to marry bnei Torah and lead Torah lives, he invited several well-known teachers from Eretz Yisrael to join the staff, and for many decades he taught alongside them as they uplifted the goals and aspirations of their students. As the quantity increased to over 300 students, the quality of the talmidos rose as well, and is on par with the best schools in North America.

Besides for his position at the helm, Rabbi Stefansky taught yahadus, and until recently he continued to teach this subject to his eager students.

In addition to his dedicated efforts on behalf of the school, Rabbi Stefansky took a leading role in the establishment of the Kollel Avreichim of Toronto in 1970, under the leadership of Harav Shlomo Miller, shlita and Harav Yaakov Hirschman, shlita. Possessing the vision of how a kollel would change the landscape of the city, he convinced the baale batim of the need, and helped organize its founding. For many years, Rabbi Stefansky would walk the long distance from his home in order to daven in the kollel.

Rabbi Stefansky merited to have relationships with many gedolim, who held him in high esteem.