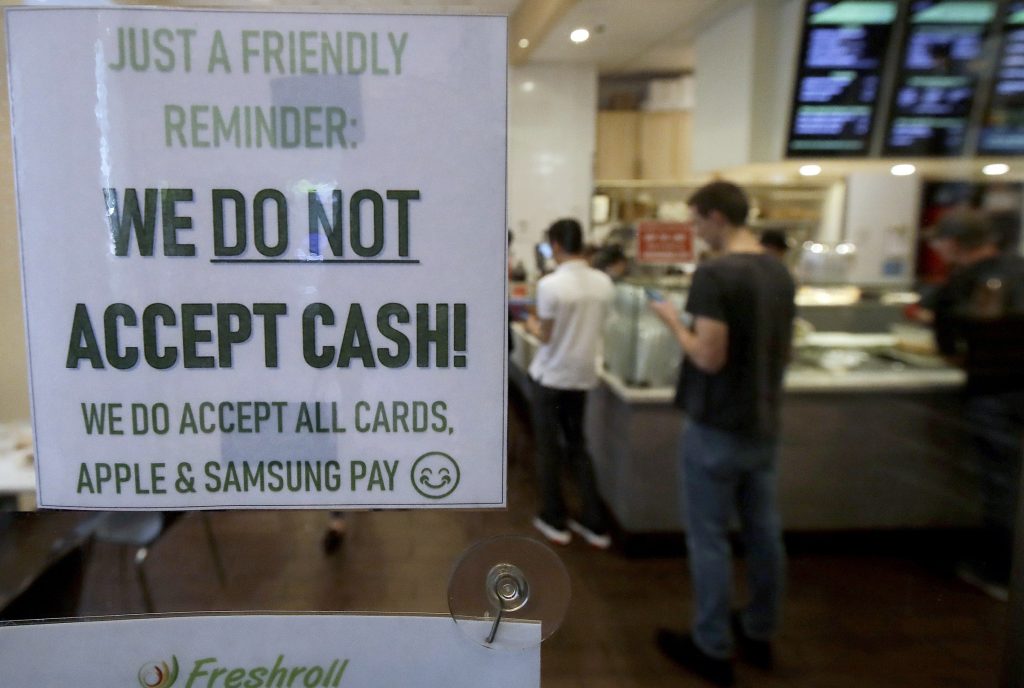 Months after Philadelphia and New Jersey passed laws requiring retailers to take cash, lawmakers in Congress are seeking to ban cashless stores across the country.

U.S. Reps. Donald Payne (D-N.J.) and David Cicilline (D-R.I.) introduced competing bills last week that would force brick-and-mortar retailers to accept cash. Both bills would exclude online transactions and those done over the phone, though the proposals differ over who would enforce such a law.

“The Payment Choice Act was informed by what’s going on in New Jersey, Philadelphia, New York, Chicago and elsewhere,” Payne said in a statement, referring to bills that have been introduced in other cities. “There is a movement underway across the country to ensure our increasingly technological world does not lock out low-income, minority, and immigrant populations. This bill is part of that movement. We have to ensure that technological convenience for some doesn’t mean economic hardship for others.”

The federal proposal comes after local lawmakers successfully banned cashless stores in Philly — the nation’s poorest large city — and New Jersey despite criticism from businesses groups, which saw it as unnecessary government interference. Often, businesses say they go cashless to reduce the risk of being robbed and to avoid the hassle of handling cash.

In February, Philadelphia became the first major U.S. city to force shops to take cash after Mayor Jim Kenney signed off on a law that takes effect in July. New Jersey followed in March, when Gov. Phil Murphy enacted a law immediately banning cashless stores across the state. San Francisco passed a pro-cash law in May.

The Congressional bill introduced by Payne resembles the Philadelphia law as it would not only bar stores from refusing to take cash, but also prevent stores from charging cash-paying customers a higher price. His bill would allow consumers to sue stores that won’t take cash, with violators subject to fines of $2,500 for a first offense and $5,000 for subsequent violations. The legislation would let attorneys general to intervene in civil cases brought against companies.

By contrast, Cicilline’s legislation, called the Cash Always Should be Honored (CASH) Act, would make the Federal Trade Commission enforce the cash requirement. It would let the agency craft regulations to implement the proposed law, with violators subject to unspecified penalties.

Unlike the Philadelphia and New Jersey laws, neither federal bill would carve out specific businesses. For example, Philadelphia exempted parking lots, garages, and wholesale clubs, among others, while the New Jersey law carves out car rental companies and retailers inside airports.

As technology gives consumers more ways to pay, including through smartphones, some stores have gone cashless to improve efficiency, avoid handling cash, and reduce the risk of robbery.

But consumer advocates argue that cashless stores effectively discriminate against poor consumers who do not have access to credit or bank accounts. Nearly 6 percent of the Philadelphia region was unbanked in 2017 and roughly 22 percent was considered “underbanked,” according to the Federal Deposit Insurance Corp.

“It’s an issue of fairness for working families,” said Cicilline spokesman Richard Luchette. “(Cicilline) had heard from constituents who ran into the problem, (a quarter of) people don’t use credit cards, and many don’t have bank accounts. This is about delivering results for working people.”

Businesses have largely pushed back on the cashless bans, arguing store owners should have the choice on how to run their businesses. But some companies do support keeping cash king. Cardtronics, which bills itself as the world’s largest ATM operator, lobbied for the Philadelphia and New Jersey laws, and backs the federal bills too.

“Let’s not forget that many unbanked or underbanked Americans only have one option in their wallet and that’s cash,” Cardtronics spokesperson Crystal Wright said in a statement.

Americans are less reliant on paper bills and coins, according to a Pew Research Center survey released in December. The survey of 10,683 U.S. adults found that 29% said they made no purchases using cash during a typical week, up from 24% in 2015. Likewise, those who made all or almost all of their weekly purchases with cash dropped from 24% in 2015 to 18% today.

Massachusetts was the first state to pass a law requiring retailers to accept cash, in 1978.

Some economists have questioned the approach of banning cashless stores. Kenneth Rogoff, a Harvard economics professor has said the government should play a role in regulating the transition to a more cashless economy, but called the cash mandates “a very heavy-handed intervention.”