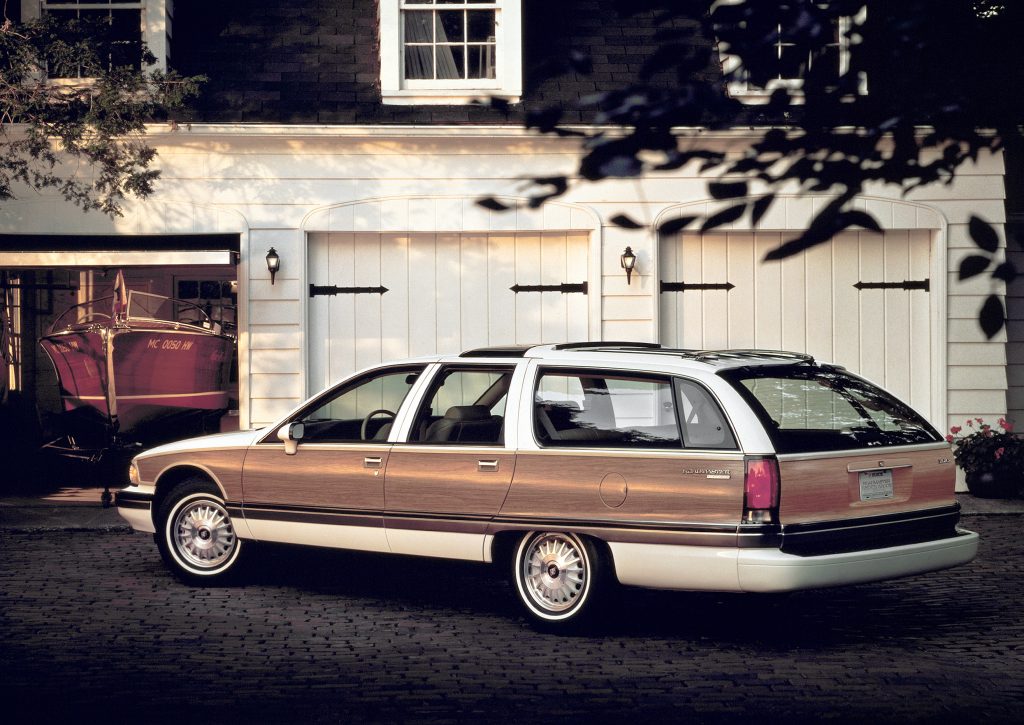 There’s a way to get a Corvette inside a station wagon. Just buy a Buick Roadmaster Estate wagon.

You remember them. These are the long, eight-passenger, wooden-sided wagons that General Motors Co. produced from 1991 to 1996. They were the reimagined versions of the angular “estate” cars (precursors to what we’d call station wagons) that Buick made in the late 1970s and, before that, in the ’50s and early ’60s. Supersized and all-American, the cars were used by families on summer road trips and camping expeditions. Like the older station wagons, the ’90s-era ones were so lengthy they might as well have been powerboats, but they added such finery as sunroofs, climate control, and those signature, simulated wood-grain sides.

Although they reached a period of post-ironic disdain rather quickly, the cars have become something of a hot item lately. The third-generation edition of the Buick Roadmaster line, made from 1994 to 1996, is especially coveted. That one packs the same 5.7-liter LT1 V8 engine that GM also put into its Corvette. At 260 horsepower and with a top speed limited to 108 miles per hour, the wagon’s engine had been detuned to produce less power than the 300-horsepower Corvette, but that didn’t hampered enthusiasm for it then nor has it now.

In fact, it makes the later Buick Roadmaster Estate a great option for those who want to buy a modern classic that’s reliable, unique, practical, and affordable. Throw it in the garage at your country house, or at the cabin, and you have a summer whip with plenty of room for fishing, camping, and canoeing gear, even for the family dog. To really embrace its dorky persona, though, you’d have had to leave your ego at the door. This was the UR “dadmobile” of its day.

When GM first debuted the car in 1991, it sold only 7,300 Roadmaster Estates; it discontinued them only five years later. (Their dwindling sales illustrated in real time the growing consumer fascination with some novel truck-like things called sport utility vehicles. That, and the rise of minivans, sealed the near-death knell for wagons in the U.S.)

Since then, however, leftover Roadmaster wagons have developed somewhat of a cult status.

There’s data to confirm the resurgence. Hagerty featured them prominently in its Investment Guide for 2019, calling them “the AMC Pacer of the 1990s” and saying “there’s nowhere for them to go but up.” (The Pacer refers to an example of the type of car that was mocked when it debuted but decades later has developed a groundswell of approval, leading to attention and sales.) The Michigan-based insurance company reported 50% growth in the number of insurance quotes requested for the homely wagons from 2017 to 2018. The number of insurance quotes requested leads the overall market by 14 percentage points, more inquiries than for classic Mercedes.

“It’s a fun way to stand out for not a whole lot of money,” says Jonathan Klinger, a spokesman for Hagerty. “It’s like driving a couch down the road: Big comfy seats that lack any sort of real driver-oriented support, but they’re just cushy and comfortable. And with the V-8 engine, it’s got a little bit of sleeper status to it.” If anything, he said, the cars stand to slowly gain in value.

Indeed. While lethargic in appearance, heavy in body (4,700 pounds), and less-than mind-bending in their cornering capabilities, the Roadmaster Estate wagons have endeared true enthusiasts with their unique, if unusual, looks, mechanical simplicity, availability of replacement parts, and Old Faithful-like reliability. Most came with plush, stitched seats, thin steering wheels, wooden veneers throughout, and a rear rumble seat facing backwards.

Did I mention they’re cheap? I mean, really cheap.

Motivated buyers can find excellent examples for much cheaper prices, like this 1994 Roadmaster that sold for $9,400 last year on Bring a Trailer, or this 1996 version that sold for half that a year earlier. Kelley Blue Book lists typical mileage for a 1994 Buick Roadmaster Estate at 132,523 total miles. The current average listing price on KBB is $2,990.

That number is slowly rising, according to Hagerty data. The average auction price for LT1-engined Roadmasters increased from $3,995 in 2017 to $5,775 in 2018. So buy yours now: one that doesn’t show rust underneath the chassis and the absolute best example you can afford.

It’ll pay off. Even if you don’t use it at the lake, modification potential to soup up that Corvette engine abounds. Then you’ll have a real sleeper on your hands.