Netanyahu’s Problem: No One Wants to Be First to Sign, Report Says 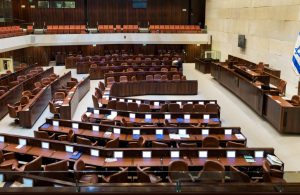 Prime Minister Binyamin Netanyahu on Monday was granted a two-week extension to form a government by President Reuven Rivlin, but negotiations have been stalled, Likud insiders told Yediot Acharonot â€“ because no party wants to sign a coalition agreement without knowing what the other partners are â€śgetting.â€ť

The most extreme example of this is Yisrael Beytenu, whose head, Avigdor Liberman, has made it clear that he will not join the coalition until he sees what Netanyahu has promised the chareidi parties. Liberman accused those parties of â€śprovoking and threateningâ€ť instead of negotiating â€śseriously. Over the past two days I have heard endless threats from chareidi MKs that they will go to new elections or try to form a government without us,â€ť he wrote in a social media post. â€śOur position on matters of religion and state are clear. We are in favor of a Jewish state, and opposed to a halachic state.â€ť

If Prime Minister Binyamin Netanyahu tries to form a government without Yisrael Beytenu â€“ as has been rumored â€“ his party would vote against it, Liberman said, but with that, his party will not support any other candidate for prime minister. â€śTake us seriously. Those who will be looking for someone to blame if we do not establish a right-wing government should look in the mirror, not at us.â€ť

Chareidi MKs feel the same way. Yediot Acharonot quoted a senior source in United Torah Judaism as saying that they were in no hurry to close a deal. â€śWe will not sign until we know what Netanyahu promised Liberman and how it will affect us.â€ť The same applies to Moshe Kahlon’s Kulanu, the report said; Kahlon expects to be named finance minister again, and as such wants to know how much the coalition promises Netanyahu is making to his partners will end up costing.

Also in no hurry is the United Right List. MK Betzalel Smotrich, the party’s number two, is still insisting that he be named justice minister, and that his party will not enter the coalition without that portfolio. Smotrich has been consulting with senior officials, including, the report said, outgoing ministers Naftali Bennett and Ayelet Shaked, who told Smotrich he had a better chance of achieving his goal if he waited until the last minute.

While Netanyahu and the Likud are working hard to form a government, analysts said that if one was not formed and new elections were called, it would be the Likud that would benefit from the process. â€śObviously we would want to avoid a new election because it is expensive, but in a new round of campaigning Netanyahu would appeal to voters of right-wing parties by saying that the coalition system is broken, and the surest way to a right-wing government is to vote for the Likud. It’s likely that that message would resonate with many voters.â€ť

Click â€śRenew Subscriptionâ€ť below to begin the process of renewing your subscription.

Enter your email address, and weâ€™ll send you a password reset link.