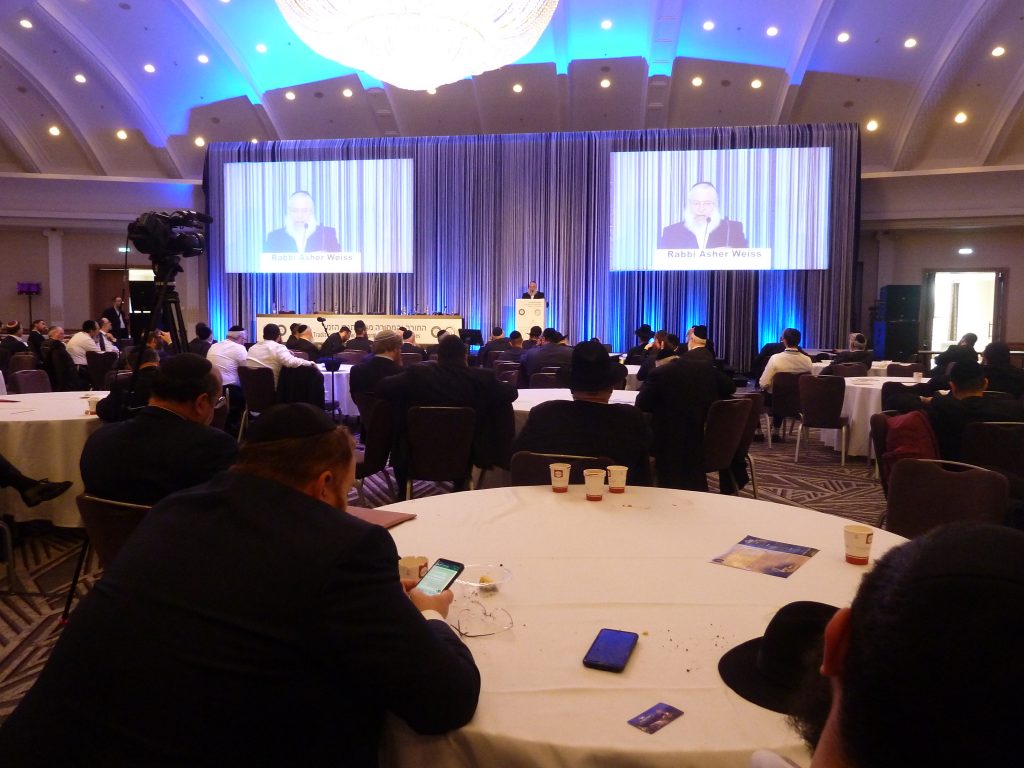 Just ten days before Europeans start voting in the European Parliamentary Elections, the biennial convention of the Conference of European Rabbis (CER) took place in Antwerp, Belgium, from Monday until Wednesday of this week.

This 31st conference was outstanding in the caliber of its speakers and also the number of participants. With over 600 registered attendees, amongst them 250 Rabbanim, Dayanim and chief rabbis from 35 countries, this conference has been the widest attended to date.

The opening day of the conference began with addresses by the two Chief Rabbis of Israel, the Rishon LeTzion, Harav Yitzhak Yosef and the Ashkenazi Chief Rabbi, Harav Dovid Lau, both giving their words of support to Europe’s Jewish communities. At a gala dinner, Elan S. Carr, United States Special Envoy to Monitor and Combat anti-Semitism, spoke about how bans on religious slaughter were tantamount to the “forced expulsion” of the Jewish community.

On the second day, further discussions of political developments related to the European Jewish community were held. In a panel discussion concerning freedom of religious expression in Europe, Ms. Katharina von Schnurbein, Special Coordinator for Combating Antisemitism for the European Commission, voiced her concerns regarding anti-Semitic trends in European political discourse, emphasizing that anti-Semitism in Europe is not only a threat to the Jews but to the entire edifice of democracy in Europe. Focusing on shechitah and bris milah, Mr. Markus Grubel, a member of the German Parliament and German Federal Commissioner for Religious Freedom, emphasized the need to protect freedom of religious expression. Also on the panel were U.K. Chief Rabbi Ephraim Mirvis and Shimon Cohen, Shechita UK’s campaign director, who offered observations and suggestions from their extensive experience in the field. The session was chaired by CER’s President, Chief Rabbi Pinchas Goldschmidt.

Additional sessions focused on the alarming centralization of Far-Right voices in European politics, alongside explorations and workshops regarding methods of maintaining and enriching European Jewish identities delivered by international experts.

Shiurim were presented on topical halachic issues by outstanding rabbinic figures such as Harav Dovid Cohen, Rosh Yeshivah of Chevron and Harav Asher Weiss, Gaavad Darchei Hora’ah, among other Torah personalities of international acclaim. These discussions explored central contemporary topics such as conversion; the implications for kashrus of recent developments in the food industry and medical ethics and halachah. Rav Weiss, in characteristic clarity, focused on appropriate perspectives for pre-natal care and the importance of children’s vaccination.

The convention was not only important for the content of its sessions, however. Rabbanim from across Europe had the opportunity to share experiences, strategies and challenges that face them in their home communities. Workshops were held which explored alternative visions and methods for community development and many took part in specialized focus-groups, such as an exclusive session for Rabbanim of the United Synagogue. Although the vast majority of rabbinic delegates were from European communities, a number of Rabbis from small communities in other countries, most notably Japan, also took part in the event.

The rabbinic conference in Belgium takes place just a few months after the Belgian federal regions’ ban on shechitah came into force.