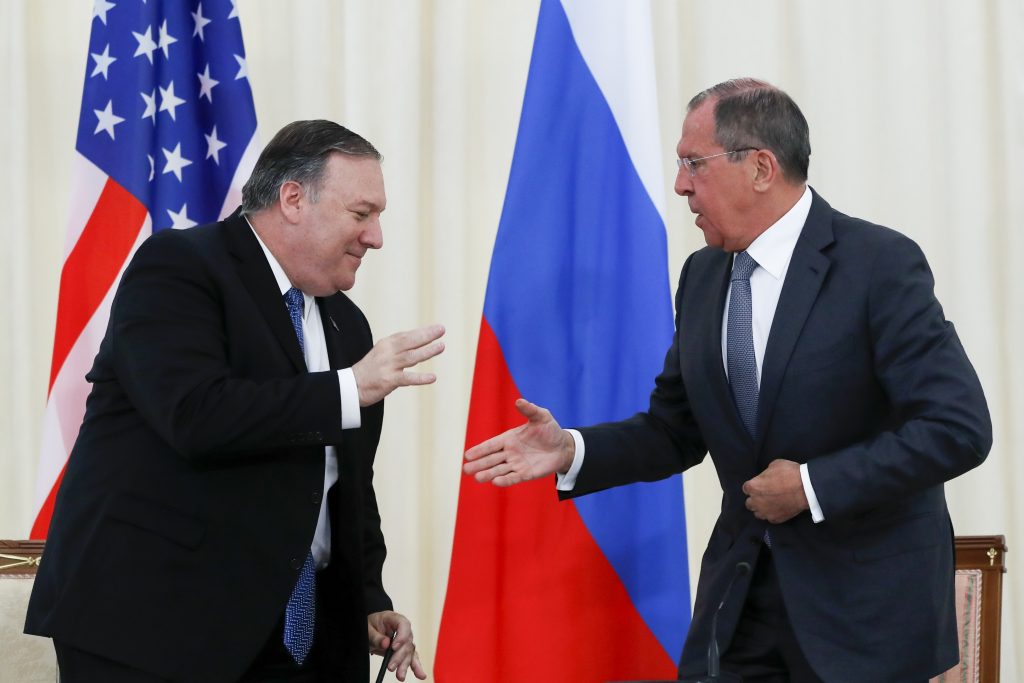 Visiting Russia for the first time as secretary of state, Pompeo publicly clashed with Lavrov on issues from Ukraine to Venezuela. After their meeting, both men said they had been far apart on many issues.

“I made clear to Foreign Minister Lavrov… that interference in American elections is unacceptable. If the Russians were engaged in that in 2020 it would put our relationship in an even worse place than it has been,” he said.

“I’d encourage them not to do that. We would not tolerate that.”

However, both men said they shared a desire to improve battered ties despite not being able to confirm a suggestion by U.S. President Donald Trump that he would meet Russian President Vladimir Putin on the sidelines of a meeting of the G20 in Japan next month.

“The United States stands ready to find common ground with Russia as long as the two of us can engage seriously on those issues,” Pompeo said.

“President Trump has made clear that his expectation is that we will have an improved relationship between our two countries. This will benefit each of our peoples. And I think that our talks here today were a good step in that direction.”

Relations have long been strained by allegations – denied by Moscow – that Russia tried to influence the results of the 2016 U.S. presidential election.

Pompeo’s visit followed the publication of a long-awaited report by U.S. Special Counsel Robert Mueller into the nature of Russia’s role in that election.

Russian officials had expressed hope beforehand that Washington would now have more scope to improve ties.

But though Pompeo and Lavrov made some positive remarks about the potential for cooperation on nuclear arms control, Pompeo listed a large number of U.S. complaints about Russia.

As well as the issue of interference in U.S. elections, the two men also clashed over Venezuela, with Lavrov sharply criticizing Washington for trying to undermine President Nicolás Maduro, who Pompeo said must now step down in the face of economic crisis and large-scale protests against his rule.

On Ukraine, Pompeo told Lavrov the United States would not recognize Moscow’s 2014 annexation of Crimea and would keep in place economic sanctions imposed on Russia over that move.

Russia should now work with Ukraine’s new president-elect to bring peace to eastern Ukraine, said Pompeo, adding that he wanted Moscow to free a group of captured Ukrainian sailors.

Pompeo said he had also complained to Lavrov about U.S. citizens being detained in Russia, a reference to the case of Paul Whelan, a former marine accused of espionage, and Michael Calvey, an investor accused of fraud. Both men deny wrongdoing.

Lavrov told reporters the two countries continued to disagree about Iran’s nuclear program and the international community’s approach to Tehran, while Pompeo said he had raised U.S. concerns about escalating fighting in Syria’s Idlib.

Pompeo was due to meet Putin later on Tuesday for talks.