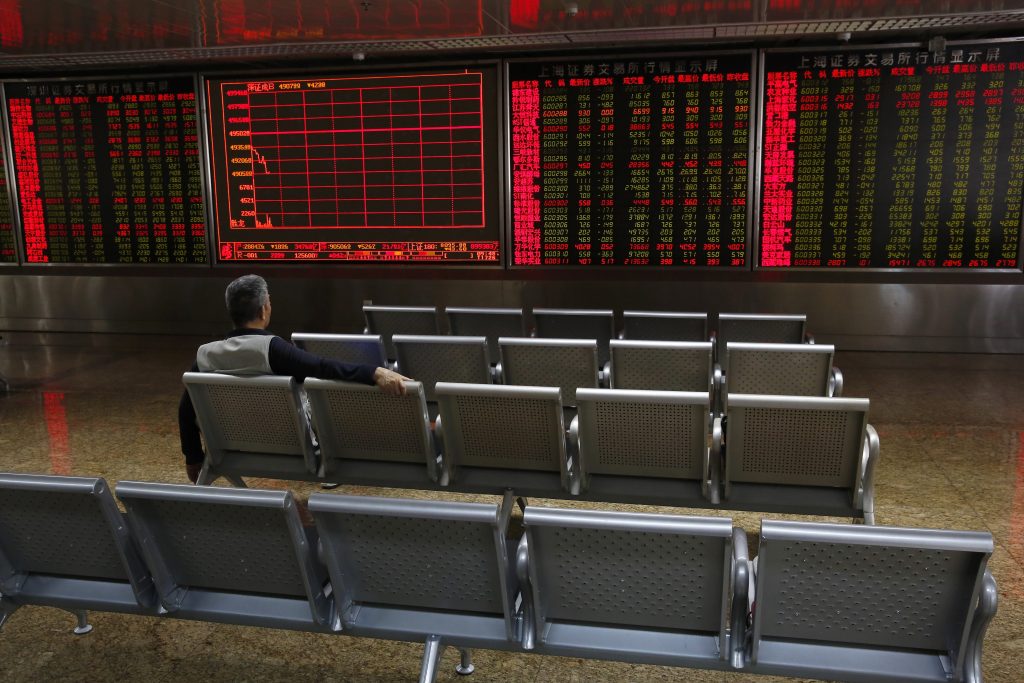 Fresh volleys in the U.S.-China tariff war pressured Asian shares on Tuesday, but comments from President Donald Trump that he expects trade negotiations to be successful eased some worries.

Chinese markets that were pummeled in early trade swung in and out of the red amid signs of state support, but ended the day lower.

Late on Monday, Trump said trade talks with China are “going to be very successful.” That helped lift U.S. stock futures, which had been down, to be more than 0.4% up, though sentiment remained fragile.

China on Monday announced it would impose higher tariffs on $60 billion of U.S. goods following Washington’s decision last week to hike its own levies on $200 billion in Chinese imports.

MSCI’s broadest index of Asia-Pacific shares outside Japan was down 1.1% on Tuesday afternoon. The index had earlier fallen as much as 1.25% to its lowest since Jan. 30.

Prakash Sakpal, Asia economist at ING in Singapore, said the current volatility showed how a “180-degree” turn in U.S. rhetoric on trade negotiations had spooked markets.

“We don’t see any quick end to this state of the markets until we see some resolution, constructive dialogue and something very solid in terms of deals. But the hopes for that are a bit misplaced currently,” he said.

“Politicians may be willing to focus less on the market impact until things get more severe, making it doubtful there will be an early resolution to the current breakdown in negotiations simply based on market moves,” said Kerry Craig, global market strategist at J.P. Morgan Asset Management.

“Furthermore, as there isn’t a clear schedule for meetings between Chinese and U.S. negotiators, markets are likely to be more volatile.”

The U.S. Trade Representative’s office on Monday said it planned to hold a public hearing next month on the possibility of imposing duties of up to 25% on a further $300 billion worth of imports from China.

The tariff escalation has rattled global markets, even as Trump said he would meet with Chinese President Xi Jinping next month.

Underscoring market concerns over the economic impact of the trade war, 10-year yields once again ticked below those on three-month Treasury bills. A sustained inversion of this part of the yield curve has preceded every U.S. recession in the past 50 years.

On Monday, some traders were concerned that China, the largest foreign U.S. creditor, could dump Treasuries to counter the Trump administration’s hardening trade stance. But most analysts downplayed such a possibility.

“If China did start [to sell Treasuries] it will galvanize both sides of politics in the U.S. against China, and the Fed would be sent into the market to buy bonds,” Greg McKenna, strategist at McKenna Macro said in a note to clients.

“That would expand its balance sheet but it would allow it to neutralize China’s efforts to disturb U.S. financial markets. So I doubt they’ll try to sell Treasuries.”

After earlier falling against the yen, the dollar strengthened 0.31% against the Japanese currency to 109.64 .

The single currency was up less than 0.1% on the day at $1.229, while the dollar index, which tracks the greenback against a basket of six major rivals, was mostly unchanged at 97.311.

Its onshore counterpart strengthened slightly to 6.8767 per dollar after touching four-month lows on Monday, sparking speculation that China’s central bank may be letting the currency weaken amid the intensifying trade war.

Oil prices edged higher, buoyed by Middle East tensions though gains were checked by trade war concerns. Saudi Arabia said two of its oil tankers were among those attacked off the coast of the United Arab Emirates, describing it as an attempt to undermine security of supply amid United States-Iran tensions.