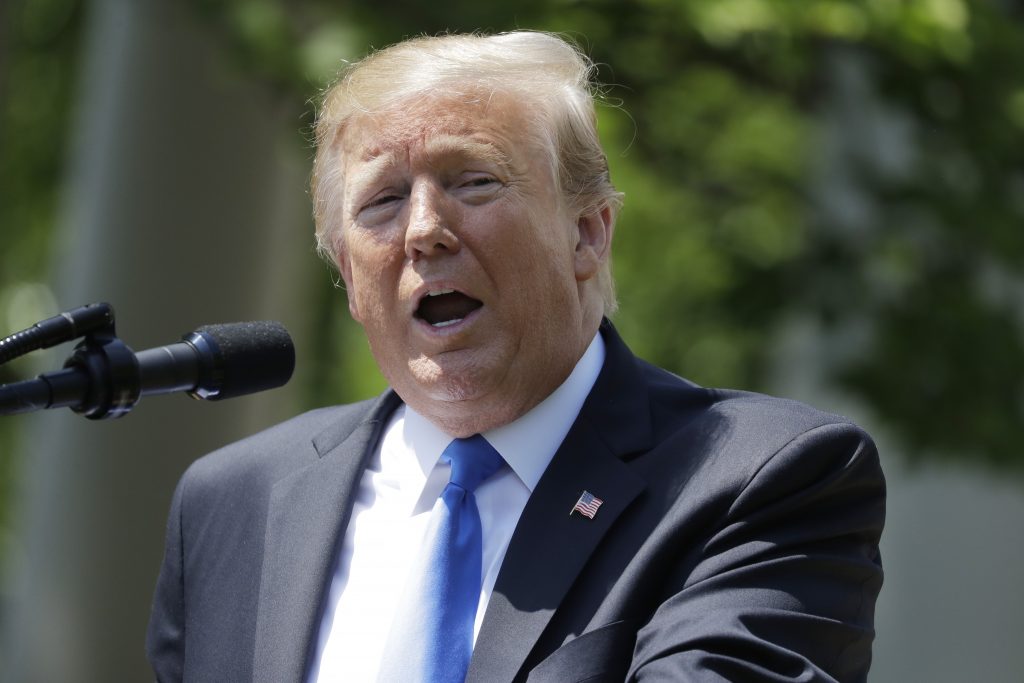 President Donald Trump on Monday joined prominent House Republicans in condemning Rep. Rashida Tlaib, D-Mich., for recent comments on the Holocaust and Israel that the freshman lawmaker says have been deliberately distorted to ignite attacks against her.

“Democrat Rep. Tlaib is being slammed for her horrible and highly insensitive statement on the Holocaust,” Trump said in a tweet. “She obviously has tremendous hatred of Israel and the Jewish people. Can you imagine what would happen if I ever said what she said, and says?”

The controversy was sparked by an interview published Saturday on Yahoo News’ “Skullduggery” podcast during which Tlaib, one of the first two Muslim women in Congress, was asked about her support for a one-state solution to the Israeli-Palestinian conflict.

Tlaib began her response by noting that the United States commemorated Holocaust Remembrance Day two weeks earlier. She then discussed her Palestinian ancestors and the founding of the state of Israel, saying she was “humbled by the fact that it was my ancestors that had to suffer” to create a safe haven for the Jewish people.

Two of the top House Republicans on Sunday criticized her use of the phrase “calming feeling,” accusing her of using the phrase to describe her views about the Holocaust itself.

“There is no justification for the twisted and disgusting comments made by Rashida Tlaib just days after the annual Day of Holocaust Remembrance,” House Minority Whip Steve Scalise of Louisiana said in a statement. “More than six million Jews were murdered during the Holocaust; there is nothing ‘calming’ about that fact.”

Rep. Liz Cheney of Wyoming, the No. 3 Republican in the House, issued a statement describing Tlaib’s remarks as “sickening.”

“I call on Speaker Pelosi and Leader Hoyer to finally take action against Representative Tlaib and other members of the Democratic caucus who are spreading vile anti-Semitism,” she said, referring to House Speaker Nancy Pelosi, D-Calif., and Majority Leader Steny Hoyer, D-Md. “All of us, regardless of party, must stand as Americans against the evil of anti-Semitism. If the Democratic leadership continues to stand by in silence, they are enabling the spread of evil.”

A spokesman for Tlaib did not immediately respond to a request for comment, but on Sunday night, Tlaib tweeted: “Policing my words, twisting & turning them to ignite vile attacks on me will not work. All of you who are trying to silence me will fail miserably. I will never allow you to take my words out of context to push your racist and hateful agenda. The truth will always win.”

Last month, the Zionist Organization of America (ZOA) called for the Democrats to expel Tlaib and pull her committee assignments over her “anti-Israel record” and her alleged association with “terrorists, anti-Semites and conspiracy theorists.”

Last month, Rep. Dan Crenshaw of Texas criticized Rep. Ilhan Omar of Minnesota for the way she phrased a reference to the attacks of Sept. 11, 2001. Other Republicans soon followed, including President Donald Trump, who tweeted a video that showed snippets of Omar’s comments interspersed with footage of the twin towers burning.