Technology Bald Eagle Deaths are Rare, But Not in This Part of Maryland
Health, Science & Technology 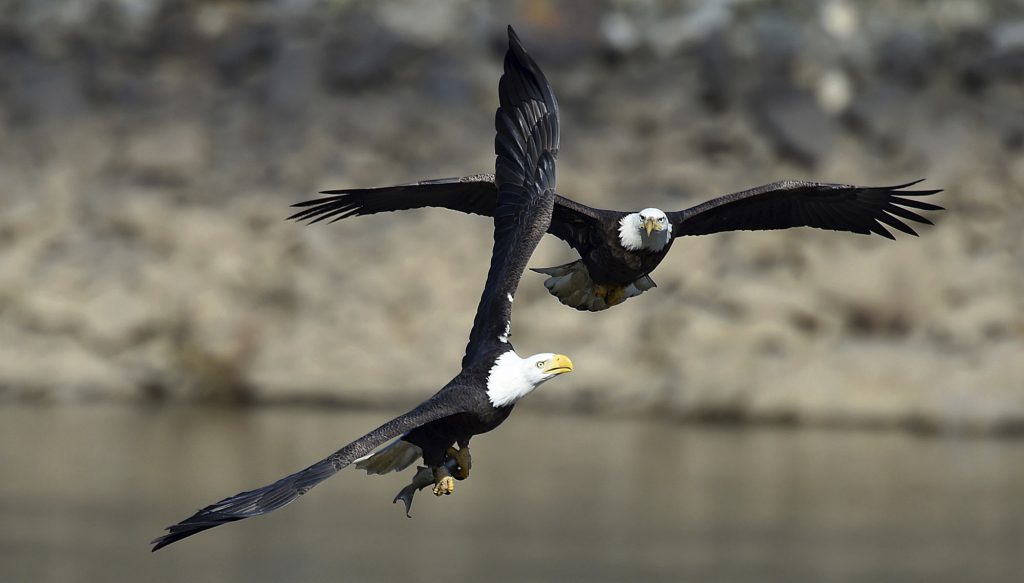 A once-common farm pesticide killed millions of birds before the U.S. government took steps to restrict its use in the 1990s and ban it in 2009. Since then, such poisonings have made up a small fraction of deaths among bald eagles, except in Maryland.

Pesticides were a suspected or confirmed factor in about 50 of more than 2,000 reported deaths of the national bird between 2008 and 2017, according to U.S. Fish and Wildlife Service data obtained by The Baltimore Sun through a Freedom of Information Act request.

That makes the poisoning deaths of about 25 bald eagles on the Delmarva Peninsula over the past three years, including at least seven since March 1, all the more troubling, authorities and conservation groups said.

Maryland Natural Resources Police said May 1 that seven bald eagles and a great horned owl have died in Kent and Talbot counties this year. They died under similar circumstances as 13 bald eagles near Federalsburg and five in southeastern Delaware in the spring of 2016, prompting police to call the epidemic “systemic to Maryland and specifically to the northern Delmarva Peninsula.”

The illegal chemical carbofuran has been confirmed to have killed some of the birds, including one sent from Maryland to a lab in Oregon to be tested this year, Natural Resources Police Lt. Roy Rafter said. Authorities say they think old stocks of the banned pesticide are being used to kill foxes and other farm pests, but is so toxic to birds that it is sickening the eagles that scavenge the dead animal remains.

It’s illegal to kill or harm a bald eagle by any means. A symbol of the nation, they are protected by the Bald and Golden Eagle Protection Act, which carries penalties up to a $250,000 fine or two years in prison. The federal Migratory Bird Treaty Act also protects great horned owls and hundreds of other bird species.

Authorities say they are at a loss to solve the mystery of the killings, after a fruitless investigation into the 2016 eagle deaths. They asked for anyone with information to contact them, offering a $10,000 reward. The American Bird Conservancy said it will add $5,000 to that.

“At best, it’s reckless, and, at worst, it could be a deliberate crime,” Parr said.

Fish and wildlife data show that collisions are the most common cause of bald eagle deaths, linked to about one in five of them. They often involve vehicles, and in about 30 cases over a decade, wind turbines. Electrocution kills nearly as many eagles as collisions do, while about 12 percent of eagle deaths are blamed simply on “trauma.”

The manner of about one in five eagle deaths is listed as unknown.

It’s not clear from the database where bald eagle deaths are most common, because the wildlife agency redacted any location information from the database, citing privacy concerns. The Baltimore Sun has requested the city and state where each eagle death was reported, but the agency did not make that information available last week.

Regardless of where they occur, deaths by pesticide poisoning are among the most rare investigated by authorities. The agency suspects or has confirmed lead poisoning killed about 140 eagles from 2008 through 2017, but that’s nearly three times the number of confirmed or suspected pesticide poisonings.

Carbofuran was once linked to widespread bird deaths, until the Environmental Protection Agency banned it in granular form in the early 1990s. In 2009, amid concerns that there was no safe level of carbofuran in the human food supply, its liquid form also was banned. It had been registered for use on crops including corn, soybeans, wheat, bananas and potatoes.

Philadelphia-based chemical manufacturer FMC Corp., which produced carbofuran under the trade name Furadan, said it has not sold the chemical in the U.S. since 2009. Asked about the recent eagle deaths in Maryland, a company spokeswoman said the use of carbofuran appeared to be “illegal and intentional” and said the company “condemns such misuse of any pesticide.”

Fish and Wildlife Service spokeswoman Christina Meister said she “could not speak to” how frequently carbofuran poisoning kills eagles across the country and did not make agency investigators or staff available to discuss the deaths.

Rafter, of the state natural resources police, said he had not heard of so many poisonings occurring elsewhere.

David Curson, director of bird conservation for Audubon Maryland-DC, said the number of poisoning deaths is small enough that it isn’t a concern for the larger population of bald eagles on the Eastern Shore, which is clustered around the marshes of Blackwater National Wildlife Refuge in Dorchester County. But he said it’s nonetheless concerning that pesticides are being used to kill the country’s national bird.

Parr said eagle lovers are urging investigators “to go after this as hard as they can,” and for citizens to come forward with any information. Given the national attention the 2016 killings received, whoever is responsible must be aware of the concern over carbofuran even if they unintentionally poisoned the birds, he said.

“It’s tragic,” he said. “It seems deliberate from our point of view.”