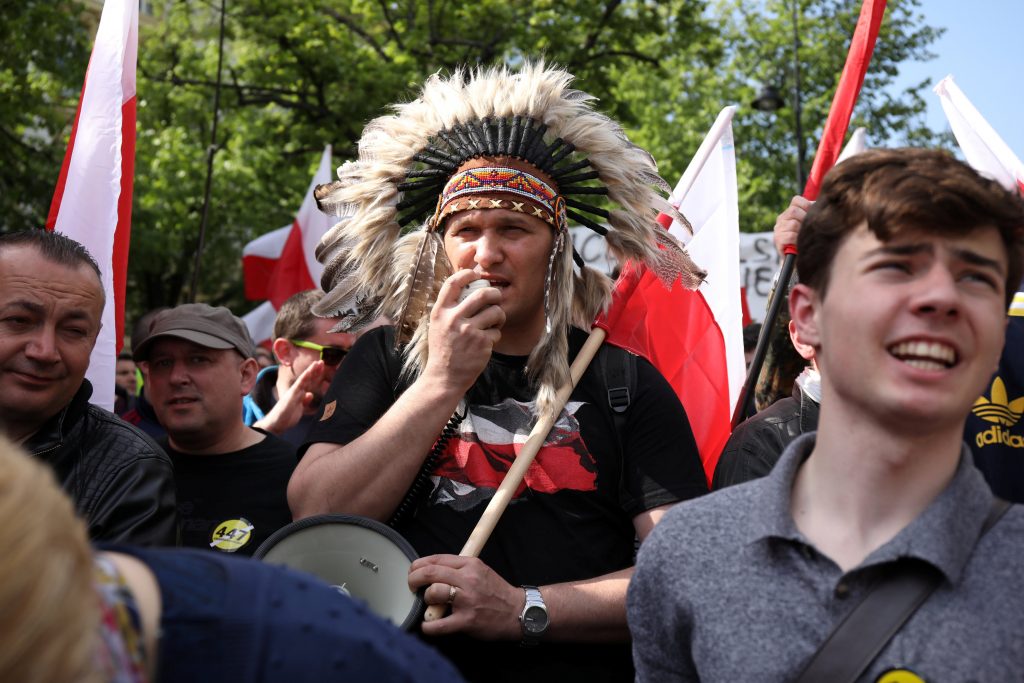 Hundreds of far-right supporters marched in Warsaw on Saturday to protest against a U.S. law on the restitution of Jewish property seized during or after World War II, an issue increasingly featuring in campaigns for upcoming Polish elections.

Carrying placards with slogans including “Poland has no obligations” and “Holocaust hyenas,” demonstrators marched from the prime minister’s office to the U.S. Embassy in central Warsaw.

Poland was home to one of the world’s biggest Jewish communities before it was almost entirely wiped out by the Nazi regime who set up death camps such as Auschwitz on Polish soil.

Former owners and their descendants have been campaigning since the fall of communism in 1989 to be compensated for lost property, which was seized by Poland’s authoritarian rulers but successive Polish administrations have lacked the money or determination to resolve the issue.

The nationalist Law and Justice (PiS) government has said that as a victim in World War II Poland should not be saddled with any financial obligations.

“We will not allow any damages to be paid to anyone because it is us who should get damages,” PAP quoted him as saying.

Poland will hold European parliament elections on May 26. Elections for its own parliament will take place in the autumn.

The Justice for Uncompensated Survivors Today (JUST) Act, or Act 447, requires the U.S. Department of State to provide a report to Congress on the progress of dozens of countries that signed a declaration in 2009 on the restitution of assets seized during or following World War Two.

The so-called Terezin declaration also includes provisions to give formerly Jewish-owned property with no heirs to Holocaust survivors in need of financial help or to support education on the subject.

On a visit to Warsaw on Wednesday, the U.S. State Department’s special envoy for monitoring and combating anti-Semitism, Elan Carr, said Act 447 only obliged the U.S. government to prepare a report on compliance with the Terezin declaration and it was up to Poland to decide how it would comply.

Polish far-right supporters have said that the law could result in Jewish organizations demanding as much as $300 billion in compensation.

More than three million of Poland’s Jewish population of 3.2 million were killed during the Holocaust, Hy”d.

The PiS party, which has been ahead in most polls for the European elections, has succeeded in building a broad coalition of conservative-minded voters, but critics have accused it of turning a blind eye to far-right extremism.