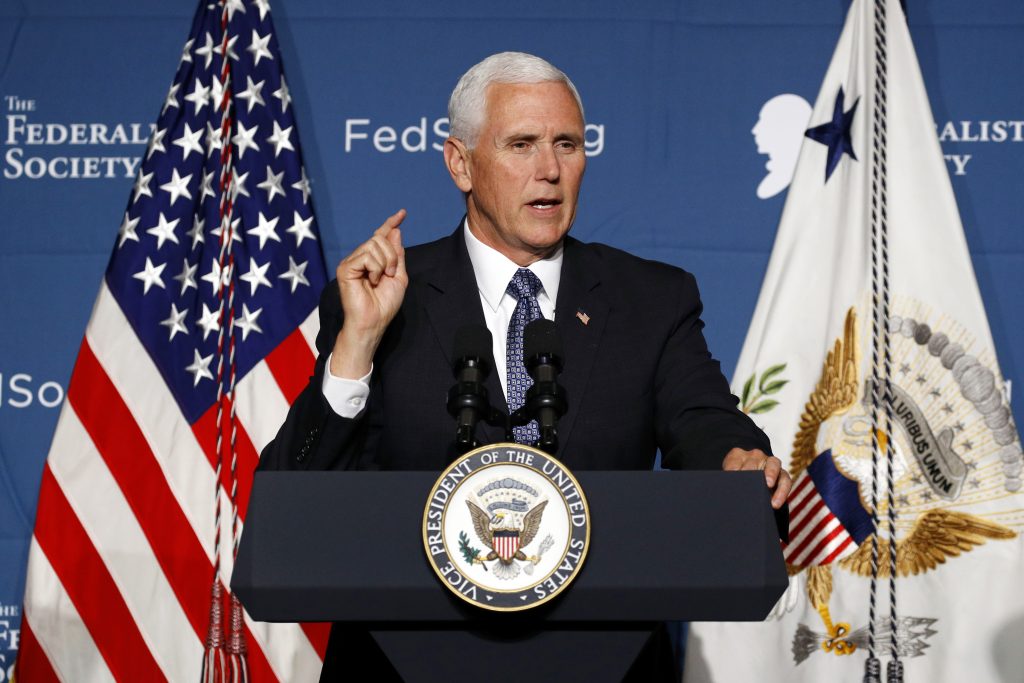 In a speech at the Federalist Society conference in Washington, Pence argued that nationwide injunctions issued by federal judges “prevent the executive branch from acting, compromising our national security by obstructing the lawful ability of the president to stop threats to the homeland where he sees them.”

He said the administration will seek opportunities to put this question before the Supreme Court “to ensure that decisions affecting every American are made either by those elected to represent the American people or by the highest court in the land.”

Top administration officials have often complained about the proliferation of nationwide injunctions since Trump became president, so the idea of pushing back is not new.

Indeed, the administration has asked the Supreme Court to deal with nationwide injunctions in the past, including in the travel ban case. But the court never addressed the nationwide extent of the injunction against the ban issued by lower courts because the justices upheld the ban in its entirety.

For the Supreme Court to issue a definitive ruling on nationwide injunctions, it would first have to rule against the administration on the underlying merits of the case before it. Only at that point could the court consider whether a lower court order should apply nationwide or only to the people who are challenging an administration policy.

A nationwide injunction has the effect of stopping “a federal policy everywhere,” the administration told the Supreme Court in the travel ban case. The more common practice is for a judge to issue an order that gives only the people who sued what they want.

A White House official said the administration would be looking for potential relevant cases to press the issue, and said Pence also discussed it at the end of the Cabinet meeting convened by the president on Wednesday.

In his remarks, Pence quoted from an opinion by Justice Clarence Thomas, who joined the majority opinion upholding the Trump travel ban last June, but also wrote separately to say nationwide injunctions “are legally and historically dubious” and that the high court would have to step in “if federal courts continue to issue them.”

Trump has long railed against district courts, especially the 9th Circuit, for blocking his initiatives, including efforts to overhaul the nation’s immigration system.

But Trump won a 2-1 ruling from the 9th Circuit on Tuesday that allows the administration to make asylum seekers wait in Mexico for immigration court hearings while a court challenge continues.