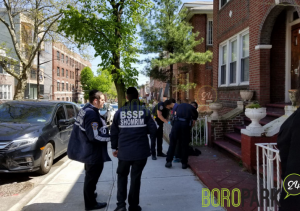 A thief who broke into a Hatzolah volunteer’s vehicle last night and made off with about $2,000 worth of equipment was found and arrested this afternoon.

A Hatzolah volunteer came to his car last night only to find an unexpected visitor taking off with items from his car, including two radios and the dashcam. The Hatzolah volunteer called Shomrim and Police, gave a detailed description of the perpetrator and field a police report.

This afternoon, a Shomrim volunteer on patrol spotted the described perpetrator walking on 43rd Street near 10th Avenue. After confirming with the Hatzolah volunteer that it was indeed him, he got additional volunteers to help him keep an eye on the perpetrator while police was notified. Police responded to the call and he was subsequently arrested.

All of the stolen items were recovered.