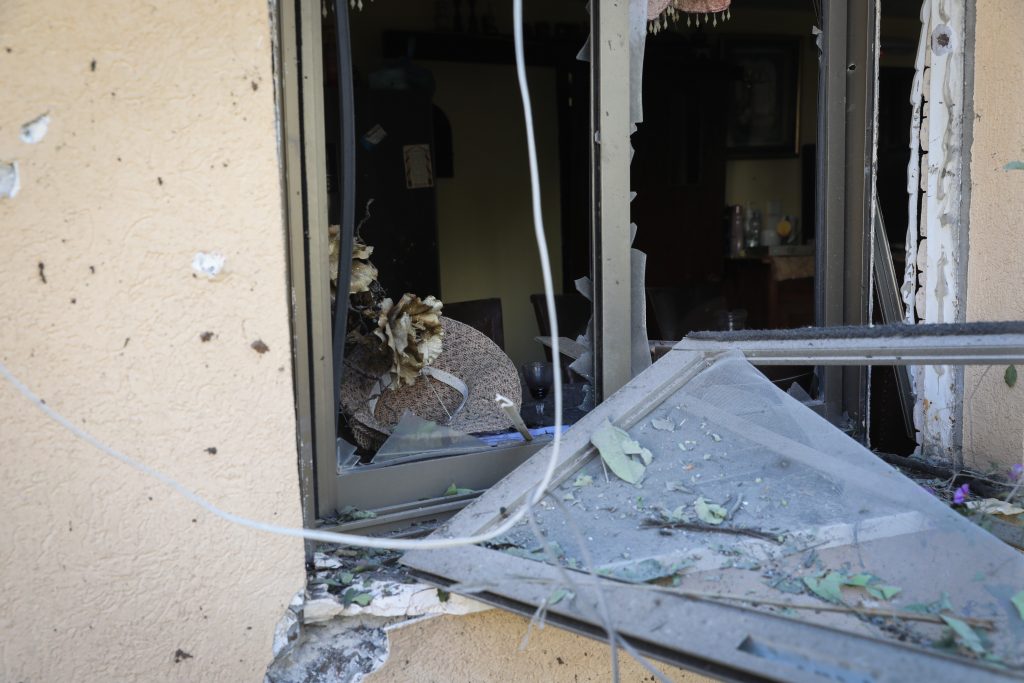 Moshe Agadi, Hy”d, a 58-year-old father of four from Asheklon, was named as the man killed in a rocket attack that hit outside his home in the southern city. Agadi was a member of an extended and veteran family in Ashkelon. Kan News quoted his brother Shmuel as saying that Agadi was killed when he went out of the bomb shelter he had been stuck inside for nearly the entire day on Shabbos to get a breath of fresh air. Ashkelon Mayor Tomer Galam said that the death of Agadi was “a difficult blow for the city, striking one of the best known families in the city.”

Agadi was killed when a rocket fired by Gaza Arab terrorists hit right next to his home at about 3:00 a.m. It was one of hundreds that were fired overnight by Gaza terrorists. According to the IDF, some 70% of the rockets have fallen in open areas, and the Iron Dome defense system destroyed 90% of the others. There were several breaks of several hours, but large numbers of attacks were reported again at around 5:00 a.m. and 7:30 a.m. During the latter hour, the roads would usually be full of buses transporting children to school, but school has been canceled due to the attacks. All schools within a 40-kilometer radius of the Gaza border – as far north as Kiryat Gat – are closed Sunday, with some 200,000 students remaining home.

The IDF responded to the overnight attacks by hitting 180 Hamas terror targets in Gaza, the army said. Among the targets was a cement factory in northern Gaza used by Islamic Jihad for the construction of terror tunnels, a mosque in the A-Shati refugee camp that was used as a site for the launching of rockets at Israel, and the home of the Hamas naval commander. Islamic Jihad said that two of its terrorists were killed in the overnight strikes.

U.S. peace process envoy Jason Greenblatt slammed Hamas and Islamic Jihad for the flare-up, saying that the terror groups “have engaged in yet another deplorable act of terrorism, indiscriminately firing hundreds of rockets at Israeli civilian communities. The U.S. stands firmly in support of Israel’s right to self-defense and we call on the international community to do the same.” Former U.S. Ambassador to the U.N., Nikki Haley, who is set to visit Israel in May, wrote in a social media post, “If this was any other country, the international community would raise havoc. No other country would sit back and take this. Why should Israel?”

The latest flare-up in the south began Friday afternoon, after Islamic Jihad terrorists fired at a group of IDF soldiers patrolling along the Gaza border, injuring one of them moderately and one lightly. The IDF responded by attacking Islamic Jihad targets, and the terror group responded with rocket fire, with Hamas joining in as well. The moderately injured soldier was said to be improving Motzoei Shabbos, doctors at Barzilai Hospital in Ashkelon said.

Red Alert warning sirens sounded throughout the Friday and on Shabbos, sending thousands to safe rooms as Gaza terrorist barraged southern Israel with rocket fire. Several rockets reached further afield, and warning sirens were sounded in Beit Shemesh, the Lachish region, Kiryat Gat and Ashdod. Most of the rockets either fell in open areas or were destroyed by Iron Dome missiles. Between Friday night and Sunday morning, Gaza terrorists have fired nearly 450 rockets at Israel, the IDF said.