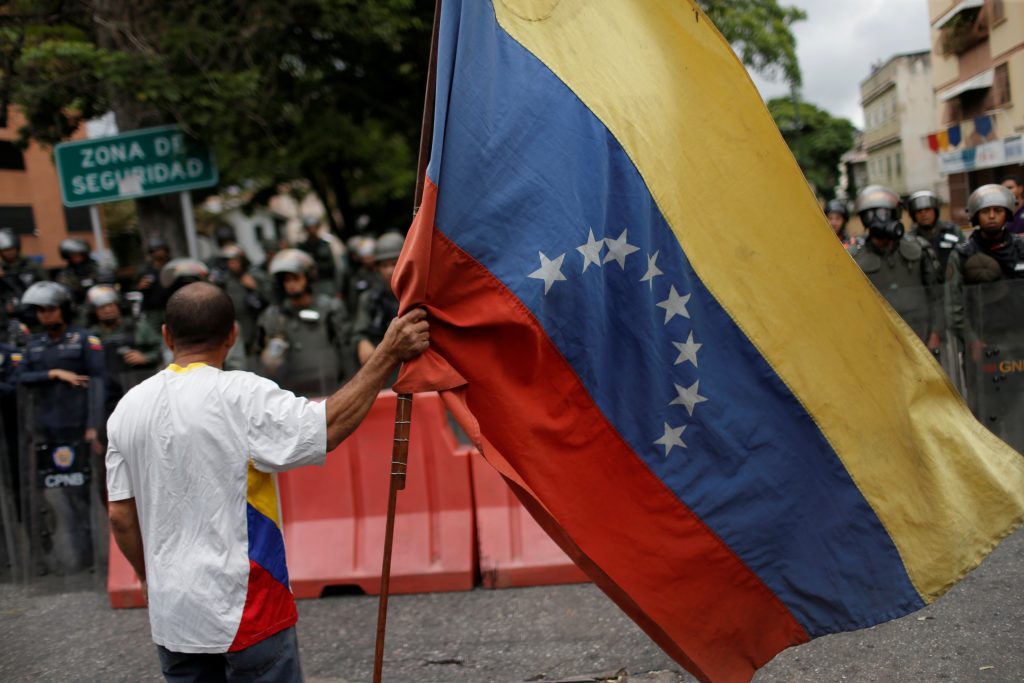 The Trump administration ended a week of pointed but vague threats of a military response to the Venezuelan political crisis with a meeting at the Pentagon to consider its options, though there was still no sign any action was on the horizon.

Shortly after Acting Defense Secretary Patrick Shanahan and other senior officials reviewed options in light of a failed effort earlier this week by Venezuelan opposition leaders to fuel an uprising, President Donald Trump said he discussed the situation with Russian President Vladimir Putin.

Trump, whose administration is seeking the ouster of President Nicolas Maduro and has recognized opposition leader Juan Guaido as president, said he and Putin share the goal of a peaceful end to the crisis.

“He is not looking at all to get involved in Venezuela, other than he’d like to see something positive happen for Venezuela,” Trump said. “And I feel the same way. We want to get some humanitarian aid. Right now people are starving.”

Trump’s reference to a hands-off Russian approach stands in contrast to assertions by Secretary of State Mike Pompeo that Russia is part of the problem in Caracas. Pompeo said earlier this week that Maduro was set to flee Venezuela until Russia persuaded him to stay.

In its description of the Trump-Putin conversation, the Kremlin said Putin stressed the need to respect Venezuelans’ right to determine their own future. He told Trump that outside interference in internal affairs and attempts at forceful regime change in Caracas undermine the prospects for a political settlement of the crisis.

The Pentagon has no direct role in Venezuela but has been consulting with the White House on ways it can support U.S. diplomacy and prepare for contingencies that could arise, including a crisis that endangers Americans in Venezuela.

In an interview with a small group of reporters Friday, Shanahan said Navy Adm. Craig Faller, commander of U.S. Southern Command, flew to Washington to meet with him and other senior officials, including Pompeo and John Bolton, Trump’s national security adviser.

The session highlighted the administration’s effort to suggest the possibility of military action, perhaps as a way of increasing public pressure on Maduro, although there appears to be little likelihood of direct U.S. military intervention.

They reviewed and refined military planning and options for responding to the crisis, Shanahan said. He declined to provide details and gave no indication they made decisions to take any military action.

“We have a comprehensive set of options tailored to certain conditions, and I’m just going to leave it at that,” he said. Pressed to say whether the options include direct military intervention, he said, “I’ll leave that to your imagination. All options are on the table.”

Faller’s area of responsibility includes Venezuela, and U.S. air and naval forces in the region are capable of conducting surveillance that could support intelligence collection inside Venezuela. The Trump administration’s emphasis has been on diplomatic and economic pressure to try to compel Maduro to step aside.

Asked whether Venezuela poses a national security threat to the United States that would justify using U.S. military force, Shanahan said Russia, China and Iran are involved in Venezuela, and then added, “Right now it’s about Maduro and his illegitimate regime, and Guaidó and making sure that the people of Venezuela have the environment and the conditions to correct for all these humanitarian shortcomings.”