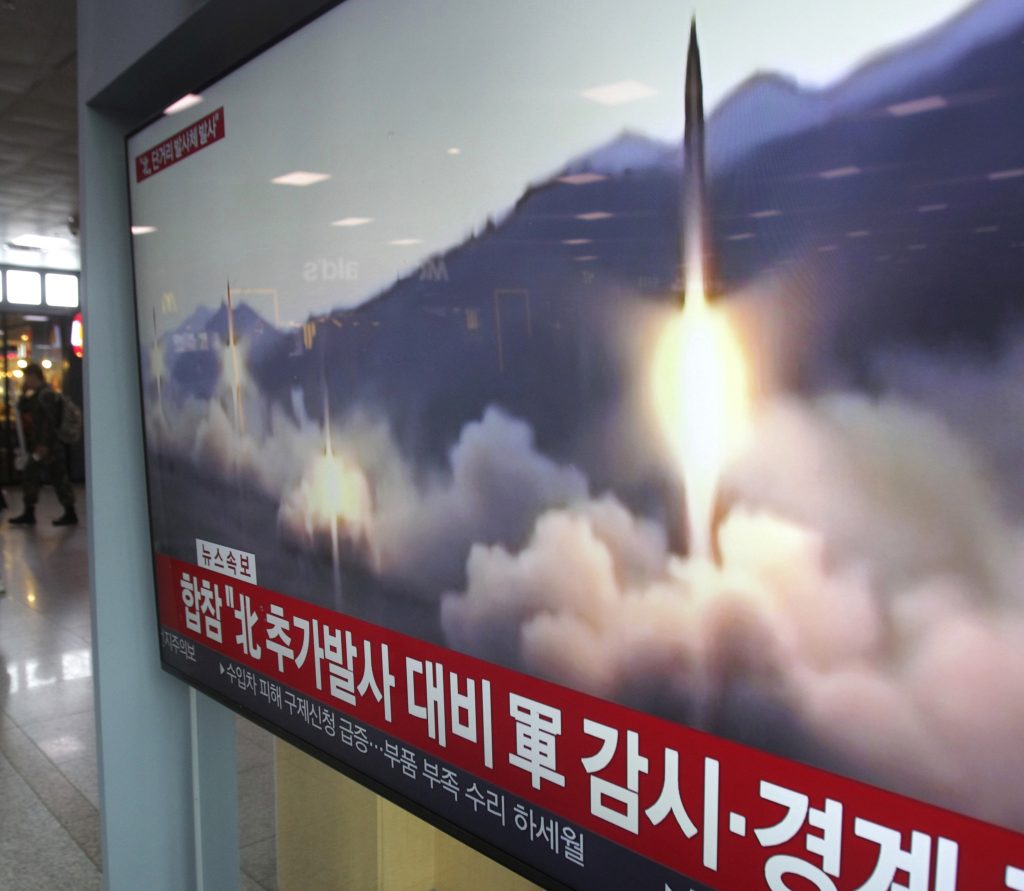 South Korea’s military has bolstered its surveillance in case there are additional weapons launches, and South Korean and U.S. authorities are analyzing the details.

If it’s confirmed that the North fired banned ballistic missiles, it would be the first such launch since the North’s November 2017 test of an intercontinental ballistic missile. That year saw a string of increasingly powerful weapons tests from the North and a belligerent response from President Donald Trump that had many in the region fearing war.

The South initially reported Saturday that a single missile was fired, but later issued a statement that said “several projectiles” had been launched and that they flew up to 200 kilometers (125 miles) before splashing into the sea toward the northeast. Experts say the North may increase these sorts of low-level provocations to apply pressure on the United States to agree to reduce crushing international sanctions.

The launch comes amid a diplomatic breakdown that has followed the failed summit earlier this year between Trump and North Korean leader Kim Jong Un over the North’s pursuit of nuclear bombs that can accurately target the U.S. mainland. The North probably has viable shorter-range nuclear armed missiles but still needs more tests to perfect its longer-range weapons, according to outside analysts.

Trump said Saturday that he still believes a nuclear deal with North Korea will happen. He tweeted that Kim “fully realizes the great economic potential of North Korea, & will do nothing to interfere or end it.”

Trump added: “He also knows that I am with him & does not want to break his promise to me. Deal will happen!”

White House Press Secretary Sarah Sanders said in a statement that the United States was aware of North Korea’s actions and would continue to monitor the situation.

South Korea said in a statement it’s “very concerned” about North Korea’s weapons launches, calling them a violation of last year’s inter-Korean agreements to reduce animosities between the countries. The statement, issued after an emergency meeting of top officials at the presidential Blue House in Seoul, also urged North Korea to stop committing acts that would raise military tensions and join efforts to resume nuclear diplomacy.

North Korea wants widespread sanctions relief in return for disarmament moves that the United States has rejected as insufficient. In a sign of Pyongyang’s growing frustration, it has recently demanded that U.S. Secretary of State Mike Pompeo be removed from nuclear negotiations and criticized national security adviser John Bolton. North Korea said last month that it had tested a new type of unspecified “tactical guided weapon.”

North Korea could choose to fire more missiles with longer ranges in coming weeks to ramp up its pressure on the United States to come up with a road map for nuclear talks by the end of this year, said Nam Sung-wook, a professor at Korea University.

“North Korea wants to say, ‘We have missiles and nuclear weapons to cope with [U.S.-led] sanctions,'” said Nam. “They can fire short-range missiles a couple more times this month, and there is no guarantee that they won’t fire a medium-range missile next month.”

During the diplomacy that followed the North’s weapons tests of 2017, Kim said that the North would not test nuclear devices or ICBMs. These short-range projectiles don’t appear to violate that self-imposed moratorium, and may instead be a way to register Kim’s displeasure with Washington without having the diplomacy collapse.

South Korea’s liberal president, Moon Jae-in, has doggedly pursued engagement with the North and is seen as a driving force behind the two summits between Trump and Kim.

South Korean Foreign Minister Kang Kyung-wha talked by phone with Pompeo about the North Korean launches, Kang’s ministry said in a statement. The ministry also said that South Korea’s chief nuclear envoy, Lee Do-hoon, had a telephone conversation with Stephen Biegun, the U.S. special representative for North Korea who is scheduled to travel to Seoul next week for talks.

Japan’s Defense Ministry said the projectiles weren’t a security threat and didn’t reach anywhere near the country’s coast. Japan will likely avoid any harsh response as Prime Minister Shinzo Abe seeks to secure his own summit with Kim.