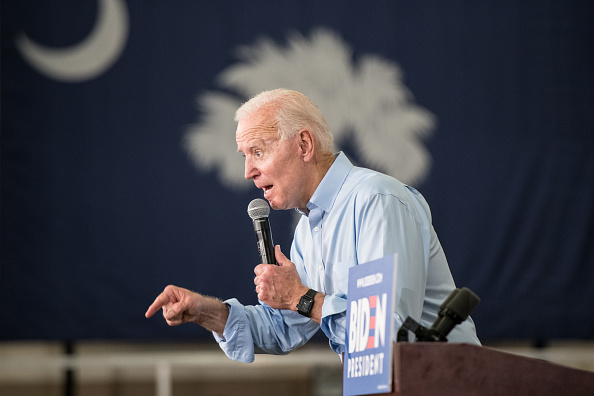 Former Vice President Joe Biden charged Saturday that Jim Crow is “sneaking back in” as he emphasized voting rights at his first presidential campaign stop in South Carolina, where black voters play a key role in the South’s first presidential primary.

“You’ve got Jim Crow sneaking back in,” he said, referring to the era before the civil rights movement. “You know what happens when you have an equal right to vote? They lose.”

Biden centered much of his trip around the need to restore decency to the White House. “Your state motto is, ‘While I breathe, I hope,'” he said at the rally after continuing his full-throated denunciation of President Donald Trump. “It’s not a joke. We’re breathing, but G-d, we have got to have hope.”

He kept up that theme at a private evening fundraiser, telling several dozen donors that he expects a nasty race from President Donald Trump.

“This guy is going to go after me and family,” Biden said, recalling his grandchildren telling him before his announcement that they expect Trump and others to bring up family details including his son Hunter Biden’s divorce.

Biden said there “are so many nicknames I want to give this guy,” and he drew laughter when he joked that he’d “start with clown.” But he added that he doesn’t want to respond in kind.

“The only place he has any confidence is in the mud,” Biden said, because the president “doesn’t understand how to respond to issues.”

Biden said he will answer Trump “directly” in the future without name-calling. He recalled saying in 2016 that in high school he’d have “taken him behind the barn and beat …” Trump. “Guess what? I probably shouldn’t have done that,” Biden said. “The presidency is an office that requires dignity and reestablishing respect and standing.”

Biden will continue his trip Sunday by worshipping at a black church in Columbia.

He opened his latest run for president with explicit appeals to white, working-class voters across the Midwest, pledging his support for unions and promising to rebuild the middle class. Now, Biden is trying to gauge whether his message will resonate among more diverse electorates. Black voters accounted for a solid majority of Democratic presidential primary ballots in 2016.

Ahead of her husband’s afternoon remarks, Jill Biden emphasized the couple’s long ties to South Carolina, saying they came to the state to grieve after their son Beau died of cancer in 2015.

“Joe and I love South Carolina,” she said.

The former vice president credited the late South Carolina Sen. Fritz Hollings with persuading him not to abandon public office after Biden’s first wife and daughter were killed in an auto accident weeks after his election to the Senate in 1972. Last month, Biden traveled to Charleston to eulogize his longtime desk mate and friend .

He also noted his long friendship with Rep. Jim Clyburn, one of the top-ranking House Democrats. Clyburn, who typically doesn’t endorse a candidate before the South Carolina presidential primary, didn’t attend Biden’s events.