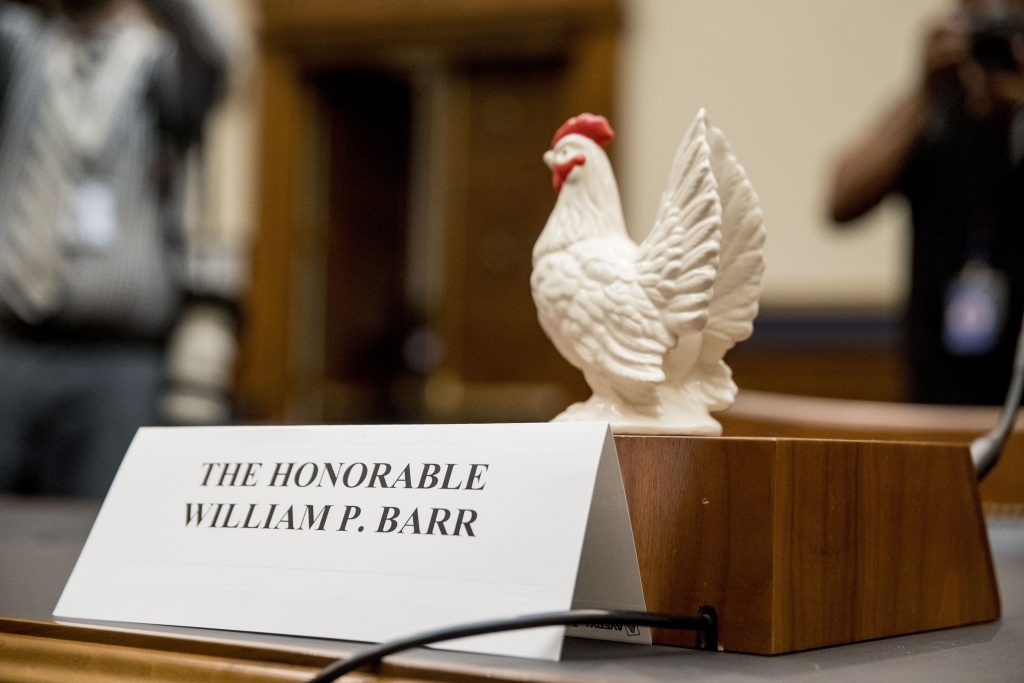 Barr’s decision to avoid the hearing, made after a disagreement with the House Judiciary Committee over questioning, came the day after the department also missed the committee’s deadline to provide it with a full, unredacted version of Mueller’s report and its underlying evidence. In all, it’s likely to prompt a vote on holding Barr in contempt and possibly the issuance of subpoenas, bringing House Democrats and the Trump administration closer to a prolonged battle in court.

Democrats convened a short hearing that included an empty chair with a place card set for Barr. Committee Chairman Jerrold Nadler of New York said that if the attorney general doesn’t provide the committee “with the information it demands and the respect that it deserves, Mr. Barr’s moment of accountability will come soon enough.”

Shortly afterward, Pelosi escalated the tensions further. In possible reference to the attorney general’s testimony earlier this month, Pelosi said Barr “was not telling the truth to the Congress of the United States — that’s a crime.”

Barr told senators on April 10 that he didn’t know whether Mueller agreed with his conclusions about the report, including Barr’s assertion that Mueller hadn’t found enough evidence to support a charge of obstruction of justice. Democrats have raised questions about that testimony since it was revealed this week that Mueller had written Barr on March 27 complaining that the attorney general had not properly portrayed his findings in a four-page memo summarizing the report’s main conclusions.

Barr said Wednesday his answer was not misleading because he had been in touch with Mueller, rather than members of his team, and that the concerns were mostly about process and not substance. Within minutes of Pelosi’s comments, Justice Department Spokeswoman Kerri Kupec called her words “reckless, irresponsible and false.”

Pelosi also said the administration’s refusal to respect subpoenas by a House committee is “very, very serious” and noted that ignoring congressional subpoenas was one of the articles of impeachment against former President Richard Nixon.

As Democrats portrayed Barr as untruthful, they sought to speak to Mueller himself. Nadler said the panel hoped the special counsel would appear before the committee on May 15 and the panel was “firming up the date.”

It’s unclear whether Barr will eventually negotiate an appearance with the House panel. Nadler said he would not immediately issue a subpoena for Barr’s appearance but would first focus on getting the full Mueller report, likely including a vote holding Barr in contempt of Congress.

While a contempt vote would make a strong statement, it is unlikely to force the Justice Department to hand over the report. A vote of the full House on contempt would send a criminal referral to the U.S. attorney for the District of Columbia — a Justice Department official who is likely to defend the administration’s interests. But even if the U.S. attorney declines to prosecute, Democrats could pursue other avenues in court or even issue fines against witnesses who fail to appear.

“In the past they had a House jail,” said Rep. Ted Lieu, D-Calif., a member of the Judiciary panel. “I don’t think we’re going to go that far, but courts have upheld that.”

At Barr’s no-show hearing, Democratic members of the committee had fun with the spectacle, passing around fried chicken and placing a prop chicken by Barr’s unused microphone to underscore their contention that he was afraid to appear. One lawmaker jokingly looked under the desk to make sure Barr wasn’t there.

Republicans were not amused by the antics or Nadler’s tough talk.

“The reason Bill Barr isn’t here today is because the Democrats decided they didn’t want him here today,” said the top Republican on the panel, Georgia Rep. Doug Collins. Nadler had demanded that staff attorneys, in addition to lawmakers, be allowed to question Barr. Barr said he wouldn’t attend under that condition.

The attorney general’s cancellation meant he would avoid another round of sharp questioning after testifying Wednesday before the Senate Judiciary Committee. Democrats on the panel contended that Barr was protecting President Trump after he assessed Mueller’s report on his own and declared there wasn’t enough evidence that the president had committed obstruction of justice. Mueller didn’t charge Trump with obstruction but wrote that he couldn’t exonerate him, either.

The standoff with the Justice Department is one of several fights House Democrats are waging with the Trump administration. Trump has vowed to battle “all of the subpoenas” as multiple committees have sought to speak with administration officials or obtain documents relevant to his policies and finances. Democrats have signaled they won’t back down and will take the steps necessary — including in court — to get the White House to comply.

President Trump criticized Democrats for demanding too much of Barr, telling Fox Business Network’s Trish Regan Wednesday night that “they want to treat him differently than they have anybody else.”